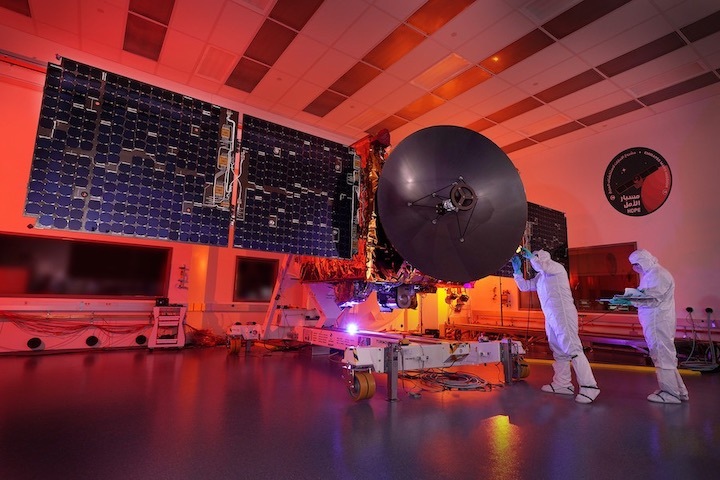 The Arab world’s first Mars probe has arrived at its launch site in Japan after officials navigated coronavirus-related quarantine protocols and travel restrictions to ensure the spacecraft can launch on time in July.

The Mars orbiter arrived at the Tanegashima Space Center in Japan on April 24 after a multi-day journey from Dubai via air and sea transport, ready to begin final testing, fueling and other preparations for liftoff during a three-week window opening July 14 (U.S. time) aboard a Japanese H-2A rocket.

Funded by the United Arab Emirates, the Emirates Mars Mission — known as Hope, or Al Amal — was developed in a partnership between the Mohammed Bin Rashid Space Centre in Dubai and the Laboratory for Atmospheric and Space Physics at the University of Colorado at Boulder.

Although the mission packs scientific punch, the government of the UAE also devised the project as a way to catalyze changes in the country’s academic and industrial sectors to focus more on technology and innovation. The mission is also timed to arrive at Mars before the 50th anniversary of the country’s independence in December 1971.

“The identity of the mission is not just about the UAE, it’s also for the Arab world,” said Omran Sharaf, project manger for the Emirates Mars Mission. “It’s supposed to inspire the Arab youth, and send a message of hope to them, and a message that basically tells them if a country like the UAE is able to reach Mars in less than 50 years, then you guys can do much more given the history you have, given the human talent that you have.”

Carrying three science instruments, the Hope mission will measure conditions in the Martian atmosphere from a unique semi-synchronous orbit high above the Red Planet. The mission is the first from the Arab world to travel to another planet.

About the size of Mini Cooper, the spacecraft was assembled at LASP’s facilities in Colorado, with the help of Emirati engineers and scientists. The probe was delivered to Dubai in February for additional testing, and then was supposed to be transported to Japan in early May.

But the coronavirus pandemic forced officials to shuffle the schedule, and mission managers decided to send the probe to Japan early.

“We did have to ship it earlier than planned due to the situation currently with COVID-19, and the restrictions that have been imposed around the world when it comes to travel and shipping stuff,” Sharaf said. “It did significantly increase the risks within the mission. For us, to mitigate this risk, we thought the best way to do it was to ship it as early as possible to Tanegashima, and send the team there as early as possible.”

The decision to ship the spacecraft to the launch site early forced engineers in Dubai to curtail some of the planned testing on the probe, but Sharaf said all critical checks were completed before the orbiter left for Japan.

Sharaf dispatched 11 engineers and technicians in early April to Japan, where they spent two weeks in quarantine to ensure they had no symptoms of the COVID-19 viral disease.

On April 20, the Hope spacecraft left the Mohammed Bin Rashid Space Centre in Dubai to begin the four-day journey to Tanegashima, located off the southern coast of the Japanese island of Kyushu, the southernmost of the country’s main islands.

Packaged inside a climate-controlled shipping container, the spacecraft rode an Russian-operated, Ukrainian-built Antonov An-124 cargo plane from Dubai to Nagoya, Japan. The final phase of the journey occurred a ship, which carried the probe from Nagoya to Tanegashima Island.

“This was supposed to be a quiet phase, in which we’re all set and finished and ready to launch,” Sharaf said in an interview with Spaceflight Now. “We were supposed to send it in early May, and it was supposed to be quite a relaxed schedule. But COVID-19 found a way to keep us busy.”

Six members of the Emirates Mars Mission team accompanied the spacecraft to Japan. Once there, they began their own two-week quarantine period as mandated by the Japanese government, Sharaf said.

When they complete the quarantine period, the personnel will join the 11 engineers and technicians that traveled to Japan earlier in Japan to complete final testing on the spacecraft inside a payload processing facility clean room at Tanegashima.

“As a mitigation plan, I have to have a backup team ready in Dubai just in case I need to send them to Japan in case something happens,” Sharaf said. “Before, we were going to send everyone there, and send people back and forth as needed. Some people were going to go there for two weeks, then they were going to come back, then after another two weeks go there as needed. But we changed the philosophy. We had to actually adapt to the situation.

“So we sent everyone there that needs to be there, the critical ones, and then I had to make sure that I had backups in Dubai,” Sharaf said. “I had to separate the teams … It will take about 50 days to prepare the spacecraft for launch, and given the quarantine period the team has to go through, that’s some extra days. So shipping it early was quite beneficial.”

Many of the tests engineers will perform on the spacecraft at Tanegashima will double- or triple-check work accomplished prior to the probe’s shipment to Japan.

“Whatever tests we’ll be doing in Japan, we’ve confirmed it already here,” Sharaf said. “The only thing that we need to do now in Japan that we didn’t do is actually after we fill up the tank with hydrazine gas.

“Once we do that, there’s a specific test we do for the propulsion system and for the tanks to make sure that everything’s OK and there’s no leakage,” Sharaf said. “And then we are ready to launch. This is one of the final things that takes place.”

More than half of the spacecraft’s weight at launch will be comprised of hydrazine fuel. Fully loaded, the orbiter will weigh nearly 3,000 pounds (1,350 kilograms) at the time of liftoff.

The spacecraft will be encapsulated inside nose shroud of its H-2A rocket, then raised on top of the launcher inside a vertical assembly building at Tanegashima before rollout to the launch pad.

The UAE Space Agency and the Mohammed Bin Rashid Space Centre, or MBRSC, booked a dedicated launch on an H-2A rocket with Mitsubishi Heavy Industries in 2016.

The launch window opens July 14 (July 15 in Japan) and extends three weeks. Interplanetary missions taking a direct route to Mars must launch in certain periods every 26 months, when Earth and Mars are in the right positions in the solar system.

Two other Mars missions are scheduled for launch in July.

NASA Perseverance rover is set for liftoff as soon as July 17 from Cape Canaveral aboard a United Launch Alliance Atlas 5 rocket. China’s first Mars rover is due to depart Earth the same month on top of a Long March 5 launcher.

The Hope mission will enter orbit around Mars in February 2021, the same month the U.S. and Chinese missions arrive at the Red Planet.

Like the spacecraft itself, the Hope probe’s three science instruments were developed in a cooperation between research institutions in the United States and the United Arab Emirates.

The sensors will scan the Martian atmosphere, joining a fleet of NASA, European Space Agency and Indian spacecraft currently operating at the Red Planet.

“The motivation behind the Emirates Mars Mission science is covering the lower atmosphere of Mars throughout an entire Martian day, and sampling it throughout all of the seasons on Mars,” sad Sarah Al Amiri, chief scientist on the Hope project and the UAE’s minister of state for advanced sciences.

After swinging into an initial capture orbit next February, the Hope spacecraft will maneuver into an operational science orbit around April 2021 that ranges between approximately 12,400 miles (20,000 kilometers) and 26,700 miles (43,000 kilometers) above Mars.

During parts of each 55-hour orbit, the spacecraft’s move at roughly the same speed around Mars as the planet’s rotation. That will give the orbiter’s science instruments sustained views of the same region of Mars.

The Hope mission will pursue many of the same science objectives as NASA’s Mars Atmosphere and Volatile Evolution, or MAVEN, spacecraft. MAVEN arrived at the Red Planet in 2014.

Scientists have analyzed data from the MAVEN mission to confirm that the bombardment of the solar wind and radiation stripped away the Martian atmosphere, transforming the planet from a warmer, wetter world into the barren planet of today.

Hope will track oxygen and hydrogen escaping from the Martian atmosphere into space, and will peer deeper into the planet’s atmosphere than MAVEN. Scientists want to investigate possible links between Martian weather and climate with the escape of atmospheric particles.

Sharaf said U.S. personnel were embedded together with Emirati teams in instrument and spacecraft engineering groups during the Hope mission’s development.

The training aspect of the Hope mission is similar to the way Emirati engineers worked with a South Korean company to build the DubaiSat 1 and 2 Earth-imaging satellites, which launched in 2009 and 2013. Using lessons learned from that experience, UAE teams took on more responsibility in building the KhalifaSat Earth observation satellite that launched in 2018.

“The direction for the government was to build it, don’t buy it,” Sharaf said of the Emirates Mars Mission. “Work with others, learn from others, don’t start from scratch. Start where others ended, so complement their work. However, you need to build it, you’re not going to buy it. Obviously, there is going to be risk associated with that, especially since it’s the first mission we’ve built that goes to Mars.

“COVID-19, by itself, was a big risk because one of the objectives that was set by the government for us … was to reach Mars before the 2nd of December 2021, which is the 50th anniversary of the establishment of the UAE,” Sharaf said. “So missing the launch opportunity this year means that we actually would not meet an important goal that has been set for the mission.”