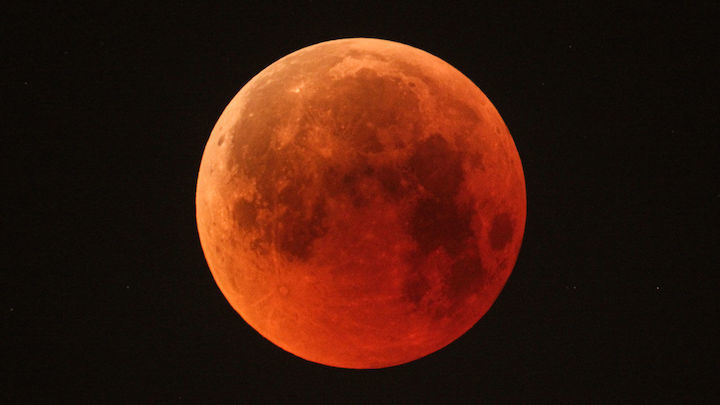 A total lunar eclipse typically appears red, but not after a large volcanic eruption.

On 5 May 1110 C.E., the night of a lunar eclipse, the Moon did not take on its normal reddish hue. Despite otherwise clear skies, it “was so completely extinguished withal, that neither light, nor orb, nor anything at all of it was seen.” So reported a version of the Anglo-Saxon Chronicle, a series of medieval manuscripts compiled in Old English. Now, by combining this report with an analysis of tree-ring records and ice cores, scientists have deduced the reason why the Moon became so dark: a set of volcanic eruptions in the early 12th century. The eruptions had widespread climatic effects, causing temperatures in the Northern Hemisphere to drop by about 1°C, the scientists report.

After a volcanic eruption, ash and sulfate aerosols—tiny particles created when volcanic gases react with the atmosphere—eventually rain back down to Earth. Some of this fallout inevitably lands on snow, which is compacted over time into ice. Ice cores are therefore “one of the best archives available” for tracing past eruptions, says Sébastien Guillet, a paleoclimatologist at the University of Geneva.

Guillet and his colleagues mined existing records of three ice cores: two from Greenland and one from Antarctica. Cores from both places revealed sulfate spikes—one in the Antarctic core in 1109 C.E., and several in the Greenland ice cores from 1108–1113 C.E. Some scientists believe the spikes are consistent with the eruption of a single large volcano in the tropics around 1108 C.E., which would have caused aerosols to rain down around the globe for several years.

But accurately dating ice cores is notoriously tricky. So Guillet and his colleagues turned to other records to verify that one or more eruptions actually took place early in the 12th century.

The team started with tree ring records from North America, Europe, and Asia. Because trees grow thinner rings in colder weather, the researchers were able to reconstruct past temperatures in the Northern Hemisphere. They found that 1109 C.E. was about 1°C cooler than normal. They say a volcanic eruption was likely responsible, because aerosols suspended in the atmosphere block sunlight and cool the planet. (Temperatures dropped by a similar amount after the eruption of Mount Pinatubo in the Philippines in 1991.)

The team next combed through 17 European and Near Eastern manuscripts that referenced lunar eclipses that occurred between 1100 and 1120 C.E. A total lunar eclipse, which occurs when the Moon passes into Earth’s shadow, typically appears red thanks to how sunlight is filtered through the planet’s atmosphere. But volcanic aerosols can block sunlight and darken lunar eclipses.

Guillet and his collaborators found references that one lunar eclipse—on 5 May 1110 C.E.—was unusually dark. That’s consistent with at least one eruption occurring around 1108 C.E., which supports the ice core records, Guillet and his colleagues concluded last month in Scientific Reports.

The team pinpointed a plausible suspect: Japan’s Mount Asama, which records indicate erupted in 1108 C.E. Its sulfates could have reached Greenland but probably not Antarctica, Guillet says. “Atmospheric circulation makes it very difficult for eruptions located at high latitudes to cross the tropics.” (A single eruption in the tropics would suffer from the same circulation problems, the team suggests.) That means at least one other eruption must have occurred around the same time, Guillet and his colleagues conclude, but the identity of that eruption remains an enigma.

One way to resolve that mystery is to look for tiny bits of volcanic ash in ice cores, says Michael Sigl, a chemist at the University of Bern in Switzerland who focuses on volcanic eruptions. Ash, which is shards of volcanic glass, has unique geochemical fingerprints, he says. “That can be linked to the source volcano.”