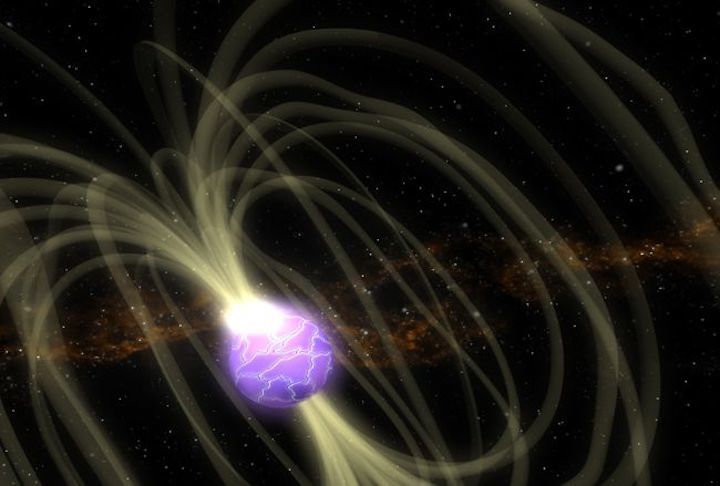 Paul M. Sutter is an astrophysicist at SUNY Stony Brook and the Flatiron Institute, host of Ask a Spaceman and Space Radio, and author of "Your Place in the Universe." Sutter contributed this article to Space.com's Expert Voices: Op-Ed & Insights.

Magnetars — highly magnetized, rapidly rotating super-dense stars — are among the most enigmatic creatures to inhabit the cosmos and their origins are shrouded in mystery.

Do they come from supernova explosions of dying stars? Are they born when stellar corpses collide? Or do they magnetize when material spirals in to a dormant pulsar, a rapidly spinning dense neutron star that produces bright jets?

New research suggests an entirely different route: a stellar corpse called a white dwarf crashes into a neutron star, producing an extremely powerful explosion and leaving behind a magnetar.

The mystery of FRBs

Over the past few decades, astronomers have spotted incredibly bright, brief and strange bursts of radio energy, known as fast radio bursts, or FRBs. To date, a little over 100 FRBs have been detected across the sky. Whatever they are, they are almost certainly coming from outside our Milky Way galaxy — otherwise scientists would have seen them concentrated along the band of our galaxy, instead of all over the sky.

With a few notable exceptions, FRBs don't repeat. They are one and done, representing an ridiculous amount of energy spilled into the cosmos in less than a second. To make matters even more mysterious, the FRBs for which astronomers have managed to pinpoint an origin (not an easy task, because the phenomenon is so brief) are not associated with any one particular kind of galaxy or another.

The diversity of sources suggests that different kinds of processes in the universe — all of them violent — lead to the formation of fast radio bursts. Whatever the processes are, they require tremendous amounts of energy and occur quite rapidly.

Mergers between stars are an interesting candidate. When one star crashes into another, there's obviously a lot of energy flying around. And while stars can take eons to get close enough to merge, the act itself is a brief moment of intense fury.

But regular stars merging simply isn't enough to power a full-fledged FRB. To get the required energies, you have to merge more exotic objects, like neutron stars and white dwarfs. Only then will you have the masses and densities required to really get a party going.

One merger scenario to potentially generate an FRB is the merger of a white dwarf with a neutron star. Both neutron stars and white dwarfs are exotic types of dead remnants of once-normal stars.

A white dwarf is the planet-size leftover core of a star like our sun, a lump of carbon and oxygen slowly cooling off as the cosmic ages progress. A neutron star is like a white dwarf but moreso: it's the leftover core of a much more massive star, composed almost entirely of neutrons compressed into a ball no bigger than a city.

Since stars are often born in pairs, it's not crazy to think that after enough time, both stars in a system could die, leaving behind their particular kind of dead cores — and that slowly, slowly, slowly, those dead lumps could circle closer together, finally reaching a critical point at which their gravitational interaction overwhelms everything, sending the stellar corpses spiraling in toward each other (and their doom).

Right at the cusp of their final collision, one of two scenarios could play out. In one case, the white dwarf can puff up, letting the outer tendrils of its atmosphere escape and funnel down to the neutron star. In the other, the extreme gravity of the neutron star completely shreds the white dwarf and its tattered stellar corpse rains down onto its heavier, denser sibling.

In either case, a tremendous amount of mass transfers to the white dwarf and onto the neutron star, and that's when the fun really begins, according to new research.

Powering up the monster

The scientists behind the new research want to know whether a merger between a white dwarf and a neutron star could be just right to trigger the escalation of an extreme magnetic field. At first, the infalling material (whether stripped from the white dwarf or made of the torn-up white dwarf itself) spirals onto the neutron star.

As it falls, it accelerates the rotation of the neutron star, like a grown-up pushing on the merry-go-round at the playground, to the delight and horror of the kids on it. Soon, the neutron star is spinning faster than the blades of your kitchen blender.

At last, the magnetar is born. (At least, according to this theory.)

Like a newborn baby, the magnetar comes into the world screaming and crying. It's unstable; because of all the chaotic forces from the merger, it hasn't settled into a regular rhythm of rotation yet. And because that rotation is so fast, any little glitch or hitch will release a powerful blast of energy in the form of electromagnetic radiation, the scientists suggest.

And radio waves — like those massive outbursts of FRBs — are electromagnetic radiation.

The new research suggests that at least some of the FRBs we observe in the skyare the cries of newly born magnetars, created from the cosmic crash of neutron stars with white dwarfs. If the premise is correct, it's nearly poetic: the collision of two exotic stellar remnants, creating yet another strange inhabitant of the cosmos, giving rise to one of the most extreme bursts of energy known to astronomers, a burst of radiation so intense that it can be witnessed from across the universe.

It's perhaps the most difficult childbirth in the cosmos.

The research is described in a paper published April 8 in the Astrophysical Journal.