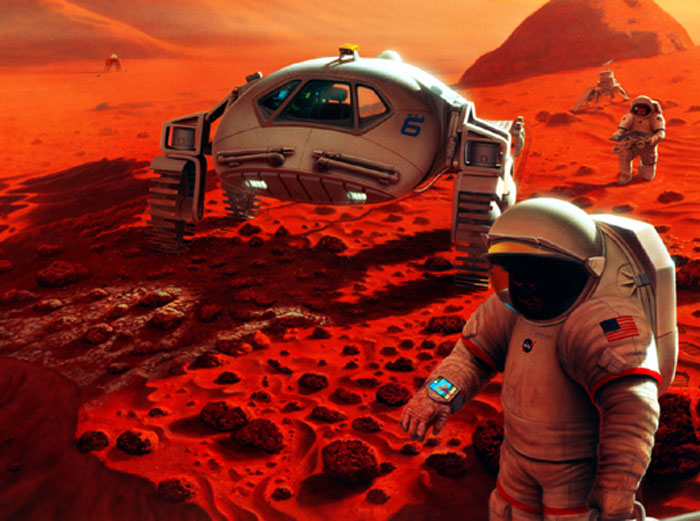 Someday, human explorers might momentously discover fossils on Mars, proving that the Red Planet once supported extraterrestrial life. An interplanetary expedition of this sort will have overcome major obstacles, such as spacecraft design and the rigors of a many-month voyage. Yet a more subtle challenge to this hypothetical mission's success must, too, be addressed: astronauts will have to perform effective field work while clad in airtight, probably unavoidably cumbersome spacesuits.
The limitations that spacesuits place on their wearers became evident during the Apollo missions. Astronauts found they tired easily and that ordinary tasks took far longer. Due to limited consumables—chiefly, oxygen—the astronauts had to work under severe time constraints, making careful, detailed scientific field study on the Moon that much harder.
"When you go and do something on another world in a spacesuit, it's not just more energy involved, it's time as well. Activities are harder and take longer," said David Willson, who studies spacesuit operations at NASA's Ames Research Center in Moffett Field, Calif.
Willson said that Apollo astronaut Harrison Schmitt, the only professional geologist to have set foot off-Earth, spoke of how difficult routine field work became while suited up. "Schmitt said you had to be a very good field scientist in order to get any real science done," Willson said. "Your mind is focused on moving around in the spacesuit and doing little tasks . . . You don't have much energy or the brain space for thinking things through, or 'thinking science,' so to speak."
. 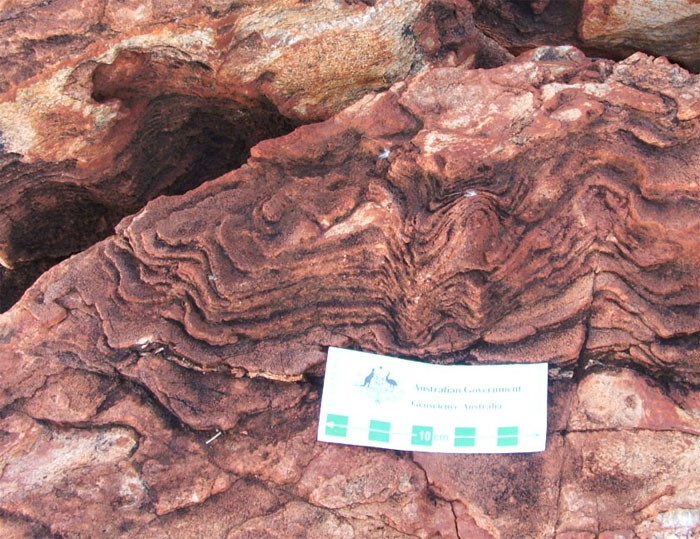 An example of a fossilized stromatolite. Credit: Willson et al
.
Willson is lead author of a new study that aims to gauge how working in a spacesuit could compromise scientific returns on a future Mars mission. The preliminary research indeed showed that 25 percent more fossil evidence was missed, with more incorrect identifications, while space-suited compared to surveying naturally (in regular clothes) and with additional available time. On a real-life Red Planet safari, such a discrepancy could be what separates a discovery for the ages from the astronauts coming up empty-handed.
Out in the Outback
These insights came from a field experiment Willson and colleagues conducted in 2011 in the Western Australian Outback. As part of a Spaceward Bound expedition—a NASA program that puts teachers and students side-by-side with NASA field scientists—Willson and others were in the Pilbara region to check out ancient fossils called stromatolites. These layered structures, created by heaps of microbes in shallow water, represent the earliest signs of life on Earth. (Stromatolites still exist today, for example in Shark Bay, Western Australia.) Some of those stromatolites on "The Dawn of Life" trail in Pilbara have been dated to 3.45 billion years old.
The researchers bet that stromatolites make for decent analogs of the potentially fossilized remains of visible Martian surface life. Around when stromatolites arose on Earth, Mars was thought to also be a warm, wet place, unlike the arid, freezing desert it eventually became in subsequent eons through today. The Nili Fossae region of Mars, in particular, has a mineralogy consistent with it having been a once-habitable, water-covered place, like Pilbara.
. 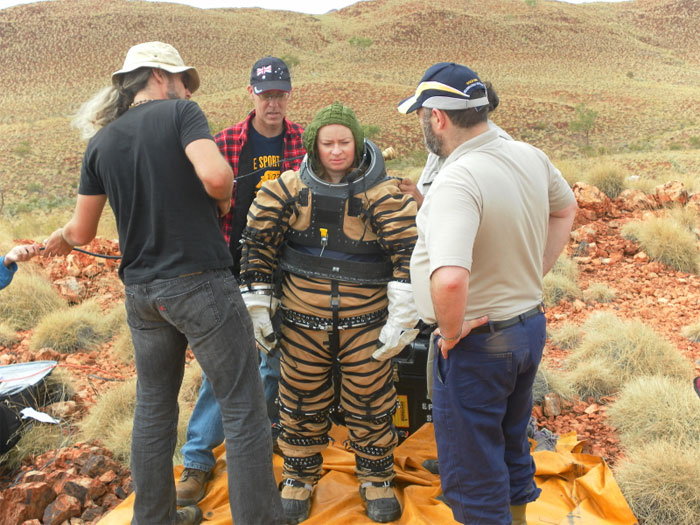 A study participant suits up in the NDX-1 spacesuit. Credit: Willson et al
.
All five human participants in the study were briefed on how to identify stromatolites. These fossils can appear as striated, pyramidal structures in rocks, with other characteristic features such as spines from a base to a pinnacle. Two participants were trained scientists with at least 15 years of field experience in either geology or environmental science; neither had previously explored the portion of the Dawn of Life Trail used in the study. Of the other three non-field scientist participants, two were science teachers and the third an undergraduate physics student. Willson and colleagues selected these two differing groups to compare the impact of field experience on stromatolite identification. Participants were allotted 15 minutes to survey the landscape and characterize as many fossils as possible.
When it was their turn to survey, participants donned an NDX-1 pressurizable spacesuit. Developed by the University of North Dakota, the NDX-1 is a demonstrator Mars suit. It has seen action in America's Badlands and Antarctica, among other places.
Finding fossils
After the suited-up exercise, participants were then directed to retrace their path, sans suit, to "ground truth" the surveyed areas. Ground-truthing in this case involved gathering all information available, providing a basis for comparison with space-suited surveying. This process took around 30 minutes.
Field science in this case was limited to visual identification, but proper, detailed surveying requires more effort and technique. Geologists and astrobiologists on Earth first photograph areas to record their natural, undisturbed state. The scientists will then proceed to investigate rocks of interest by breaking them open, inspecting with hand lenses and geochemical sensing instruments, for instance. The sense of touch to feel patterns and textures is also typically informative, and impossible while in a spacesuit. Dexterity to reach into crevices and move material around is also a staple of field work.
. 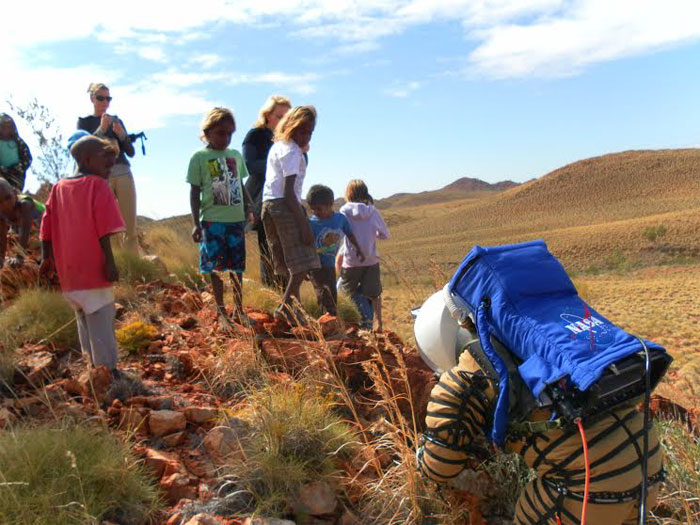 A study participant surveys for fossilized evidence of life in the Pilbara region of Australia. Children from the nearby town of Nullagine watch on. Credit: Willson et al
.
Willson and his fellows expected that field science performance, even of the basic variety done in the study, would suffer as a result of encasement in a spacesuit. The NDX-1 suit, in order to keep astronauts warm and sealed off from the surrounding environment, has many layers, bulky gloves and a large, round helmet. Doing activities inside of it is naturally quite different from moving about unencumbered as usual. As the researchers wrote in their paper: "Off-world scientist astronauts will be faced with spacesuit limitations in vision, human sense perception, mobility, dexterity, the spacesuit fit, time limitations, and the psychological fear of death from accidents, causing physical fatigue reducing field science performance." Sure enough, many of these issues were reported by the study participants.
In total, individuals in the study recorded 82 stromatolites when suited compared to 113 when ground-truthing—a difference of about 25 percent. Nine fossils were incorrectly identified while suited compared to three when surveying normally. Better training and spacesuit familiarity could make a dent in the gap between the two field science scenarios, Willson said, but perhaps not as much as one would think due to the limiting of human perceptions and senses while in-suit. Inevitably, work inside a spacesuit in a hostile alien environment will always be a tough proposition.
.
Balancing the crew
.
nterestingly, the experienced field scientists overall racked up fewer stromatolite findings than the untrained study participants, but were more thorough in their characterization. They focused on quality science findings. The non-field scientist group, for their part, spotted more stromatolites, but with less scientifically valuable detail—quantity over quality, essentially.
The takeaway from this result: A balance of science specialists and generalists working as a team could help future Mars missions get solid science returns while ensuring a wide skill set amongst the astronauts. A range of skills will naturally be important for managing the most complicated expedition ever undertaken. "I think it's productive to have very high-quality field scientists combined with people who are competent in that field but science field work is not necessarily their first-order task," said Willson.
The study paves the way for more research into how to optimize spacesuit design as well as astronaut training for the best possible yields from extraplanetary field work. "A lot of spacesuit development and field testing comes more from an approach of engineers trying things out in the suit," said Willson. "What we’re looking at is doing actual science in the field, such as finding fossils. We're having the scientist-astronauts do what they would normally attempt to do in their spacesuit."
. 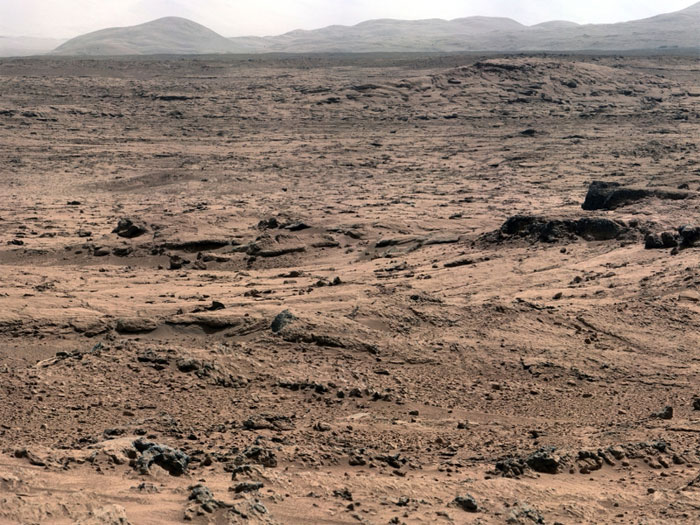 A panorama view of the "Rocknest" area on Mars visited by the NASA's Curiosity Rover in autumn 2012. Someday human explorers might comb Red Planet landscapes like this for evidence of life. Credit: NASA/JPL-Caltech/Malin Space Science Systems
.
Quelle: Astrobiology-Magazine