Recently, the reentry of the European Space Agency’s GOCE satellite caused some concerns that a few parts of the satellite could survive the harsh conditions of reentry and fall to Earth, endangering populations on the ground. In this case, the satellite burnt up over the Atlantic Ocean, but what happens when the surviving pieces of a spacecraft touch the ground?
In order to answer this question, Space Safety Magazine reached out to Dan Reichel, an actual space debris retriever. Reichel is currently Director, Business Intelligence and Export Control Officer for ManTech International Corp, Space & Advanced Technologies Business Unit, located in Cocoa Beach, Florida. He supports the US Space Command with in-depth range and launch technical expertise and assistance to the 45th Space Wing at Cape Canaveral Air Force Station and the Space & Missile Center Launch Range (SMC LR) programs at Los Angeles Air Force Base.
. 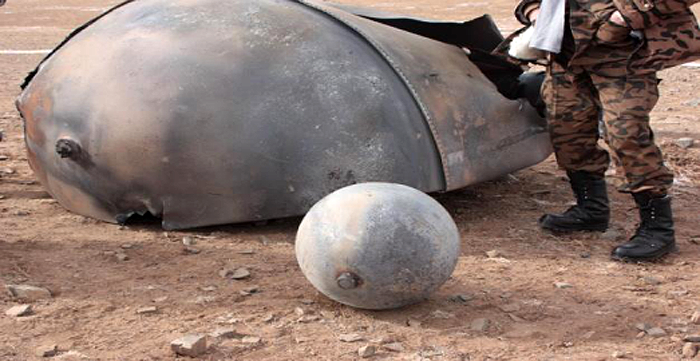 Delta II tank and sphere retrieved by Reichel and his team in Mongolia (Credits: Dan Reichel).
.
Part of his daily activities as a ManTech employee working for the SMC LR is to review Aerospace’s Center for Orbital and Re-entry Debris Studies (CORDS) and the Joint Functional Component Command for Space (JFCC-Space) Space-Track data for near-future de-orbiting debris.  Both of these organizations track orbiting debris from all countries and agencies. However, Reichel supports and reviews only those that are directly associated with US Department of Defense (DoD) launches.  Another of his tasks is to scan recent de-orbit tracks of US debris pieces and review newspapers and internet blogs of overflight countries to see if there are any reported sightings or actual findings of de-orbited rockets.
.
The Hidden Debris
.
“Sometimes we get lucky and find photos of found debris, and other times, as was a recent case with Uruguay, an individual was fishing at about 11:00 pm and managed to take a photo of re-entering debris,” said Reichel.  “We correlated the track, timing and location with a known de-orbiting Delta II 3rd stage rocket body via CORDS and Space-Track orbital data and were fairly sure we had a positive re-entry identification of the GPS IIR-10 (Navstar 53) debris launched from Cape Canaveral on December 21, 2003.”
Reichel kept an eye out for news of found debris or UFOs in local papers but, since nothing was reported, it was assumed the rocket stage over-flew Uruguay and landed in the Atlantic Ocean.
.

Photo of the Uruguay de-orbiting debris (Credits: Dan Reichel).
.
However, a few months later, Uruguay Air Force located the Delta II debris, held by a local farmer. The military notified NASA Johnson Space Center’s orbital debris office, who in-turn notified the USAF and SMC of the finding. Using the original rocket pedigree data and matching a partial serial number provided by the Uruguay Air Force, the debris was positively identified as a Payload Assist Motor (PAM) of a Delta II rocket stage.
“The farmer had kept the debris in his barn for a couple months, fearing the Government would come and take it away if he told the officials – which is exactly what they did when he told a few too many friends and they started sharing photos.”
. 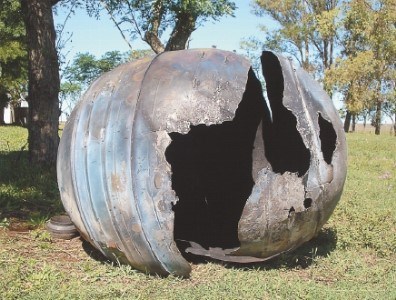 The PAM-D (Delta class Star-48B rocket motor) debris retrieved in Uruguay (Credits: Dan Reichel).
.
Debris Value
.
The vast majority of debris actually lands and sinks in the ocean leaving no traces or materials to be retrieved; therefore, it is very rare to find surviving de-orbited material. Generally, small objects will burn up during reentry, so those that survive tend to be the tanks, PAMs, and pressure spheres.
“I’ve been doing this for five years, but our data goes back much further, of course,” said Reichel.  “Based on what I’ve recovered, the most frequently surviving debris are the pressure spheres. Most surviving spheres are ½ to 1 meter in size and weigh approximately 15 to 30 Kilos. For instance, in Mongolia, we recovered a Delta stage II fuel tank and three pressure spheres. ”
The recovered debris generally has no actual value, other than scientific study, because none of the parts could ever be used again.  Aerospace Corporation maintains a database of all DoD-recovered material and studies the individual items for reentry heating, melting, and long-term space environment effects such as micro-meteor impacts.
. 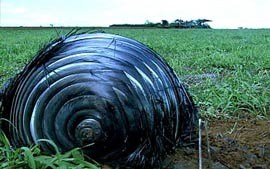 Atlas V COP-V space debris recovered in Brazil (Credits: Dan Reichel)
.
According to Reichel, since the debris trajectories change slightly from orbit to orbit, they fall throughout the world and there is not a “most visited” country. In the past five years, Reichel has visited Brazil, Uruguay, Mongolia, and Bermuda for this job and he is now preparing to visit a fifth country, since Delta I debris has been identified in Zimbabwe.
Naturally, when Reichel and his team need to leave for a retrieval mission, they receive assistance from the US Department of State (DoS) and the individual US Embassies in each country, assisting with logistics, translators, and meetings with local officials to discuss the debris and request its release. The main international agreement used by Reichel to get debris released from foreign authorities is the United Nations Treaty “1968 ARRA Agreement on the Rescue of Astronauts, the Return of Astronauts and the Return of Objects Launched into Outer Space” (Rescue Agreement). The Rescue Agreement provides that states shall, upon request, provide assistance to launching states in recovering space objects that return to Earth outside the territory of the launching state.“DoS and the US Embassy can, and has, assisted with in-place diplomatic protocols if the host country is not a signatory to the Rescue Agreement,” said Reichel. “I have not had any issues with release, and the host nation government agencies/personnel I’ve worked with have all been very interested and helpful in all recovery actions.”
. 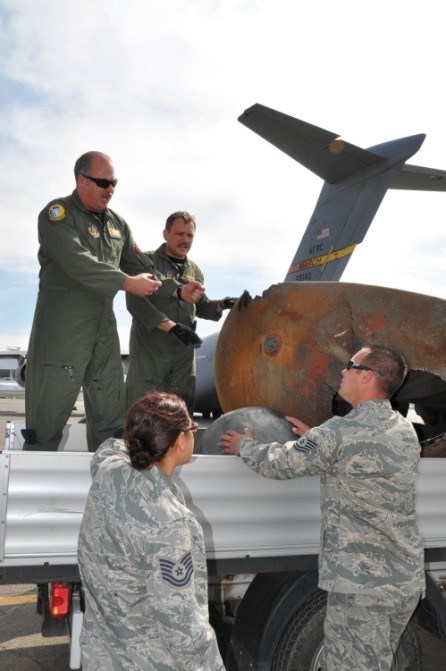 729th Airlift Squadron personnel from March Air Reserve Base, California, receive the Delta II Debris from US Embassy Mongolia, in Ulaanbaatar (Credits: Dan Reichel).
.
Found a Debris Object? Don’t Touch
.
On February 20, 2013, a titanium pressure sphere fell in Buna, Texas, and it was found by Dean Gentz, a regular citizen who made some investigations on his own before reaching out to NASA and the Aerospace Corporation. However, apparently, NASA did not show interest in Gentz’s finding, and his investigation pointed to the debris being from a Chinese CZ-4B rocket body.
Reichel explained that the best approach whenever a suspected space debris object is found is to immediately notify CORDS and NASA since they are easy to contact online and have a vast database of orbital debris.  They will also notify DoS, who will notify the UN of the found debris.  The objects retain the ownership of the launching state, so, even if a Chinese debris is found on US soil, there is a good chance that the Chinese will ask the UN and the US Government for its release back to them.
Debris are subjected to intense heating and melting during de-orbit, so, generally, they do not pose contaminant issues. However, depending on the debris, Reichel has to perform a HAZMAT routine to determine if any rocket fuels or oxidizers are present.
. 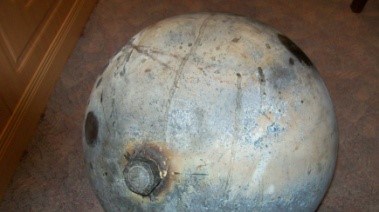 Delta II Sphere retrived in Mongolia (Credits: Dan Reichel).
.
“I am always amazed to see people holding and taking pictures with unknown objects, like space debris,” said Reichel. “It is not always obvious if the debris is hazardous or not. I know it’s difficult not to go over and touch a ‘possible UFO’, but, it is always safest to call the local authorities, explain what it is you have found, and ask them to come and determine if it is hazardous. ”
Space Safety Magazine would like to thank ManTech, SMC, and USAF Public Affairs for making this profile interview possible.
Quelle: Space Safety Magazine
« Zum vorherigen Eintrag Zum nächsten Eintrag »
5330 Views
Created with page4