This image, using data from NASA's Galileo mission, shows the first detection of clay-like minerals on the surface of Jupiter's moon Europa. The clay-like minerals appear in blue in the false-color patch of data from Galileo's Near-Infrared Mapping Spectrometer.
Image Credit: NASA/JPL-Caltech/SETI
.
A new analysis of data from NASA's Galileo mission has revealed clay-type minerals at the surface of Jupiter's icy moon Europa that appear to have been delivered by a spectacular collision with an asteroid or comet. This is the first time such minerals have been detected on Europa's surface. The types of space rocks that deliver such minerals typically also often carry organic materials.
"Organic materials, which are important building blocks for life, are often found in comets and primitive asteroids," said Jim Shirley, a research scientist at NASA's Jet Propulsion Laboratory, Pasadena, Calif. Shirley is giving a talk on this topic at the American Geophysical Union meeting in San Francisco on Friday, Dec. 13. "Finding the rocky residues of this comet crash on Europa's surface may open up a new chapter in the story of the search for life on Europa," he said.
Many scientists believe Europa is the best location in our solar system to find existing life. It has a subsurface ocean in contact with rock, an icy surface that mixes with the ocean below, salts on the surface that create an energy gradient, and a source of heat (the flexing that occurs as it gets stretched and squeezed by Jupiter's gravity). Those conditions were likely in place shortly after Europa first coalesced in our solar system.
Scientists have also long thought there must be organic materials at Europa, too, though they have yet to detect them directly. One theory is that organic material could have arrived by comet or asteroid impacts, and this new finding supports that idea.
Shirley and colleagues, funded by a NASA Outer Planets Research grant, were able to see the clay-type minerals called phyllosilicates in near-infrared images from Galileo taken in 1998. Those images are low resolution by today's standards, and Shirley’s group is applying a new technique for pulling a stronger signal for these materials out of the noisy picture. The phyllosilicates appear in a broken ring about 25 miles (40 kilometers) wide, which is about 75 miles (120 kilometers) away from the center of a 20-mile-diameter (30 kilometers) central crater site.
The leading explanation for this pattern is the splash back of material ejected when a comet or asteroid hits the surface at an angle of 45 degrees or more from the vertical direction. A shallow angle would allow some of the space rock's original material to fall back to the surface. A more head-on collision would likely have vaporized it or driven that space rock's materials below the surface. It is hard to see how phyllosilicates from Europa’s interior could make it to the surface, due to Europa’s icy crust, which scientists think may be up to 60 miles (100 kilometers) thick in some areas.
Therefore, the best explanation is that the materials came from an asteroid or comet. If the body was an asteroid, it was likely about 3,600 feet (1,100 meters) in diameter. If the body was a comet, it was likely about 5,600 feet (1,700 meters) in diameter. It would have been nearly the same size as the comet ISON before it passed around the sun a few weeks ago.
“Understanding Europa’s composition is key to deciphering its history and its potential habitability," said Bob Pappalardo of JPL, the pre-project scientist for a proposed mission to Europa. "It will take a future spacecraft mission to Europa to pin down the specifics of its chemistry and the implications for this moon hosting life.”
. 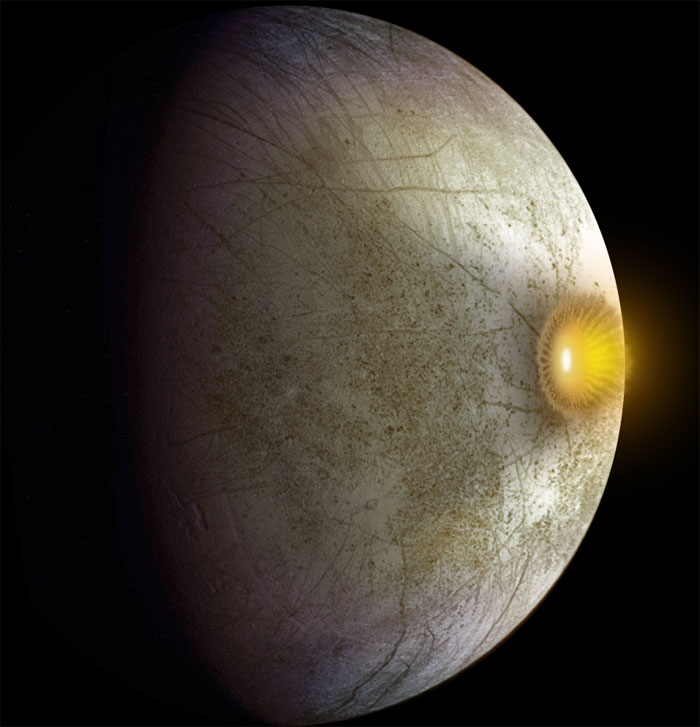 Hit Hard: Possible Collision at Europa (Artist's Concept)
This artist's concept shows a possible explosion resulting from a high-speed collision between a space rock and Jupiter's moon Europa. Clay-type minerals have been found on Europa's surface in a new analysis of data from NASA's Galileo mission. The pattern of these minerals suggests an asteroid about 3,600 feet (1,100 meters) across or a comet about 5,600 feet (1,700 meters) across could have hit at a shallow angle. Clay-type minerals are commonly found in primitive asteroids and some comets. These kinds of asteroids and comets also typically carry organic compounds, providing a possible way for organics to be delivered to Europa.
Image credit: NASA/JPL-Caltech
.
Quelle: NASA
« Zum vorherigen Eintrag Zum nächsten Eintrag »
4020 Views
Created with page4