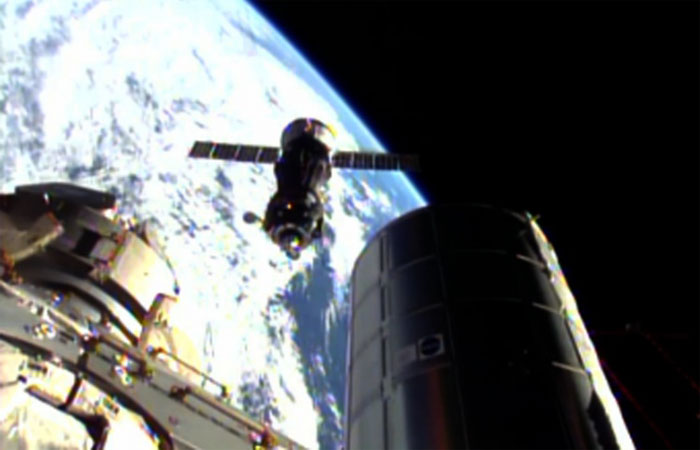 The Station's forthcoming docking of Russian resupply spacecraft Progress M-22M is scheduled for February 5, 2014
.
Russia's space flight control center (FCC) will adjust the orbit of the International Space Station (ISS) on Friday in order to ensure the Station's forthcoming docking of Russian resupply spacecraft Progress M-22M, the launch of which is slated for February 5, 2014, an FCC official told Itar-Tass.
"The engines of the cargo spacecraft Progress M-21M will be resorted to raise the ISS orbit. An ignition of the engines is scheduled for 18:57, Moscow time, on Friday, the FCC official said.
Within the 599-second operation of the propulsion plant, the ISS, upon getting an additional impulse of 1.3 m/sec, will rise by about 2 km. Thereby, the Station's average orbit altitude will be approximately 417 km.
ISS orbit adjustment maneuvers are usually carried out in order to bring the Station to a needed orbit for docking with a resupply spacecraft or a manned spaceship, and to create conditions for successful landings, as well as for evasion of space debris.
Every day, under the impact of terrestrial gravitational pull and other factors, the altitude of the ISS orbit lowers by 150-200 meters.
Quelle: Roscosmos
Progress M-22M 2014
« Zum vorherigen Eintrag Zum nächsten Eintrag »
4157 Views
Created with page4