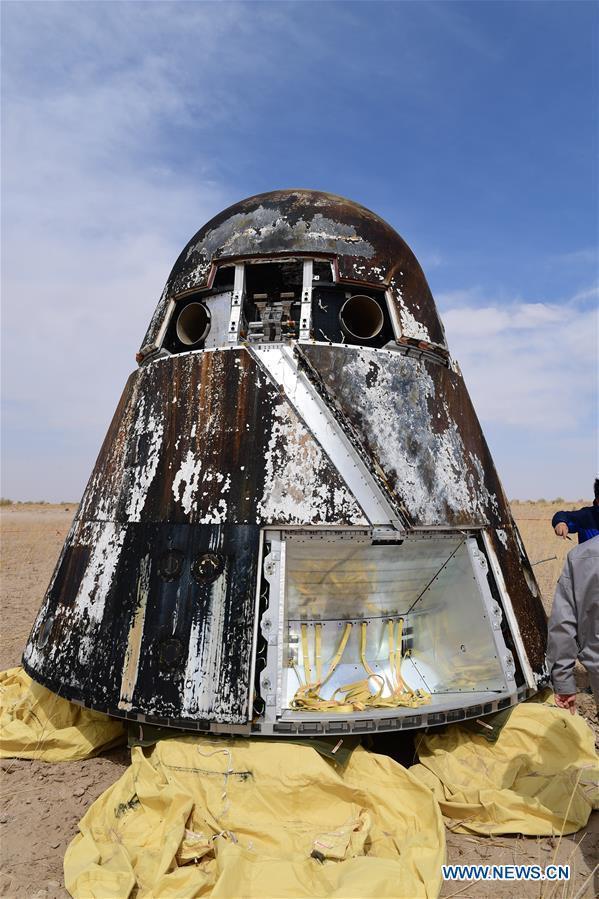 A "space 3D printer" developed independently by China and two samples it printed in orbit successfully returned to Earth Friday, according to the China Academy of Space Technology (CAST).

They came back in the return capsule of China's new-generation manned spaceship for testing, which was launched from the Wenchang Space Launch Center in southern China's island province of Hainan on Tuesday and touched down at the Dongfeng landing site in northern China's Inner Mongolia Autonomous Region on Friday.

It is China's first in-orbit 3D printing test, which has realized space 3D printing of continuous carbon fiber reinforced polymer composites for the first time in the world.

Developed by a research institute of the CAST, the 3D printing system completed the scheduled tasks in orbit at 1:58 a.m. on Thursday. The images transmitted by the experimental spaceship showed that the two samples were printed successfully and could be distinguished clearly.

Researchers will further check the performance of the returned printer and printed samples and give a comprehensive evaluation.

Carbon fiber has been widely applied in aerospace as a lightweight and high-strength material. Continuous carbon fiber is of great significance in improving the performance of composite materials.

The two samples in the test are both printed out of continuous carbon fiber filament materials, which will lay an important technical foundation for the application of 3D printing of composite materials in the future.

The printing system has also realized the automatic control of the whole process, according to the CAST.

The previous 3D printing experiments in microgravity all involved people, who could intervene when errors occurred in either activating, heating up the equipment or printing. This time, the system has completed all the scheduled tasks unattended, providing an important technical reference for the follow-up space 3D printing tasks in its structure, motion control, lighting and camera monitoring, the CAST said.

The system has also been tested more comprehensively than previous ones, as the new spaceship could provide a relatively longer microgravity environment after entering orbit.

This test can not only examine the material forming process, but also test the reliability, movement accuracy and material quality of the printing system, the CAST said.

The returned samples can directly show the influence of microgravity on materials, structural mechanism, movement control and shape forming, with the experience more suitable to be applied in extra-vehicular activities and in-orbit construction of large structures, it said.

The experimental spaceship also carried a CubeSat deployer based on the metal 3D printing technology.

A deployer connects a CubeSat, a type of miniaturized satellite, and its transport vehicle. Whether a deployer can reduce vibration in launching, release a CubeSat and transmit the separation signal accurately is the key to a successful CubeSat launch.

"The 3D printed deployer is half the weight of a traditionally manufactured one, and the production cycle is shortened from the past few months to one week. The 3D printing technology will have a more and more attractive prospect in aerospace applications," said Bai Ruixue, COO of CoSats. Enditem