Comet SWAN is expected to grace northern skies in the days to come. 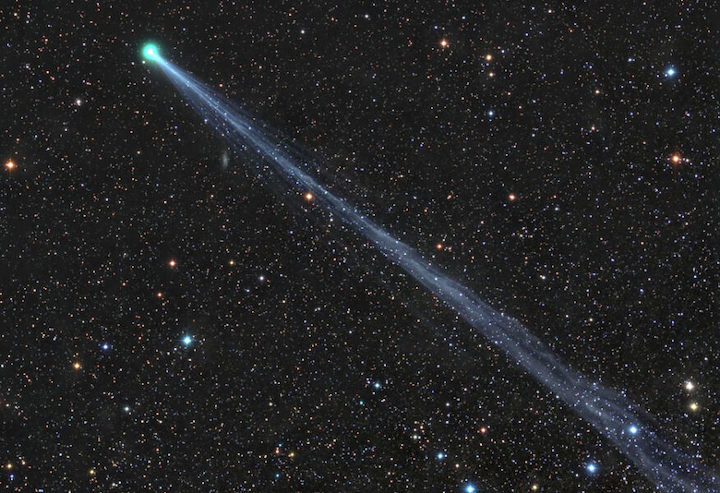 When Comet ATLAS (C/2019 Y4) began to fragment and fade in April our hopes for a bright comet this spring appeared quashed. But just in the nick of time Comet SWAN (C/2020 F8) came to the rescue, shooting across the sky faster than a speeding bullet and wearing a magnificent green cape to boot! Discovered in images taken by the Solar and Heliospheric Observatory's SWAN (Solar Wind Anisotropies) camera on March 25th by Australian amateur Michael Mattiazzo the comet has brightened by leaps and bounds. As of May 5th, the newcomer had climbed to magnitude 5.2 with a 1° visual tail that lengthens to a luxurious 6–8° in photographs.

While ATLAS continues to hang on at magnitude 9, photos taken by both amateurs and the Hubble Space Telescope clearly show a nucleus in turmoil, shattered into dozens if not hundreds of pieces. Why is uncertain, but according to a recent Hubble press release the original nucleus may have spun itself into pieces because of uneven outgassing from sublimating ices. Picture the comet as a punching bag for the jets of gas and dust blasting willy-nilly from its nooks and crannies. While the future of ATLAS is dim (pun intended), both amateurs and professionals are finding its unraveling a rare glimpse into the nature of comets as fragile agglomerations of crystal and dust.

Southern Hemisphere observers have the best seats for viewing the comet in early May but that will change as SWAN moves rapidly northward. This week, observers in the southern U.S. should get their first glimpse of the comet very low in the eastern sky during morning twilight as it speeds from Cetus into Pisces. The comet's height above the eastern horizon will vary depending on latitude, with more northerly latitudes favored from about May 20th through early June. Peak magnitude of 2.8 is expected around May 21st.

While northern viewers will get a modest altitude bump, twilight also begins earlier — 2 to 2½ hours before sunrise compared to 1 ½ hours for the southern U.S. — so any elevation gains may well be offset by skyglow.

If the 3rd-magnitude comet were visible in a dark sky even suburban observers would snag it. But because SWAN never gets far from the Sun during the best part of its apparition and constantly flirts with twilight I strongly suggest using a pair of binoculars. Once you've found it lower the glass and see if you can spot the comet without optical aid.

On May 12th the comet will breeze some 83 million kilometers (52 million miles) from Earth and come to perihelion on May 27th at a distance of 64 million kilometers (40 million miles) from the Sun. During the second week of May SWAN will stand just a few degrees high in the eastern sky 90 minutes to 2 hours before sunrise for the central U.S. By May 21st its altitude increases to around 5° and subsequently declines at month's end.

The comet also has an evening sky apparition that overlaps with its morning appearance. From about May 23rd to June 10th observers at mid-northern latitudes can catch the comet in a dark sky at the end of evening twilight as it glides from eastern Perseus into Auriga. On the 23rd it will only stand about 3° high at dusk's end but that increases to 7° by the 28th. The northern U.S. will have a slightly longer period of visibility. Although SWAN fades from magnitude 2.8 to 5 during this time it's visible during convenient evening hours and with less twilight interference.

If you're out at dawn find a location with a view as close to the east-northeastern horizon as possible. Evening observers will need to secure a spot with a horizon to the north-northwest. When seeking a location for viewing a special celestial treat like a comet I'll explore both Google Maps (click on the Satellite View box for a photographic map) and the Light Pollution Map to find a convenient dirt road or field open in the key direction.

The altitudes above refer to the head of the comet but it's likely that SWAN will develop a long, bright tail pointing up and away from the Sun. What a beautiful sight that would make in binoculars! Not to mention a tempting target for wide-field astrophotography. Comet SWAN makes several close passes of deep-sky objects and bright stars during its run, including a near miss of the 10th-magnitude galaxy NGC 925 in Triangulum (May 17th). It comes within 0.5° of Algol on the 20th and then sails 1° south of Capella on June 2nd.

I think this comet is something to get excited about. If it can keep it together we're in for a wonderful show. And all before the mosquitos come out in full force. Who could ask for more?

Although COVID-19 concerns mean we have to keep our distance from one another I would encourage you to share the comet in small groups in safe fashion. Each person (or family) who wants to attend your viewing session would drive their own car to the observing location and watch with their own pair of binoculars or telescope. Once everyone's out of their vehicle — and keeping at least the requisite 6 feet apart — you can explain where to look and then enjoy the sight together within earshot of one another in this unique form of "remote observing."

Yet another recent comet discovery has bright prospects. Comet NEOWISE (C/2020 F3) was found in March by NASA's NEOWISE project, the asteroid-hunting division of the Wide-field Infrared Survey Explorer (WISE) mission. It currently glows at magnitude 11 with a strongly condensed coma 5′ across. The new object is scooting north from Lepus into Orion and only visible in the Southern Hemisphere for the moment. It will disappear in the solar glare in early June and then return to the dawn sky in Auriga for Northern Hemisphere observers in July. Although the comet will remain low in morning twilight, it's expected to reach magnitude 3 or 3.5 by mid-July as it works its way from Lynx to Ursa Major.