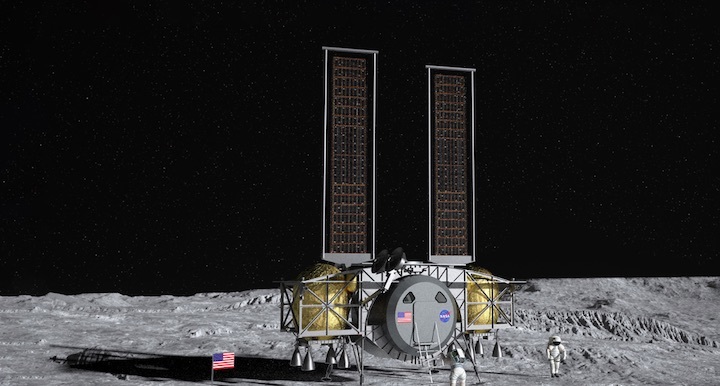 HUNTSVILLE, Ala. - Dynetics, a wholly owned subsidiary of Leidos (NYSE: LDOS), has been awarded a contract under NASA's Artemis program to design a Human Landing System (HLS) and compete to build a system to take the first woman and next man to the lunar surface by 2024.

Dynetics is one of three prime contractors selected.

The Dynetics approach enables near-term reusability and sustainability and provides a robust, commercially supported lander capability, while boasting flight-proven technologies for habitat, power, thermal and other subsystems. The system's crew module is designed to accommodate two crew members for nominal missions from lunar orbit to the lunar surface and back, including surface habitation for about a week. Alternatively, it can ferry up to four suited crew members to or from the lunar surface.

"There's really no more exciting mission than delivering humans to other planetary bodies," said Kim Doering, Dynetics vice president of Space Systems. "However, it's also among the most challenging endeavors, particularly given the goal of landing on the moon in 2024. We believe Dynetics has the recipe for success."

"As a new member of the Leidos family, Dynetics continues to lead the industry with talented innovators eager to solve today's complex problems," said Leidos Chairman and CEO Roger Krone. "NASA's HLS is truly innovative and one that will revolutionize space travel. We are fully committed to this endeavor and proud to join the team returning Americans to the moon."

The Dynetics HLS can be fully integrated and launched on the Space Launch System (SLS) Block 1B vehicle. For commercial launches, it can be flown aboard United Launch Alliance's Vulcan Centaur rocket.

With Dynetics as the prime contractor and system integrator, the team is composed of a broad and diverse set of small and mid-size businesses, as well as NASA field centers with industry-recognized technical expertise and programmatic experience. The Dynetics-led team is located in 17 U.S. states and one international country. Major components and subsystems will be built, tested and integrated at a Dynetics facility in northern Alabama.

The experienced team of partners and subcontractors include:

Dynetics, a wholly owned subsidiary of Leidos, provides responsive, cost-effective engineering, scientific, IT solutions to the national security, cybersecurity, space, and critical infrastructure sectors. Our portfolio features highly specialized technical services and a range of software and hardware products, including components, subsystems, and complex end-to-end systems. The company of more than 2,500 employees is based in Huntsville, Ala., and has offices throughout the U.S. For more information, visit www.dynetics.com.