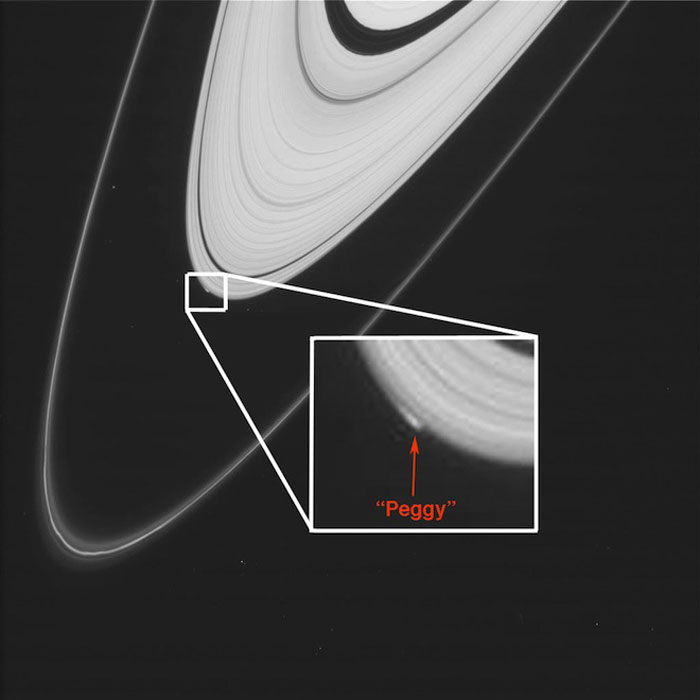 NASA’s Cassini spacecraft has spotted an object located right at the edge of Saturn’s A ring that is confounding scientists. Its name? Peggy.
This strange something was spotted by accident on April 15 when Cassini’s cameras were aimed at a tiny moon named Prometheus that orbits just inside another of Saturn’s rings. A member of the mission’s imaging team, astronomer Carl Murray of Queen Mary University of London, noticed an odd kink at the A ring’s edge that jutted outward.
“I’d not seen anything like this personally in the A ring,” he said during a talk today here at the 2013 American Geophysical Union conference.
Because he was analyzing the images on April 19, the same day as his mother-in-law’s 80th birthday, Murray named the mystery object after her. Peggy (the object) appears to be about 1 kilometer in diameter, much too small to be a moon or even moonlet, which are generally at least 10 times bigger. Cassini’s cameras can only see down to about 10 km, so Peggy is only known by the interference it causes.
“What he sees is a disturbance in the rings,” said physicist Matthew Headman from the University of Idaho, also a member of Cassini’s imaging team but who was not involved in Murray’s work.
Nobody knows exactly what Peggy is. One possibility is that it’s an accumulation of ring material that has collapsed gravitationally under its own weight. Some of Saturn’s moons, particularly those orbiting near the rings, are thought to have formed in this way, forming from ring dust and then collecting more material to grow. If this is what Peggy turns out to be, it would be quite exciting for scientists, who have never observed this process before.
The mystery object could also just be a transient feature, perhaps a bunch of material that came together briefly but then broke back up into smaller chunks in the ring. After going back in Cassini’s image archive, Murray found pictures of Peggy from as early as June 2012. But it is inconclusive whether or not Cassini has seen the feature in shots taken after April.
“It may well be that the discovery image was the breakup of the object,” Murray said.
The Cassini team has scheduled further investigations of Peggy, which may help clear up some of the confusion. They are particularly interested to see what happens to it after January, when gravitational interactions from two moons named Janus and Epimetheus will cause the A ring to expand somewhat, its edge sweeping outward away from Saturn.
“Is it going to ride the edge out? Or will the edge sweep past it?” asked Headman. The answer will have to wait.
Quelle: WIRED
Cassini Saturn-Objekt Peggy
« Zum vorherigen Eintrag Zum nächsten Eintrag »
3767 Views
Created with page4