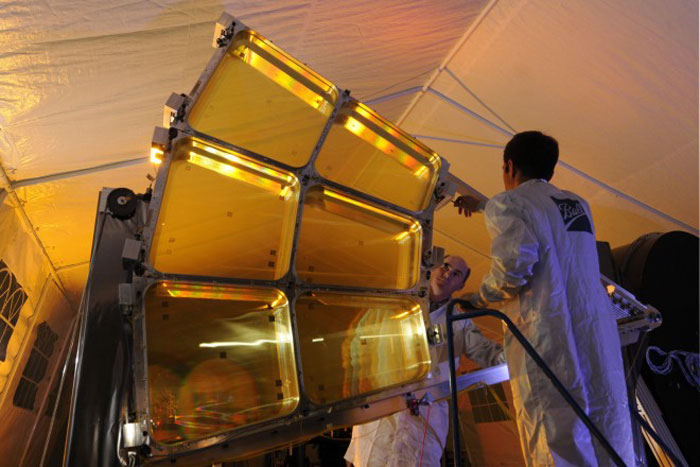 Spying could become much easier if a new lightweight, folding satellite concept gets off the ground.
Darpa, the military’s futuristic research agency, says it has plans to “break the glass ceiling” of space telescopes by shooting a new design into orbit that’s made of plastic and unfolds into a mammoth satellite that would dwarf the world’s most famous telescopes.
Darpa’s Membrane Optical Imager for Real-Time Exploitation (MOIRE) program redesigns the traditional glass telescope into an orbital telescope that’s bigger and lighter than previous imaging satellites, making it easier to spy on larger areas and for longer periods of time.
Launched as a tightly packed cluster of petals 20 feet in diameter, MOIRE stretches to 68 feet across once it reaches 22,000 miles above the earth. From orbit, MOIRE could view approximately 40 percent of the earth’s surface at once while recording high resolution images and video, making it the ultimate spying satellite (Darpa notes that it could also be beneficial in weather forecasting and disaster response).
Up to this point, high resolution imagery has required large-diameter mirrors, but the thick, heavy glass is difficult to make and expensive. According to Darpa, to keep up, the glass mirrors are rapidly approaching the point where they will be too large, heavy and costly for even the largest of today’s rockets.
“Membrane optics could enable us to fit much larger, higher-resolution telescopes in smaller and lighter packages,” said Lt. Col. Larry Gunn, Darpa program manager, in a statement. “In that respect, we’re ‘breaking the glass ceiling’ that traditional materials impose on optics design.”
Instead of reflecting light with mirrors or refracting it with lenses as traditional space telescopes do, MOIRE’s membrane — roughly the thickness of kitchen plastic wrap — optics diffract light.
And because MOIRE is so much lighter and smaller at launch, Darpa thinks the program will be budget-wise and more efficient.
“We’re hoping our research could also help greatly reduce overall costs and enable more timely deployment using smaller, less expensive launch vehicles,” said Gunn.
Darpa says the MOIRE program is in its second and final phase and recently demonstrated a ground-based prototype that implemented several critical aspects of the project.
The sizes of the Spitzer, Hubble, Webb and Keck telescopes show there’s no comparison to what the MOIRE telescope could cover:
. 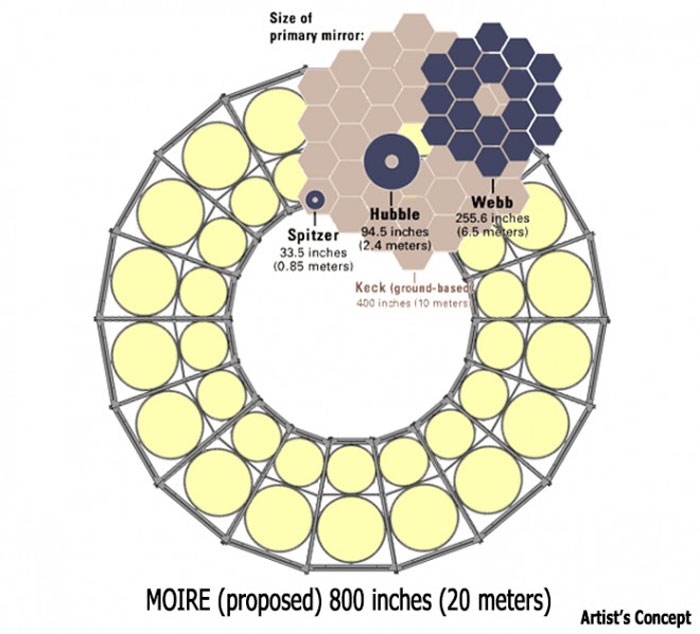