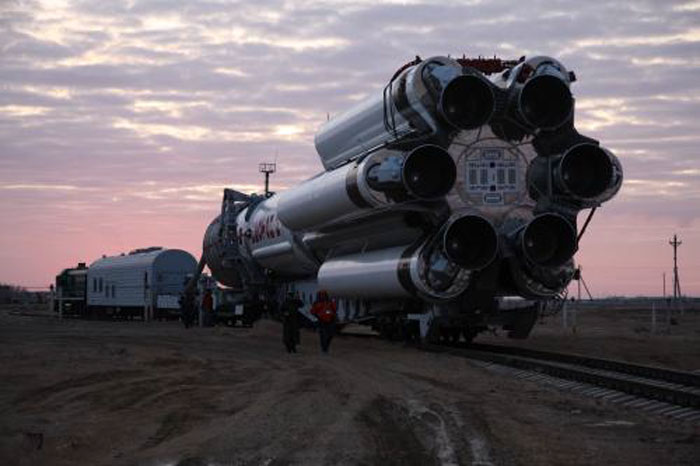 Proton-M Rolls Out to Baikonur Pad Ahead of Sunday Launch 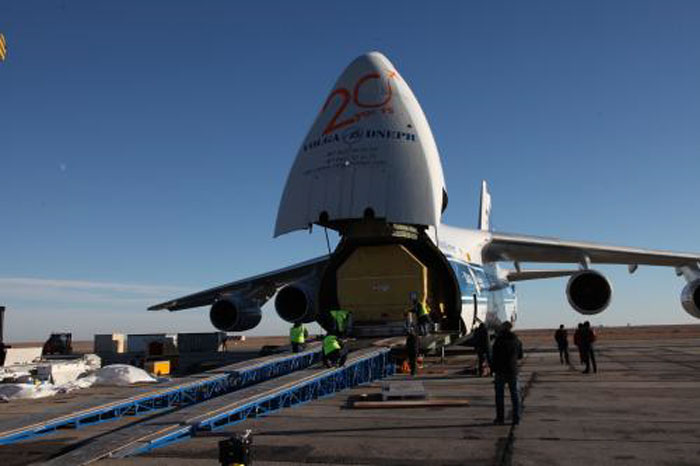 Encased within its protective container, the Inmarsat 5-F1 payload is removed from the Antonov-124 carrier aircraft on 12 November. Photo Credit: ILS
Quelle: AS
.
Update: 23.10 MEZ
. 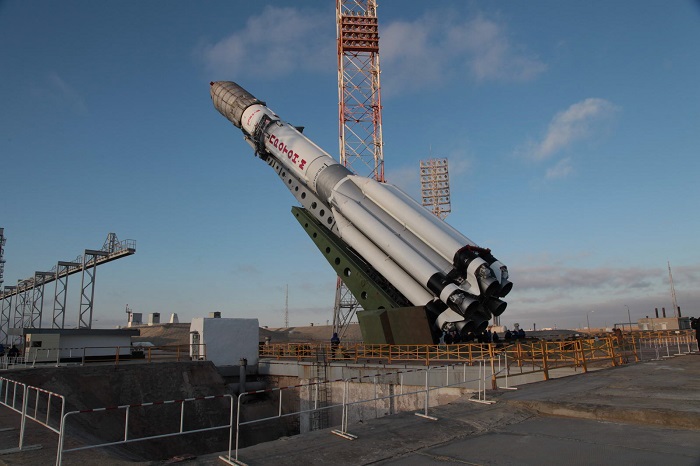 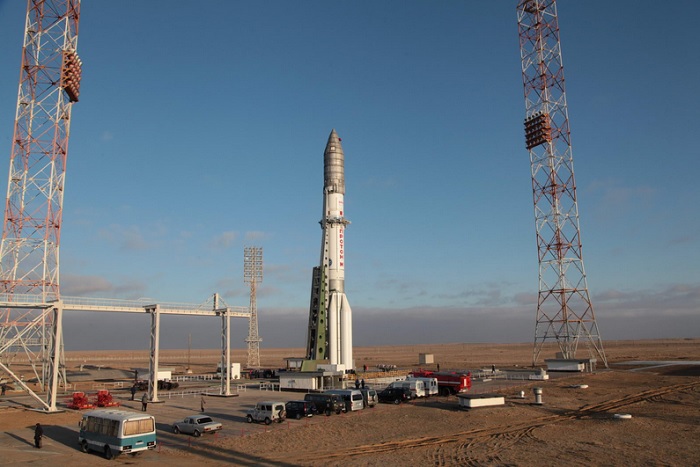 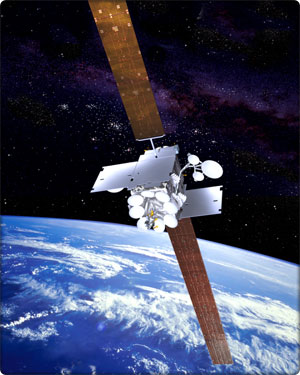 General Characteristics:
The new satellites will join Inmarsat's fleet of 10 geostationary satellites that provide a wide range of voice and data services through an established global network of distributors and service providers.

Each Inmarsat-5 satellite will carry 89 Ka-band beams that will operate in geosynchronous orbit with flexible global coverage. The satellites are designed to generate approximately 15 kilowatts of power at the start of service and approximately 13.8 kilowatts at the end of their 15-year design life. To generate such high power, each spacecraft's two solar wings employ five panels each of ultra triple-junction gallium arsenide solar cells. The Boeing 702HP carries the xenon ion propulsion system (XIPS) for all on-orbit maneuvering. When operational, the Inmarsat-5 satellites will provide Inmarsat with a comprehensive range of global mobile satellite services, including mobile broadband communications for deep-sea vessels, in-flight connectivity for airline passengers and streaming high-resolution video, voice and data.

In a separate arrangement, Boeing also entered into a distribution partnership with Inmarsat to provide L- and Ka-band capacity services to key users within the U.S. government. Leveraging Boeing's expertise in government environments and applications, the Inmarsat-5 satellites will provide Inmarsat's customers with an array of secure voice and high-speed communications applications between land, sea and air services, and multinational coalition. The Inmarsat-5 spacecraft will be compatible with the Ariane, Sea Launch, Proton and Atlas launch vehicles.

Miscellaneous:
Beginning in 1976, Boeing has built three satellites and four payloads for Inmarsat. Marisat 1, 2 and 3 were three L- and C-band communications satellites built for the space segment of the world's first maritime system. Of the three Marisat satellites, all exceeded their contractual design life of five years and provided a combined 70 years of service. The HS-356 spacecraft were launched in 1976, one each on February 19, June 9, and October 14. The satellites were placed in geosynchronous orbit at 15 degrees west longitude, 176.5 degrees east longitude, and 72.5 degrees east longitude, respectively. Boeing also built the L-band payloads that launched on the four Inmarsat-2 satellites during the early 1990s and continue to operate without a single unit failure to date. 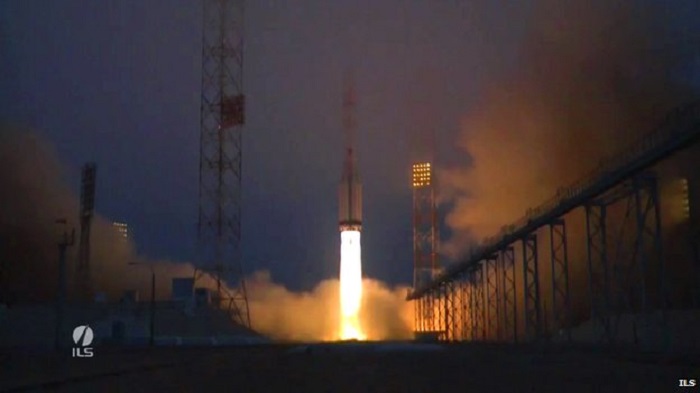 The London-based Inmarsat company has launched the first spacecraft in what will be a new global telecommunications network for its on-the-move customers.

Inmarsat plans to launch up to three further spacecraft in its Ka-band Global Xpress (GX) system, representing an investment of £1bn ($1.6bn).

The initial I-5 F1 satellite was launched from Baikonur in Kazakhstan.

Separation from the Proton's Breeze-M upper-stage on Monday (GMT) should put the I-5 in a supersynchronous transfer orbit that runs out to 65,000km above the planet.

The Boeing-built, 6.1-tonne satellite will then use its own electric propulsion system to circularise this trajectory and move itself into a "stationary" position at 63 degrees East, some 36,000km above the Indian Ocean.

Its principal customer base is the shipping sector, but the company also caters for any groups that need connectivity away from a fixed line. These include oil and gas installations, the aviation sector, armed forces, aid agencies and NGOs in disaster areas, and TV news crews reporting from trouble zones.

Customers can use Inmarsat services to make phone calls, to transfer audio-visual material or simple data.

Traditionally, the company has served these customers using the L-band part of the radio spectrum. However, the new GX constellation will operate in the higher-frequency Ka-band, enabling much higher bandwidth connections - up to 50Mbps download, and 5Mbps upload.

"When we started thinking about this project five years ago, we'd come to the conclusion that you could not grow much further the L-band franchise - not in terms of revenue, but in terms of capacity," explained Ruy Pinto, Inmarsat's chief technical officer.

"We have hit the limits of all-you-can-eat high-data-rate packages in L-band; there simply isn't enough spectrum. Ka is the natural next step to deliver the types of packages our customers want," he told BBC News.

The I-5 satellites will not replace the existing Inmarsat L-band spacecraft; rather, they will augment them, and hopefully also drive new types of services.

Although Ka will accommodate higher data rates, its signals can become degraded in poor weather, and Inmarsat plans to switch customers seamlessly between the bands if some locations on the globe are experiencing particular difficulties.

"The physics of Ka allows higher throughput. It has had a vulnerability in the past because of its susceptibility to 'rain fade', to bad weather, but technology has largely taken care of this problem," added Inmarsat's Michele Franci.

"And for the maritime sector, where you might experience extreme weather, we offer a service onboard the ship where you have a router that is connected to the network management system and chooses Ka or L-band depending on the strength of the signal."

One key and fast-growing market likely to benefit from the introduction of the Global Xpress system is the aviation sector.

Inmarsat already provides mobile connectivity to enable airlines to offer on-board wifi for passengers. Ka should mean those passengers can do more on their laptops, tablets and smartphones while in the air.

Of all Inmarsat's revenue streams, this one is currently growing fastest - in double digits.

Three satellites, separated from each other by roughly 120 degrees, are required to complete the GX network. Inmarsat will launch the I-5 F2 and F3 models next year, with the aim of having 90% of services up and running by the end of 2014.

The company has also exercised an option to buy a fourth spacecraft from Boeing.

This additional platform will initially provide insurance against any failure in the first three, be that a loss on launch or a major malfunction in orbit. But the intention is certainly to put it in orbit at some point.

Richard Roithner from the space consultancy Euroconsult said the GX roll-out was a big moment for Inmarsat.

He told the BBC: "With this trend towards the higher data-rate needs of customers, Inmarsat has increasingly faced competition from Fixed Satellite Service operators, such as Intelsat and SES with what is called VSAT in the Ku and C-band. This has taken away some high-end customers.

"These operators are all now thinking about their next-generation, high-throughput systems. And in the future, Intelsat will probably be the main competition with a system called Epic," he said. 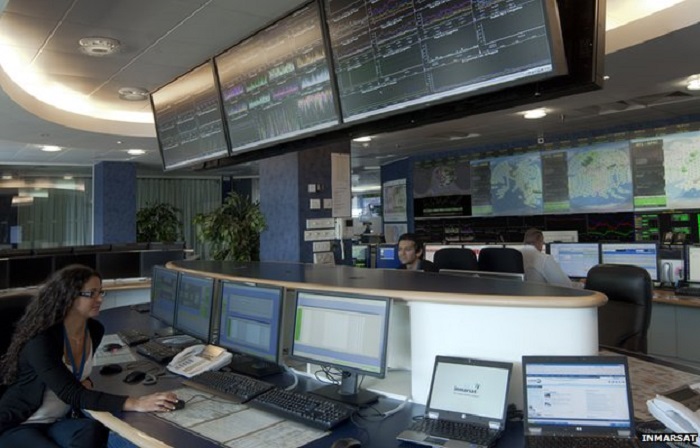 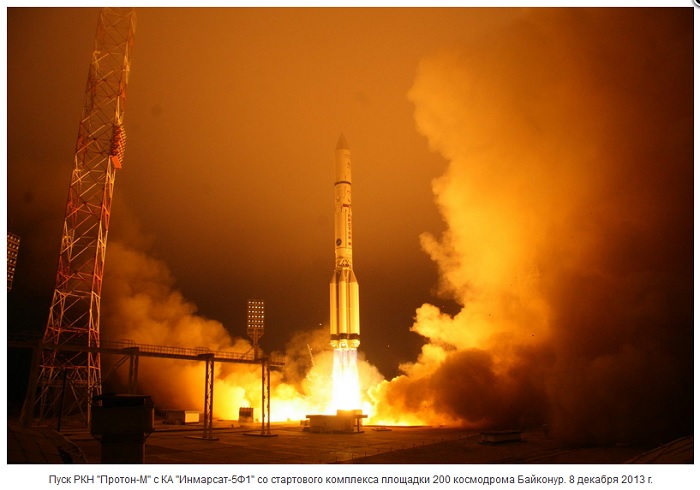 A Russian Proton-M rocket and a Breeze-M upper stage have successfully guided a fresh telecoms satellite into sub-orbit on Sunday. "The spacecraft and the upper-stage rocket have detached from the third stage of the carrier rocket," Russia's space agency has reported.

After being launched from Baikonur in Kazakhstan at 12:12 GMT by a Russian Proton-M main booster, the Inmarsat-5F1 telecommunications satellite of the British Inmarsat global mobile operator is on its way to a geostationary transfer orbit up to 65,000 km above the earth. It is expected to settle into this orbit on Monday morning after detaching from the Briz-M upper booster at 3:43 UTC. The Briz booster is yet to be fired five times to psoition the satellite.

The Khrunichev company that developed the Proton and Briz systems says the detached booster will immediately be deactivated to prepare it for safe dead orbiting.

From its transfer orbit, the Inmarsat-5F1 satellite is to proceed to a geostationary position

A rocket Proton-M with the British telecommunications satellite Inmarsat-5F1 will be launched from the Russian spaceport Baikonur on Sunday, the press service of the Khrunichev State Space Research-and-Production Centre said.

"The launch of the telecommunications satellite Inmarsat-5F1 is scheduled at 16:12 Moscow time on Sunday, December 8, from the Baikonur spaceport," the press service reported.

The telecommunications satellite Inmarsat-5F1 will be launched according to the already tested method of orbiting the satellite.

The first three stages of the rocket Proton-M will put the upper stage rocket Briz-M onto a suborbital trajectory carrying the telecommunications satellite Inmarsat-5F1. The upper stage will then bring the satellite to the designated orbit. After that the telecommunications satellite Inmarsat-5F1 will shift to its geostationary orbit by means of its engine and will assume it's position at 63 degrees east longitude.

The British telecommunications satellite will separate from the upper stage rocket 15.5 hours after the launch.

The Inmarsat-5F1 satellite was produced by the U.S. company Boeing Satellite Systems based on the BSS-702HP platform for the British satellite communications operator Inmarsat Plc. The launch weight of the satellite will be more than six tonnes. 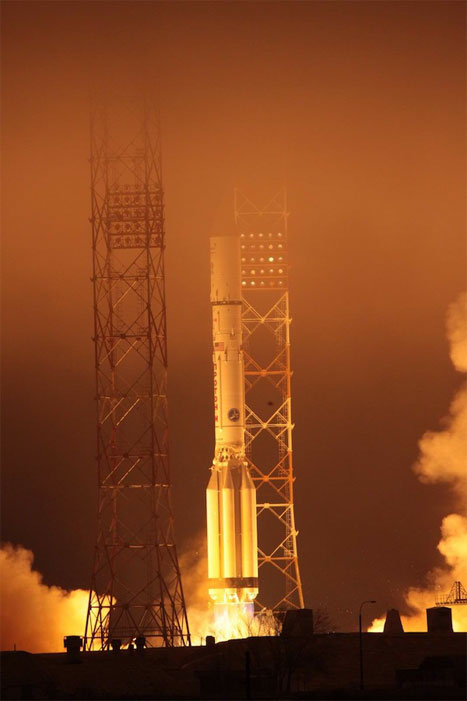