No one yet knows where the massive booster will come down after launching a new space station module Sunday (July 24). 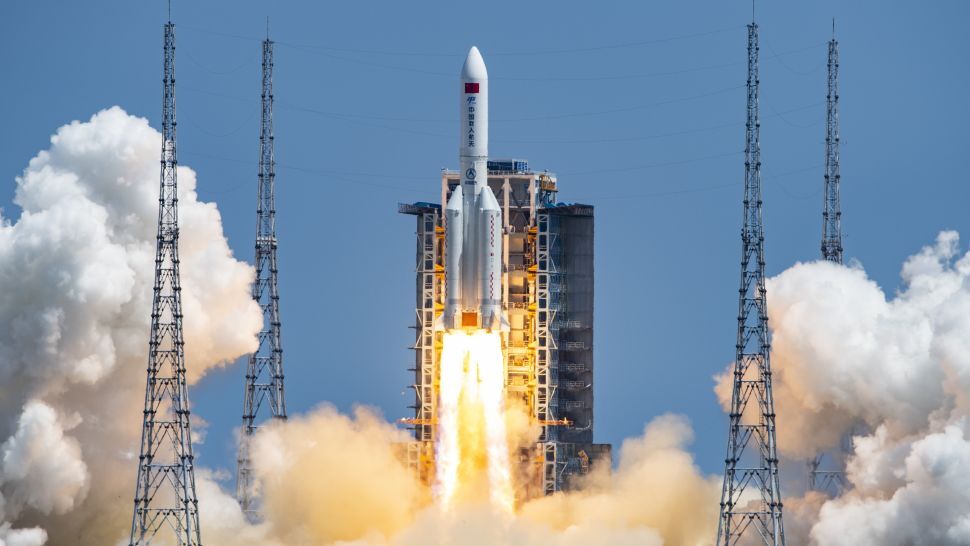 China has once again opted to let a huge rocket stage fall back to Earth on its own.

The decision, the third time the country has opted not to control the disposal of the first stage of the Long March 5B rocket, once again puts China under scrutiny from space debris trackers after similar uncontrolled falls in 2020 and 2021.

Jonathan McDowell, an experienced tracker of these events at the Harvard-Smithsonian Center for Astrophysics, said U.S. Space Command orbital data is showing the 21-ton stage floating on its own.

"The inert ... core stage remains in orbit and was not actively deorbited," McDowell wrote(opens in new tab) on Twitter. McDowell added(opens in new tab) that relative to U.S. launch providers, Americans "do a rather better job of upper stage disposal, and China on average a worse one."

The U.S. military has not yet issued alerts on Twitter, either through Space Command or the 18th Space Defense Squadron that tracks re-entries. Nor has Aerospace Corporation, which typically provides information on large human-made re-entering vehicles, discussed the matter on social media.

Generally speaking, the risk of casualties from falling rocket stages are infinitesimally low, but the Long March 5B rocket body is particularly large.

A recent study in Nature Astronomy points out that the practice of letting huge stages make uncontrolled falls to Earth creates "unnecessary risk," and that China is not alone in the practice despite international guidelines for falling space debris mitigation.

The United States and most of the major international space agencies have practices governing how to deal with the risk of rocket stages. The American government, for example, governs its falls under Orbital Debris Mitigation Standard Practices(opens in new tab).

The practices require that risk of casualties from a re-entering rocket are below a 1-in-10,000 threshold, but the article notes this is not followed every time. The U.S. Air Force waived the requirements for 37 of its 66 launches between 2011 and 2018, "on the basis that it would be too expensive to replace non-compliant rockets with compliant ones," the article stated.

NASA waived these casualty requirements seven times between 2008 and 2018, including an Atlas V launch in 2015 of the Magnetospheric Multiscale Mission that carried a casualty risk of 1 in just 600, the article added. The authors said it's important to remember this as both the Biden administration and NASA have condemned China's practices in past years.

"There is no international consensus on the acceptable level of risk, and other spacefaring states — including the USA — make similar choices concerning uncontrolled reentries," the authors wrote. The paper was led by Canadian political scientist Michael Byers, of the University of British Columbia.

Since most uncontrolled rocket bodies launch near the equator, it's cities in the Global South that appear to bear disproportionate risk. The authors say that latitudes including Jakarta (Indonesia), Dhaka (Bangladesh), Mexico City, Bogotá (Columbia) and Lagos (Nigeria) have three times the risk of a re-entering rocket body than Washington, D.C., New York, Beijing and Moscow.

The authors add that national governments with populations "at disproportionate risk by uncontrolled rocket bodies" should call for negotiations, non-binding resolutions or treaties to "create meaningful consequences for non-compliance and thus eliminate the risks for everyone."

China, however, mostly works independently in space and NASA is not allowed to "engage in any bilateral activities with China or Chinese-owned companies," according to the agency(opens in new tab). The country has also defended its practice of uncontrolled reentries, with China's foreign ministry saying in the past that the probability of issues "causing harm on the ground is extremely low."

Massive Long March 5B booster predicted to reenter on July 31

HELSINKI — The first stage of the Long March 5B rocket which launched China’s Wentian space station module could reenter the atmosphere around July 31, according to a prediction from the Aerospace Corporation.

The massive first stage of the rocket—which, exceptionally, also acts as the upper stage for the mission, inserting the payload into its intended orbit—also entered orbit. Initial tracking from U.S. Space Command showed the Wentian module, the Long March 5B booster and another related object from the launch were all in orbit.

Aerospace Corporation experts at the Center for Orbital and Reentry Debris Studies (CORDS) have been closely tracking the 53.6-meter-tall stage, which is thought to have a mass of around 23 metric tons.

They predict a reentry centered on 11:07 UTC (7:07 a.m. Eastern) 31 July, plus or minus 24 hours. The large window for the reentry is due to the challenges of modeling, including variables such as atmospheric fluctuations which affect how quickly the orbit of an object decays. Prediction windows will narrow closer to the reentry event.

The most likely scenario is that the stage reenters over the oceans. There is however a “non-zero probability of the surviving debris landing in a populated area—over 88 percent of the world’s population lives under the reentry’s potential debris footprint,” according to an Aerospace Corporation post stated July 26.

“A reentry of this size will not burn up in the Earth’s atmosphere, and the general rule of thumb is that 20–40 percent of the mass of a large object will reach the ground, though it depends on the design of the object,” the post states.

Two previous launches of the Long March 5B resulted in uncontrolled reentries of the rocket’s first stage, in 2020 and 2021.

First stages for orbital launches typically do not reach orbital velocity and fall within a calculated area downrange. Some upper stages, including China’s Long March 2D, restart their engines after delivering a payload into orbit and deorbit themselves to reduce space debris and the risk of collisions in orbit.

However, many upper stages make uncontrolled reentries. Chinese foreign ministry spokesperson Wang Wenbin said last year ahead of the reentry for the booster that launched Tianhe that it was “common practice across the world for upper stages of rockets to burn up while reentering the atmosphere.”

A recent Nature Astronomy paper assesses that current practices mean there is a 10 percent chance of uncontrolled reentries causing one or more casualties over a decade.

Without the ability to restart its engines, the Long March 5B reentry will be uncontrolled. The spent booster will gradually lose altitude due to increasing collisions with molecules in the Earth’s atmosphere, and eventually reenter the atmosphere somewhere between 41 degrees north and 41 degrees south.

The stage’s orbit sees to reach a latitude a little farther north than New York, Madrid, and Beijing, and as far south as southern Chile and Wellington, New Zealand. Ground tracks for individual orbits are shown in an Aerospace Corporation illustration.

China is planning two further Long March 5B launches. The first, scheduled for October, will send a third space station module named Mengtian into orbit. A Hubble-class space telescope, Xuntian, will be launched around 2024 and co-orbit with the completed Tiangong space station.

Tianzhou-3 launched in September last year to deliver supplies to the Tianhe space station module ahead of the six-month-long Shenzhou-13 crewed mission.

The spacecraft is expected to be commanded to fire its engines to effect a reentry over the South Pacific, as with the earlier Tianzhou missions, and inline with international practice.

Most of the spacecraft's components burned up during the re-entry, and a small amount of its debris fell into the scheduled safe waters of the South Pacific, the CMSA said.

Launched on Sept. 20, 2021, the Tianzhou-3 cargo craft delivered about 6 tonnes of supplies to the country's space station. While in orbit, the cargo craft conducted two rendezvous and docking operations with the combination of the Tianhe core module, and carried out a test flight circling the space station.

After its separation from the Tianhe combination on July 17, it carried out space technology tests, accumulating important experience for the in-orbit construction as well as the operation and management of the space station.