Two tough, resilient, NASA spacecraft have been orbiting Earth for the past six and a half years, flying repeatedly through a hazardous zone of charged particles around our planet called the Van Allen radiation belts. The twin Van Allen Probes, launched in August 2012, have confirmed scientific theories and revealed new structures and processes at work in these dynamic regions. Now, they're starting a new and final phase in their exploration.

On Feb. 12, 2019, one of the twin Van Allen Probes begins a series of orbit descent maneuvers to bring its lowest point of orbit, called perigee, just under 190 miles closer to Earth. This will bring the perigee from about 375 miles to about 190 miles — a change that will position the spacecraft for an eventual re-entry into Earth's atmosphere about 15 years down the line.

“In order for the Van Allen Probes to have a controlled re-entry within a reasonable amount of time, we need to lower the perigee,” said Nelli Mosavi, project manager for the Van Allen Probes at the Johns Hopkins Applied Physics Laboratory, or APL, in Laurel, Maryland.  “At the new altitude, aerodynamic drag will bring down the satellites and eventually burn them up in the upper atmosphere. Our mission is to obtain great science data, and also to ensure that we prevent more space debris so the next generations have the opportunity to explore the space as well."

The other of the two Van Allen Probes will follow suit in March, also commanded by the mission operations team at APL, which designed and built the satellites.

The Van Allen Probes spend most of their orbit within Earth's radiation belts: doughnut-shaped bands of energized particles — protons and electrons — trapped in Earth's magnetic field. These fast-moving particles create radiation that can interfere with satellite electronics and could even pose a threat to astronauts who pass through them on interplanetary journeys. The shape, size and intensity of the radiation belts changes in response to solar activity, which makes predicting their state difficult.

Originally designated as a two-year mission — based on predictions that no spacecraft could operate much longer than that in the harsh radiation belts — these rugged spacecraft have operated without incident since 2012, and continue to enable groundbreaking discoveries about the Van Allen Belts.

“The Van Allen Probes mission has done a tremendous job in characterizing the radiation belts and providing us with the comprehensive information needed to deduce what is going on in them,” said David Sibeck, mission scientist for the Van Allen Probes at NASA’s Goddard Space Flight Center in Greenbelt, Maryland. “The very survival of these spacecraft and all their instruments, virtually unscathed, after all these years is an accomplishment and a lesson learned on how to design spacecraft.”

Each spacecraft will be moved to a new, lower perigee of about 190 miles above Earth through a series of five two-hour engine burns. Because the Van Allen Probes spin while in orbit, the dates of these burns had to be chosen carefully. The needed geometry happens just once or twice per year: for spacecraft B, that period falls Feb. 12-22 of this year, and for spacecraft A, it's March 11-22. 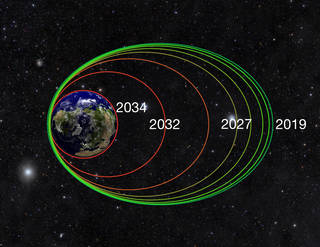 After performing de-orbit maneuvers in February and March 2019, the Van Allen Probes' highly elliptical orbits will gradually tighten over the next 15-25 years as the spacecraft experience atmospheric drag at perigee, the point in their orbits closest to Earth. This atmospheric drag will pull them into a circular orbit as early as 2034, at which point the spacecraft will begin to enter Earth's atmosphere and safely disintegrate.
Credits: Johns Hopkins APL

The engine burns will each use about 4.4 pounds of propellant, leaving the spacecraft with enough fuel to keep their solar panels pointed at the Sun for about one more year.

“We’ll continue to operate and obtain new science in our new orbit until we are out of fuel, at which point we won’t be able to point our solar panels at the Sun to power the spacecraft systems," said Mosavi.

During their last year or so of life, the Van Allen Probes will continue to gather data on Earth's dynamic radiation belts. And their new, lower passes through Earth's atmosphere will also provide new insight into how oxygen in Earth's upper atmosphere can degrade satellite instruments — information that could help engineers design more resilient satellite instruments in the future.

“The spacecraft and instruments have given us incredible insight into spacecraft operations in a high-radiation environment,” said Mosavi. “Everyone on the mission feels a real sense of pride and accomplishment in the work we’ve done and the science we’ve provided to the world — even as we begin the de-orbiting maneuvers.”