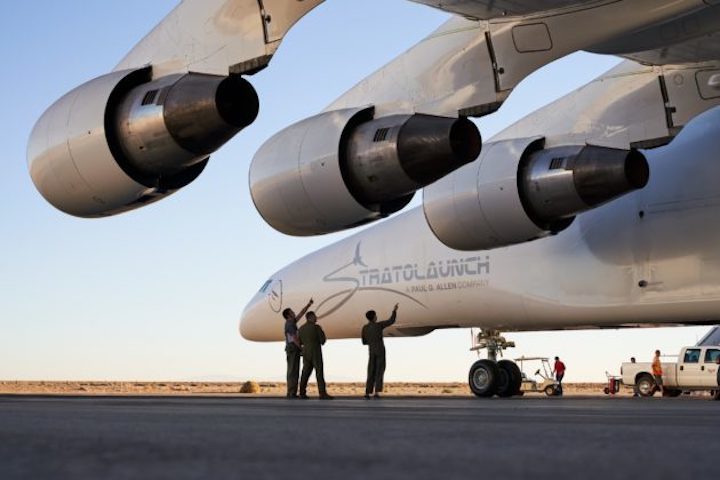 The Federal Aviation Administration has cleared the world’s largest airplane for takeoff — but it’s not yet clear exactly when Stratolaunch, the aerospace venture founded by the late Microsoft co-founder Paul Allen, will put the plane in the air.

Stratolaunch’s unique aircraft, code-named Roc, measures 385 feet from wingtip to wingtip, longer than three Boeing 737s lined up end to end. The company hopes to win full FAA certification for the Roc and use it for airborne rocket launches as soon as next year.

Scaled Composites, the California-based company that built the Roc for Stratolaunch, told the FAA last August that the aircraft was ready for inspection, according to filings obtained by GeekWire.

Ten days after that inspection, the FAA issued an experimental airworthiness certificate clearing the way for flight tests at Mojave Air and Space Port in California.

Scaled told the FAA that this “envelope expansion flight testing” would involve approximately 15 flights over 40 hours. The certificate does not allow commercial operation.

Since winning the experimental airworthiness certificate, Stratolaunch has moved ahead with taxi tests at Mojave, including a test in January that reached 136 mph and involved the Roc lifting its nose wheels off the ground.

Once the plane takes to the air, its FAA certificate will cover tests in the country’s largest special use airspace, a 20,000-square-mile area including Edwards Air Force Base and other military facilities.

Stratolaunch was born out of Allen’s passion for spaceflight — and out of his backing for the SpaceShipOne rocket plane, which became the first privately funded vehicle to reach outer space in 2004.

Like SpaceShipOne, Stratolaunch’s Roc project relies on air launch from a twin-fuselage aircraft.

For its prize-winning flights in 2004, the SpaceShipOne rocket plane was carried up to high altitude by a mothership, then dropped into free flight to fire up its hybrid rocket motor and push upward into space.

Virgin Galactic’s SpaceShipTwo passenger space plane, backed by British billionaire Richard Branson, is a scaled-up version of SpaceShipOne, as is the Stratolaunch system. (Branson’s Virgin Orbit business also plans to deliver satellites from a rocket launched in mid-air, although this uses a modified 747 rather than a custom twin-fuselage plane).

Stratolaunch’s Roc airplane is by far the largest and ambitious of the airborne launchers. It is largely constructed from strong, lightweight composite materials, although it also reuses many components and systems from the Boeing 747. Allen reportedly spent hundreds of millions of dollars developing the Roc, and the fleet of rockets and spaceplanes designed to be launched from it.

NASA has been helping Stratolaunch to engineer and test new rocket engines for those vehicles. Last spring, Stratolaunch signed a Space Act Agreement committing to pay the space agency nearly $7 million for its technical support.

However, a lot has changed since Allen’s death in October.

Last month, Stratolaunch suddenly discontinued development of the new rocket engine (named the PGA in honor of Paul G. Allen) and its launch vehicles. More than 50 employees were laid off, sources told GeekWire.

Stratolaunch would not confirm whether the full $7 million due to NASA in January for engine testing had been paid.

“We are streamlining operations, focusing on the aircraft and our ability to support a demonstration launch of the Northrop Grumman Pegasus XL air-launch vehicle,” the company wrote in a statement.

The Pegasus family of air-launched rockets have reached orbit 40 times since their debut in 1990, although its most recent attempt — to launch a NASA satellite in November — was aborted at the last minute.

Stratolaunch’s streamlining appears to have started soon after Allen’s death.

Stratolaunch Federal Inc. is a subsidiary of Stratolaunch, listing its address as a post office box in Huntsville, Ala. Although the company was formed in 2017, Stratolaunch did not pay the small annual fees required to keep it going, and the company’s registration was terminated late last year.

However, Stratolaunch has yet to begin flight tests, and it’s not clear when the first test will be flown. In its letter to the FAA, Stratolaunch requested that its experimental airworthiness certificate last for a year, raising the possibility of a transition to commercial operations late this summer.