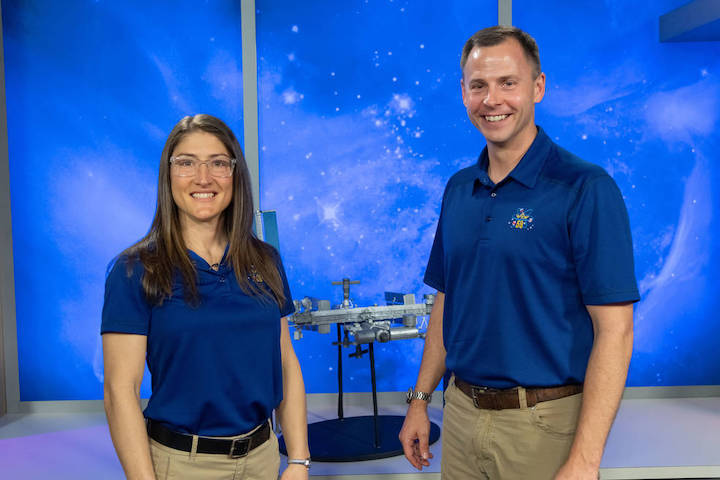 NASA astronauts (from left) Christina Koch and Nick Hague will launch aboard the Russian Soyuz MS-12 spacecraft March 14, 2019, from the Baikonour Cosmodrome in Kazakhstan.
Credits: NASA

NASA astronauts Nick Hague and Christina Koch will be available for live satellite interviews Friday, Feb. 22, as they undergo final training before their launch to the International Space Station, scheduled for March 14.

Originating from the Gagarin Cosmonaut Training Center in Star City, Russia, the interviews will air live on NASA Television and the agency’s website.

To interview Hague, media must contact Mary Beth Boddeker at 281-483-2167 or mary.b.boddeker@nasa.gov no later than 3 p.m. Wednesday, Feb. 20. To interview Koch, media must contact Sarah Volkman at 281-483-9071 or sarah.e.volkman@nasa.gov no later than 3 p.m. Wednesday Feb. 20. Media participating in the interviews must tune to the NASA TV Media Channel (NTV-3). Satellite tuning information is available at:

Hague and Koch, along with Russian cosmonaut Alexey Ovchinin of the Russian space agency Roscosmos, will launch on the Russian Soyuz MS-12 spacecraft at 3:14 p.m. EDT Thursday, March 14 (12:14 a.m. Friday, March 15, Baikonur time), from the Baikonur Cosmodrome in Kazakhstan. They will travel from Star City to Baikonur on Tuesday, Feb. 26, for final pre-launch preparations.

After a six-hour journey in orbit, they will arrive at the station and dock their spacecraft to the Rassvet module on the Earth-facing port of the Russian segment of the complex. They will then join fellow NASA astronaut Anne McClain, station commander Oleg Kononenko of Roscosmos, and David Saint-Jacques of the Canadian Space Agency, restoring the station to a standard crew of six. At the time of docking, Expedition 59 will begin aboard the orbital outpost.

For Hague and Ovchinin, this will be an opportunity to complete the journey to the station that ended prematurely on Oct. 11, when one of the four liquid-fueled strap-on boosters on their Soyuz MS-10 spacecraft failed to separate properly, resulting in an abort. They landed safely after a flight lasting only about 30 minutes. This will be the second flight for Hague, the third for Ovchinin and the first for Koch.

During the planned six-month mission, the station crew will take part in about 250 research investigations and technology demonstrations not possible on Earth. Science conducted on the space station continues to yield benefits for humanity and will enable future long-duration human and robotic exploration into deep space. The crew also is scheduled to be aboard during test flights of NASA’s Commercial Crew Program, which will resume human spaceflight launches from U.S. soil.

Hague is a native of Hoxie, Kansas, and a colonel in the U.S. Air Force. Prior to his selection, he was part of the Air Force Fellows program in Washington, where he worked as an adviser to the U.S. Senate on matters of national defense and foreign policy. He earned a bachelor’s degree in astronautical engineering from the U.S. Air Force Academy and a master’s degree in aeronautical and astronautical engineering from the Massachusetts Institute of Technology. NASA selected him as an astronaut in 2013.

Koch, who grew up in Jacksonville, North Carolina, earned bachelor’s degrees in electrical engineering and physics and a master’s degree in electrical engineering from North Carolina State University in Raleigh. Her career includes experience as an electrical engineer, focusing on space science instrument design, at NASA’s Goddard Space Flight Center in Greenbelt, Maryland, and the Johns Hopkins University’s Applied Physics Lab, in Laurel, Maryland. She also worked as a research associate with the U.S. Antarctic Program, completing several deployments, including a winter at the South Pole. Her work at remote scientific research stations went on to include sessions as a field engineer in the Arctic and as station chief with the National Oceanic and Atmospheric Administration (NOAA) in American Samoa. NASA also selected her as an astronaut in 2013.