Stunning new versions of the first images from the James Webb Space Telescope were released today from NASA, thanks to the combined power of the Webb telescope and another NASA flagship mission, the Chandra X-ray observatory. The Webb Telescope and the Chandra X-ray observatory were both designed and built in partnership with Northrop Grumman Corporation (NYSE: NOC).

NASA released the Chandra X-ray versions of Webb’s first images on October 4, including updated versions of Webb’s galaxy cluster SMACS 0723, Stephan’s Quintet, a star cluster in the Carina Nebula, and the Cartwheel galaxy. To achieve these images, the Chandra X-ray uses its highly sensitive X-ray telescope, imaging spectrometer, high-resolution camera and associated devices to detect X-ray emission from very hot regions of the Universe such as exploding stars, clusters of galaxies and dark matter. 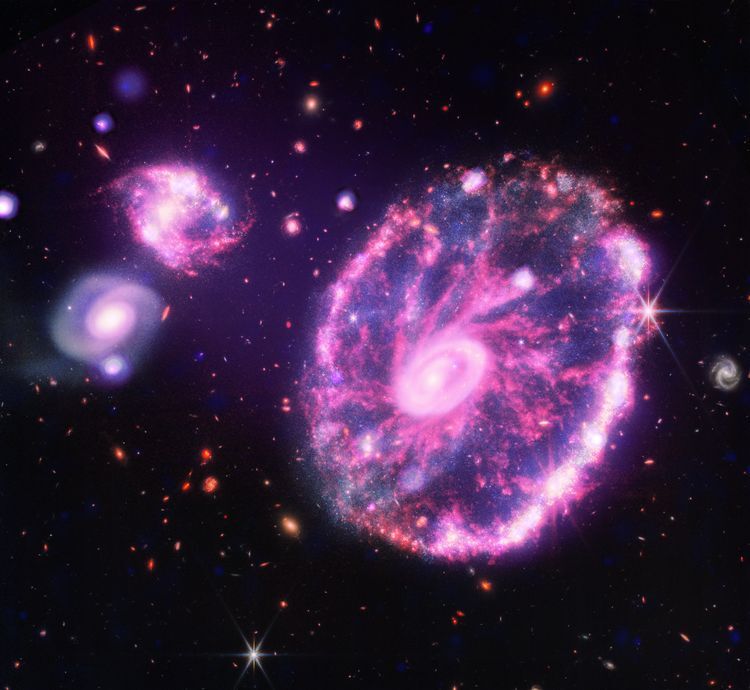 The Cartwheel galaxy gets its shape from a collision with another smaller galaxy – located outside the field of this image – about 100 million years ago. When this smaller galaxy punched through the Cartwheel, it triggered star formation that appears around an outer ring and elsewhere throughout the galaxy. X-rays seen by Chandra (blue and purple) come from superheated gas, individual exploded stars, and neutron stars and black holes pulling material from companion stars. Webb’s infrared view (red, orange, yellow, green, blue) shows the Cartwheel galaxy plus two smaller companion galaxies – not part of the collision – against a backdrop of many more distant galactic cousins. The Webb Telescope and the Chandra X-ray observatory were both designed and built in partnership with Northrop Grumman.

“Both Chandra and Webb push beyond what’s thought to be possible,” said Charlie Atkinson, chief engineer, James Webb Space Telescope, Northrop Grumman, who worked on both of these Great Observatories. “These remarkable images from both telescopes complement each other to reveal incredible new details and further expand our understanding of the cosmos.”

Chandra, which launched in 1999, was unprecedented in terms of its high-resolution X-ray vision and collecting area. It remains the world’s most powerful X-ray telescope. The James Webb Space Telescope, launched in 2021, is the world’s largest, most complex and powerful infrared space telescope ever built. A key feature of Webb is its ability to work together with other NASA space telescopes like Chandra, in addition to ground-based telescopes on Earth.

Northrop Grumman leads the industry team for the Webb program and NASA heads an international partnership that includes both the European Space Agency and Canadian Space Agency. Goddard Space Flight Center manages the Webb Telescope project, and the Space Telescope Science Institute is responsible for science and mission operations, as well as ground station development.

To learn more about Northrop Grumman’s role on the Webb Telescope and Chandra, please visit:

Northrop Grumman is a technology company, focused on global security and human discovery. Our pioneering solutions equip our customers with capabilities they need to connect, advance and protect the U.S. and its allies. Driven by a shared purpose to solve our customers’ toughest problems, our 90,000 employees define possible every day.