The asteroid broke away from a larger body and migrated toward Earth, a new analysis has revealed. 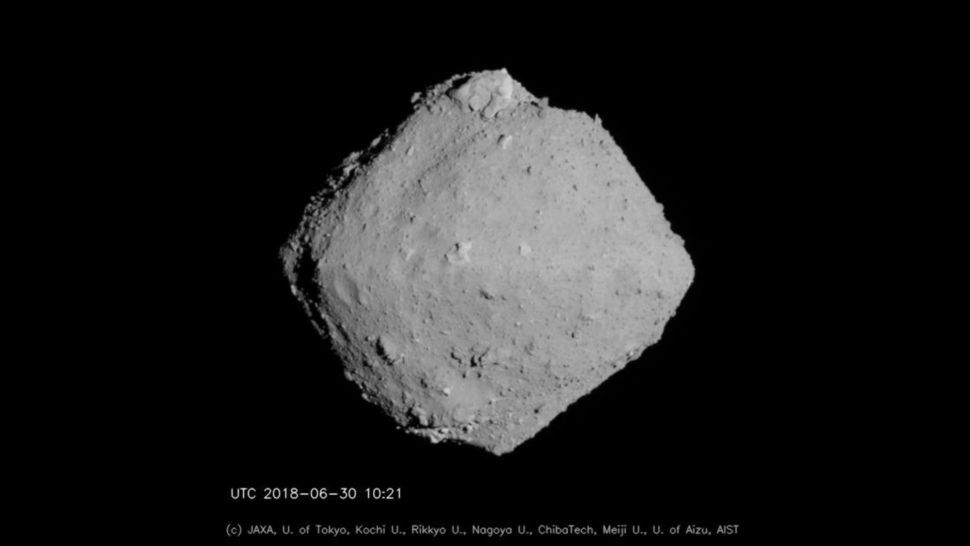 An analysis of samples collected from the asteroid Ryugu has revealed its origins and birthplace.

The findings show that even though Ryugu is now classified as a near-Earth object, its journey to the inner solar system began hundreds of millions of miles away and billions of years ago.

Asteroids like Ryugu are composed of unspoiled material left over from the formation of the solar system 4.5 billion years ago. This means they contain information about the chemical state of the early solar system that could lead to a better understanding of how our cosmic backyard has evolved.

Ryugu — which now comes within 60,000 miles (97,000 kilometers) of Earth, was visited by the Japan Aerospace Exploration Agency's (JAXA) Hayabusa2 spacecraft in 2019.

In 2020, Hayabusa2 collected and returned samples that have now been analyzed by teams of scientists across the globe. Different groups used dozens of investigative techniques to analyze qualities of the samples, such as their stone shapes, elemental distribution and mineral composition.

One team, from the U.S. Department of Energy's Argonne National Laboratory, used an X-ray technique called Mössbauer spectroscopy to search for tiny changes in the chemistry of Ryugu samples by investigating the fragments of each particle.

Their results were surprising.

"There is enough evidence that Ryugu started in the outer solar system," Esen Ercan Alp, a senior physicist in the X-Ray Science division at Argonne National Lab who led the research, said in a statement. ​"Asteroids found in the outer reaches of the solar system would have different characteristics than those found closer to the sun."

One piece of evidence that Ryugu originated at the edges of the solar system is that the grains that make up the asteroid are finer than they would be if they had formed at the higher temperatures found closer to the sun.

Additionally, the fragments are porous, indicating they once held water and ice.

Carbon dioxide and water would have existed in solid form at around three to four times the distance from the sun to Earth, meaning Ryugu's parent body was located at least that far away, possibly even beyond the orbit of Jupiter.

Unlike asteroid fragments that reach Earth's surface after tumbling through our planet's oxygen-rich atmosphere, the pieces of Ryugu were delivered to Earth in vacuum-sealed containers, so they had never been exposed to oxygen. Therefore, the team could assess the oxidation that the Ryugu samples had experienced.

Their analysis revealed that the chemical makeup of the Ryugu samples is similar to those of meteorites that have hit Earth, particularly a rare group called CI chondrites, of which there are just nine known samples on the planet.

Using spectroscopy, the researchers found another characteristic that distinguished the Ryugu samples: a large amount of pyrrhotite, an iron sulfide that is lacking in the dozen other meteorite samples they examined.

Ryugu is believed to have formed when a larger body was smacked by another space rock, and like the fingerprint of ice, a large amount of pyrrhotite helps to limit where Ryugu's parent asteroid was located when this collision happened.

"Our results and those from other teams show that these asteroid samples are different from meteorites, particularly because meteorites have been through fiery atmosphere entry, weatherization, and in particular oxidation on Earth," Michael Hu, a physicist at Argonne and a member of the research team, said in the statement. "This is exciting because it's a completely different kind of sample, from way out in the solar system."

Together with research from hundreds of other scientists across 11 institutions, the results from Argonne lay out billions of years of Ryugu's history.

Thus far, the research indicates that Ryugu's parent body formed around 2 million years after the solar system did. Although this parent body was initially composed of many different materials — including water and carbon dioxide ice — over the following 3 million years, this ice melted and left a hydrated interior and a relatively dry surface.

A billion years or so later, the parent body experienced the cosmic collision that blasted off fragments that coalesced to become the asteroid we call Ryugu.

The fragments' lack of shocked materials, which are created by asteroid strikes or other impacts, indicates that Ryugu formed away from the collision and then migrated toward the inner solar system, the researchers said.

"For planetary scientists, this is first-degree information coming directly from the solar system, and hence it is invaluable," Alp said.

The Argonne team's results are part of a paper published in the journal ScienceSept. 22 containing the work of many teams that have been analyzing Ryugu samples. The Argonne team will publish their results separately at a later date.