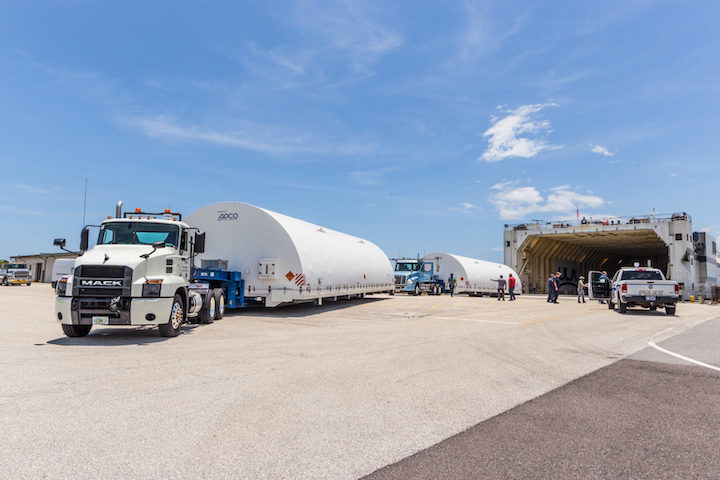 With just one year to go before the greatly-anticipated maiden voyage of its Vulcan-Centaur heavylifter, United Launch Alliance (ULA) has recently welcomed a new-style payload fairing to Cape Canaveral, targeting flights aboard upcoming Atlas V vehicles. The fairing—known as “Out-of-Autoclave” (OoA)—was fabricated by ULA’s strategic partner, RUAG Space USA, based in Decatur, Ala., and was transported to the Space Coast aboard the RocketShip vessel. It is expected that the OoA method will make the fabrication of future payload fairings for Vulcan-Centaur missions more affordable and easier to build. By flying on an Atlas V, ULA hopes to gain valuable “real-world”, risk-reduction experience before committing it to the new launcher. 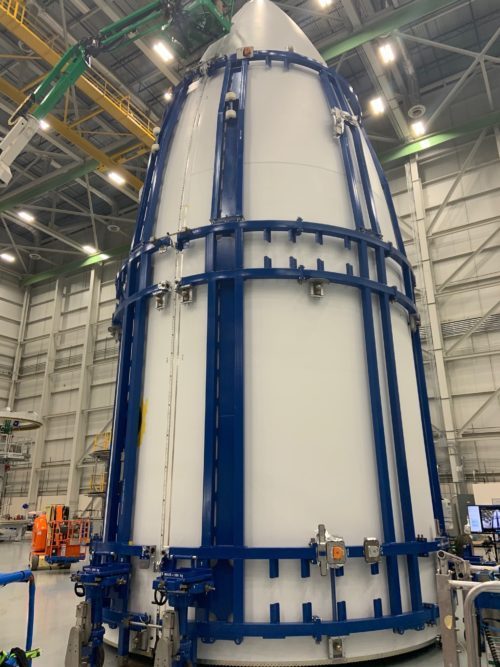 Unlike traditional methods of curing carbon-fiber composites in high-pressure autoclaves (which are not only expensive, but also restrict the size of components which can fit inside), the OoA process uses a single oven and allows fairings to be produced in two halves. This is expected to prove cheaper and more straightforward than the 18 or more smaller sections which could be cured in an autoclave. “Utilizing the OoA manufacturing approach allows for a more efficient production process, lower cost and lower system mass while maintaining the same level of reliability and quality as the heritage in-autoclave composites,” said Amanda Bacchetti, the ULA payload accommodations lead for Vulcan-Centaur.

The process generates a lower likelihood of opportunities for defects, reduces the need for fasteners and doublers to hold the fairing pieces together and promises a quicker manufacturing time. And unlike the Centaurs which currently ride atop Atlas V boosters—in which the payload fairing encloses the upper stage—the Vulcan-Centaur fairing will reside atop it, rendering production simpler and more affordable.

“All that simplification leads to lower costs, higher reliability and less weight, which is an important point in the launch industry,” said Robbie Harris, program office manager at RUAG Space USA. “The Vulcan-Centaur fairing is a further evolution of the payload fairing design. It will be the same in terms of the Out-of-Autoclave material technology, but RUAG Space and ULA have worked together to eliminate some of the manufacturing steps that need to be taken after the cure.”

The strategic relationship between the two organizations dates back to July 2015, under which the Switzerland-based RUAG Space would establish a composites production arm within ULA’s 1.6-million-square-foot (150,000-square-meter) Decatur, Ala., premises. As a proven partner, RUAG had already built the 17.7-foot-diameter (5.4-meter) payload fairings, which, to date, have housed almost 30 successful Atlas V missions on their journeys to orbit. It was noted that as part of the deal, RUAG Space would begin to produce “several additional new structures” for the Vulcan-Centaur. Early in 2017, ULA presented RUAG Space the keys to its 132,000-square-foot (12,260-square-meter) facility in Decatur to commence work on payload fairings and interstage adapters for future missions.

ULA has already highlighted its intent to fly “a significant portion”—around 90 percent—of future Vulcan-Centaur systems aboard in-service Atlas V and Delta IV vehicles. The giant new rocket was originally scheduled to make its first flight in 2019, but last year it was announced that this has slipped into the second half of 2021.

Vulcan-Centaur entered the popular consciousness back in the late spring of 2014, when Russia’s sudden annexation of Crimea triggered concerns about ULA purchasing RD-180 rocket engines from a Russian company to power its Atlas V. In September of that year, ULA and Blue Origin agreed to jointly fund development of the liquid oxygen/liquefied natural gas BE-4 engine, with an expectation that it would support both companies’ Next Generation Launch Systems (NGLS), beginning in 2019. And in the fall of 2015, production of the engine was expanded to include the BE-4 to power ULA’s next booster.

By this stage, that booster had drawn the name “Vulcan” from a group of five names proposed by ULA employees and space enthusiasts. Cited as “the highest-performing, most cost-efficient rocket on the market”, it will utilize a pair of BE-4 engines with a combined propulsive yield at T-0 of 1.1 million pounds (500,000 kg). Added to this, it could carry up to six Northrop Grumman Corp.-built GEM-63XL solid-fueled strap-on boosters and a Centaur upper stage with twin RL-10 engines. And in its most powerful configuration, with six strap-on boosters, the Vulcan-Centaur carries the potential to deliver a liftoff punch of approximately 3.8 million pounds (1.7 million kg) and loft up to 56,000 pounds (25,400 kg) to low-Earth orbit, 33,000 pounds (14,970 kg) to geostationary transfer orbit or 16,000 pounds (7,260 kg) directly to geostationary altitude.

Vulcan-Centaur smoothly passed through its Preliminary Design Review (PDR) in early 2016, producing what ULA CEO Tory Bruno described as “a strong path” towards a first mission for the rocket in 2019. But the protracted development process caused this date to move gradually to the right and with the completion of the Critical Design Review (CDR) last May the way forward was signaled for transition from the design phase into the formal qualification phase. At length, ULA indicated that the Vulcan-Centaur would stage its inaugural flight no earlier than 2021.

Payloads are gradually building for the new vehicle. In mid-2017, Astrobotic contracted with ULA to launch its Peregrine lunar lander “onboard a ULA launch vehicle” in 2019, with an original expectation that this might be an Atlas V, before confirmation last August that it would in fact ride the Vulcan-Centaur’s maiden voyage in 2021. In the very same week of August, Sierra Nevada Corp. (SNC) also revealed that its Dream Chaser spacecraft—one of three cargo vehicles for the International Space Station (ISS), under the Commercial Resupply Services (CRS2) contract—will also fly atop the Vulcan-Centaur. Six Dream Chaser missions are currently contracted to NASA.

Additionally, as a long-time provider of launch services to America’s national security agencies, it is unsurprising that Vulcan-Centaur will continue this heritage. In September 2016, ULA and the Air Force’s Space and Missile Systems Center (SMC) started the certification process to support future National Security Space (NSS) missions.