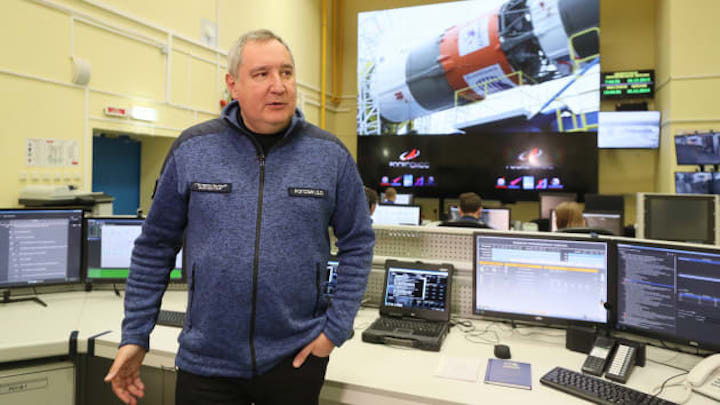 Roscosmos head Dmitry Rogozin visits the control centre for a launch pad for the Soyuz-2 carrier rockets at the Vostochny Cosmodrome in Russia.
Yegor AleyevTASS via Getty Images

The head of Russia’s space organization criticized the current United States plan to return astronauts to the moon as “a big political project,” saying his country is instead speaking with China about establishing a lunar base of operations.

NASA last year announced its Artemis program, the agency’s plan to fulfill President Donald Trump’s order in 2017 to return Americans to the surface of the moon by 2024. Additionally, NASA in May unveiled the “Artemis Accords” — a set of principles it seeks to use as the basis of international agreements with other countries about using and operating in space, especially as the U.S. returns to the moon.

But Dmitry Rogozin, the leader of state-backed space corporation Roscosmos, said Russia does not intend to join any such U.S. partnership. CNBC translated Rogozin’s comments from an interview with Russian tabloid Komsomolskaya Pravda, published on Monday.

“For the United States, this right now is a big political project. With the lunar project, we are observing our American partners retreat from principles of cooperation and mutual support, which formed in collaboration with the [International Space Station]. They are perceiving their program not as an international one, but one resembling NATO,” Rogozin said.

NASA and the White House did not respond to CNBC’s requests for comment on Rogozin’s remarks.

Rogozin declared that Russia is not interested in participating in NASA’s Artemis, but hinted that “there are other projects that interest us.” One such possibility for Roscosmos: Joining China in building a base on the moon’s south pole. Rogozin emphasized that he recently spoke with the leadership of China’s space agency about shaping such a partnership.

“We agreed to begin the first steps toward meeting each other halfway, namely by determining the contours and value of a lunar scientific base,” Rogozin said.

The moon seen from the International Space Station on July 9, 2018.
Alexander Gerst | NASA

While he did not rule out partnering with other countries, “including Americans,” Rogozin said that Russia and China intend to lead the development of a lunar base. That effort would in essence compete with NASA’s Artemis plan, which aims to establish a continued presence on the surface of the Moon within the next decade. Despite the recent track record of U.S.-Russia cooperation in space, Rogozin declared China “a deserving partner” for his country.

“Today the relationship between Russia and China is very good. That’s why China, yes, is certainly our partner,” Rogozin said. “The Chinese have grown tremendously in the last few years.”

China has been steadily accelerating its space program in recent years, such as successfully landing a lunar rover on the far side of the moon in a historic first last year.

Despite the shift in Russia’s intentions, Rogozin said existing agreements with the U.S. continue “to be a valuable bridge for cooperation.” He emphasized his good relationship with NASA administrator Jim Bridenstine, which he hopes continues.

“I trust that this collaboration will persist and will be to a less degree subject to the impact of a dumb political environment, which, unfortunately, is what comes out of Washington today,” Rogozin said.

NASA published comments from Bridenstine about the Artemis program’s goals of international collaboration on Tuesday, a day after Rogozin’s interview. Bridenstine highlighted that Japan, Canada and the European Space Agency are each partnering with NASA. Bridenstine addressed Rogozin’s comments in a statement to CNBC on Wednesday, emphasizing “the overwhelming support NASA has received from both emerging and traditional international space agencies” for Artemis.

“Building on our solid relationship with Roscosmos aboard the International Space Station in low-Earth orbit, I’m hopeful there are opportunities for NASA and Roscosmos to expand our collaboration farther into the solar system, including the Moon,” Bridenstine said in the statement.

SpaceX is ‘just at the beginning’

The launch of SpaceX’s first mission with NASA astronauts in May marked historic firsts for both the company and space agency. But for Russia, the SpaceX mission is the beginning of the end of nearly a decade of U.S. dependence on Russian Soyuz spacecraft to send astronauts to the International Space Station. Those Russian flights have come at a steadily increasing cost for the U.S. since the end of the Space Shuttle program in 2011, recently rising to more than $86 million per NASA astronaut.

Rogozin downplayed the SpaceX accomplishment, instead pointing to the track record of the Soyuz spacecraft.

“No matter what is said by the media or our American colleagues, they are only just at the beginning of the challenge of their new manned spacecraft,” Rogozin said. “Right now there is only one space transportation system that has monumental statistics of successful launches, with a proven emergency rescue system -- this is Soyuz MS.”

In comments more pointedly directed at Elon Musk’s space company, Rogozin emphasized that he believes space is more about function than sleek design.

“In space, one must run not after beautiful goods with wonderful labels, under the music of Bowie, but one must lean, first and foremost, on well-functioning systems. Especially there where it comes to people’s lives,” Rogozin said.