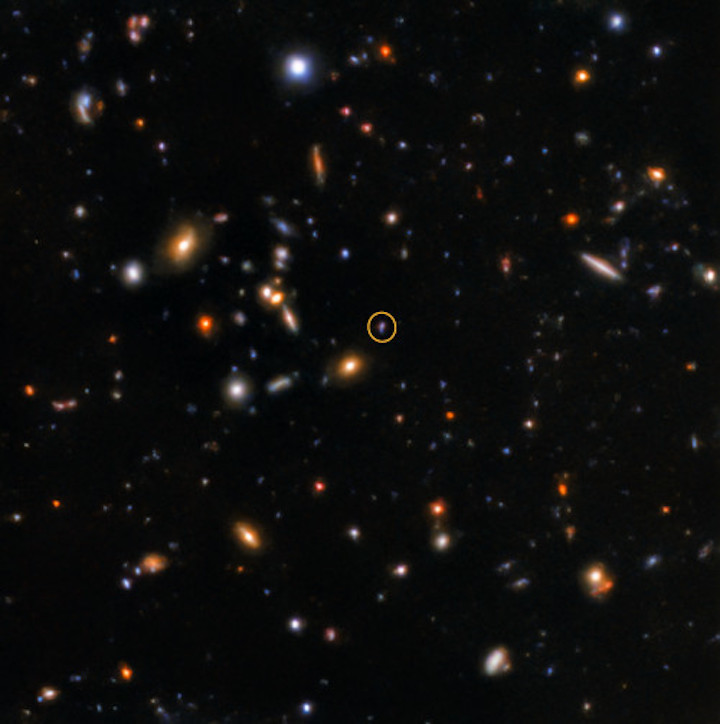 Rapid follow-up of the optical afterglow from one of the most distant confirmed short gamma-ray bursts (SGRB), thought to be the merger of two neutron stars, is casting new light on these enigmatic objects. The observations, made by the international Gemini Observatory, a Program of NSF’s NOIRLab, confirmed the object’s distance and placed it squarely in the epoch of cosmic high noon, when the Universe was in its “teenage years” and rapidly forming stars. The appearance of an SGRB so early in the history of the Universe could alter theories about their origin, in particular how long it takes two neutron stars to merge to produce these powerful events. Precisely-localized SGRBs are rare, typically only 7–8 are detected per year, and this is the most distant high-confidence SGRB with an optical afterglow detection.

Researchers have used the 8.1-meter Gemini North telescope to measure the optical afterglow of one of the most distant short gamma-ray bursts (SGRB) ever studied. Thought to result from the merger of two neutron stars, SGRBs are cataclysmic events that are almost unfathomable in terms of their basic properties, emitting huge amounts of energy in about one second [1]. Gemini observations of a new, distant SGRB now suggest that this process could occur surprisingly quickly for some systems — with massive binary star systems surviving supernova explosions to become neutron star binaries, and the binaries then spiraling together in less than a billion years to create an SGRB. The research will be published in The Astrophysical Journal Letters.

This object, named GRB181123B because it was the second burst discovered on 23 November 2018 — Thanksgiving night — was initially detected by NASA’s Neil Gehrels Swift Observatory. When the alert of an event from the Swift satellite was broadcast around the world, several telescopes trained their view on it. Within hours, a team from Northwestern University used the Gemini Multi-Object Spectrograph (GMOS), which is also an imager, on the Gemini North telescope on Maunakea in Hawai‘i to record the very faint afterglow of the object.

“We took advantage of the unique rapid-response capabilities and exquisite sensitivity of Gemini North and its GMOS imager to obtain deep observations of the burst mere hours after its discovery,” said Kerry Paterson of the Center for Interdisciplinary Exploration and Research in Astrophysics (CIERA) at Northwestern University, USA, who led the research team. “The Gemini images were very sharp, and allowed us to pinpoint the location to a specific galaxy.”

“This is a wonderful example of time-domain astronomy, involving extremely rapid follow-up of a quickly evolving event,” said Hans Krimm of the US National Science Foundation. “Gemini’s rapid response was critical to catching this event swiftly, and the optical and infrared data add to the excitement of multi-messenger astronomy — where observations of light, gravitational waves, neutrinos and cosmic rays come together to tell a compelling story.”

Along with the Gemini observations, the team made follow-up observations using the W. M. Keck Observatory in Hawai‘i and the Multi-Mirror Telescope (MMT), located at the Fred Lawrence Whipple Observatory on Mount Hopkins in Arizona. The researchers then utilized the Gemini South infrared camera and spectrograph, FLAMINGOS-2, in Chile to obtain a spectrum of the host galaxy to pin down the SGRB’s distance. The object was found to be some 10 billion light-years away, making it the second most distant confirmed SGRB, and the most distant high-confidence SGRB with an optical afterglow detection [2]. Compared to the detections of gravitational waves from merging neutron stars in the very nearby Universe, SGRBs are distant analogs.

“The identification of certain patterns in the spectrum, together with the colors of the galaxy from the three observatories, allowed us to precisely constrain the distance and solidify it as one of the most distant SGRBs to date in 16 years of Swift operations,” said Paterson.

Rapid follow-up of the burst discovery from Swift was essential. Many SGRBs cannot be observed with a telescope in time to catch the optical light. The light from the afterglow fades quickly and it can take a correspondingly long time for a large, sensitive telescope to interrupt its normal observing plan and move to the new target to begin its follow-up observations.

Once the optical detection of the SGRB was made with Gemini, and its host galaxy was identified, the team was able to determine key properties of the parent stellar population within the galaxy that produced the SGRB.

“Performing ‘forensics’ to understand the local environment of SGRBs and what their home galaxies look like can tell us a lot about the underlying physics of these systems, such as how SGRB progenitors form and how long it takes for them to merge,” said Wen-fai Fong of Northwestern University and co-author on the study. “We certainly did not expect to discover an extremely distant SGRB, as they are very rare and faint, but we were pleasantly surprised! This motivates us to go after every one that we possibly can.”

The majority of the 43 high-confidence SGRBs used in the study that have had their distances measured to date have been found closer to home. Distant SGRBs offer a unique way to study the same types of events when the Universe was much younger — a busy period in the Universe when stars were rapidly forming and galaxies were growing fast [3]. The addition of another very distant SGRB to the population could change astronomers’ understanding of these events — in particular, how long it takes two neutron stars to merge, and the rate of neutron star mergers during this epoch of the Universe’s history. “Finding an SGRB so early in the Universe’s history suggests that at least some neutron star pairs might need to come together relatively rapidly,” according to Fong.

“With the proper telescopic resources and dedicated follow-up facilities, such as the Gemini Observatory, we can open a new era of discovery of distant SGRBs, motivating further follow-up studies of past events and similarly intense follow-up of future ones,” said Paterson. 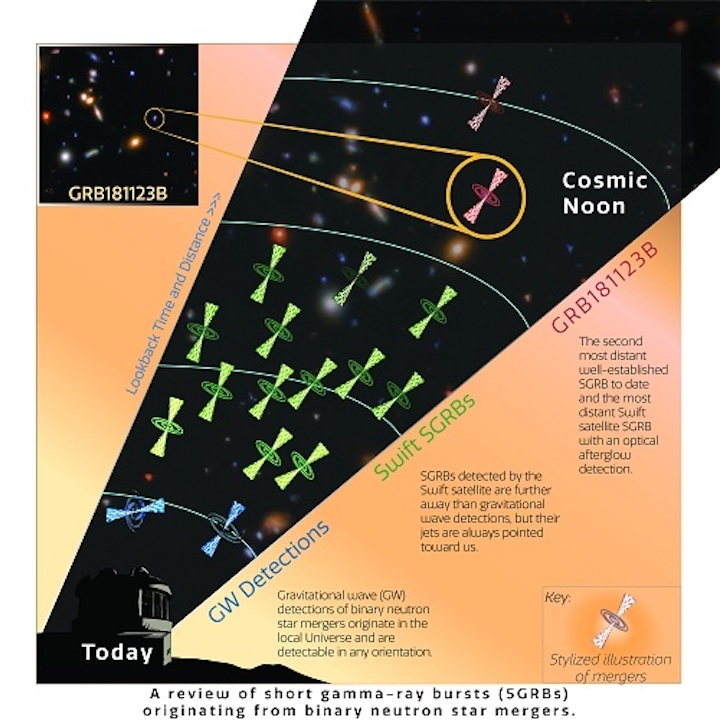 An artist’s impression of how GRB11823B compares to other short gamma-ray bursts. It is the second most distant short gamma-ray burst to ever be detected, and the most distant to have its optical afterglow captured — thanks to the quick response time of the Gemini North telescope. Except when they are detected by gravitational wave observatories, the gamma-ray bursts can only be detected from Earth when their jets of energy are pointed towards us. Credit:: International Gemini Observatory/NOIRLab/NSF/AURA/J. Pollard/K. Paterson & W. Fong (Northwestern University). Image processing: Travis Rector (University of Alaska Anchorage), Mahdi Zamani & Davide de Martin