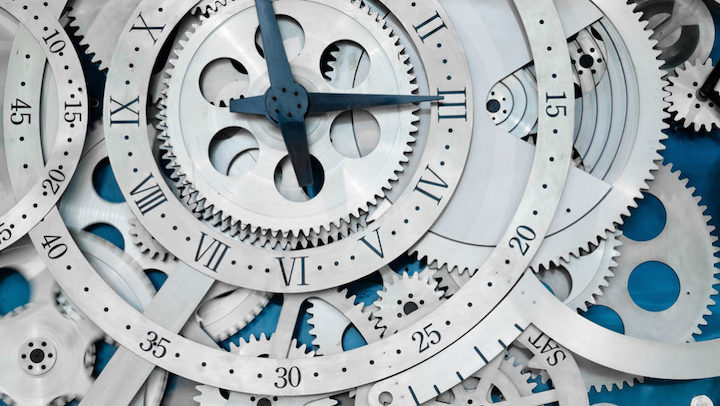 Like a metronome that sets the tempo for a musician, a fundamental cosmic clock may be keeping time throughout the universe. But if such a clock exists, it ticks extremely fast.

In physics, time is typically thought of as a fourth dimension. But some physicists have speculated that time may be the result of a physical process, like the ticking of a built-in clock.

If the universe does have a fundamental clock, it must tick faster than a billion trillion trillion times per second, according to a theoretical study published June 19 in Physical Review Letters.

In particle physics, tiny fundamental particles can attain properties by interactions with other particles or fields. Particles acquire mass, for example, by interacting with the Higgs field, a sort of molasses that pervades all of space (SN: 7/4/12). Perhaps particles could experience time by interacting with a similar type of field, says physicist Martin Bojowald of Penn State. That field could oscillate, with each cycle serving as a regular tick. “It’s really just like what we do with our clocks,” says Bojowald, a coauthor of the study.

Time is a puzzling concept in physics: Two key physics theories clash on how they define it. In quantum mechanics, which describes tiny atoms and particles, “time is just there. It’s fixed. It’s a background,” says physicist Flaminia Giacomini of the Perimeter Institute in Waterloo, Canada. But in the general theory of relativity, which describes gravity, time shifts in bizarre ways. A clock near a massive object ticks slower than one farther away, so a clock on the surface of the Earth lags behind one aboard an orbiting satellite, for example (SN: 12/10/18).

In attempts to combine these two theories into one theory of quantum gravity, “the problem of time is actually quite important,” says Giacomini, who was not involved with the research. Studying different mechanisms for time, including fundamental clocks, could help physicists formulate that new theory.

Physicists suspect that there’s an ultimate limit to how finely seconds can be divided. Quantum physics prohibits any slice of time smaller than about 10-43seconds, a period known as the Planck time. If a fundamental clock exists, the Planck time might be a reasonable pace for it to tick.

To test that idea, scientists would need to increase their current limit on the clock’s ticking rate — that billion trillion trillion times per second number — by a factor of about 20 billion. That seems like a huge gap, but to some physicists, it’s unexpectedly close. “This is already surprisingly near to the Planck regime,” says Perimeter physicist Bianca Dittrich, who was not involved with the research. “Usually the Planck regime is really far away from what we do.”

However, Dittrich thinks that there’s probably not one fundamental clock in the universe, but rather there are likely a variety of processes that could be used to measure time.

Still, the new result edges closer to the Planck regime than experiments at the world’s largest particle accelerator, the Large Hadron Collider, Bojowald says. In the future, even more precise atomic clocks could provide further information about what makes the universe tick.

Astronomie - The universe might have a fundamental clock that ticks very, very fast Time could be the result of particles interacting with a ticking cosmic timepiece
226 Views
Created with page4