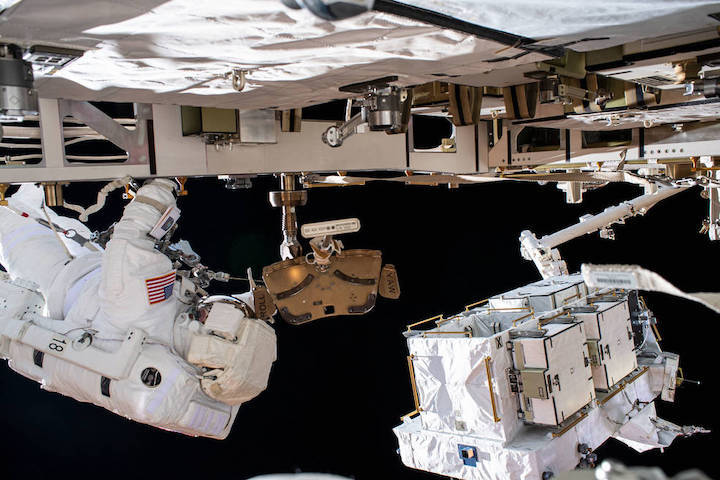 NASA astronaut Bob Behnken (at left) is pictured during a spacewalk to swap batteries and upgrade power systems on the International Space Station's Starboard-6 truss structure. Pictured at lower right, is an external pallet, gripped by the Canadarm2 robotic arm, that housed the batteries replaced on the orbiting lab. Behnken was joined during the six-hour and seven-minute excursion by NASA astronaut Chris Cassidy (out of frame).
Credits: NASA

Coverage each day will begin at 6 a.m. EDT on NASA Television and the agency’s website. The spacewalks will begin around 7:35 a.m., and could last up to seven hours.

Cassidy and Behnken will replace aging nickel-hydrogen batteries with new lithium-ion batteries delivered to the station on a Japanese cargo ship in May. The replacements will be on the starboard 6 truss’ 3B power channel.

During the July 16 spacewalk, they plan to remove five of six older nickel-hydrogen batteries for the truss’ power system and install three new lithium-ion batteries, as well as accompanying hardware. The last nickel-hydrogen battery will be removed from the truss and stowed on July 21, when Behnken and Cassidy venture out on the 300th spacewalk involving U.S. astronauts since Ed White stepped out of his Gemini 4 capsule on June 3, 1965.

In all, 12 spacewalks will have been performed since January 2017 to change out batteries for eight power channels used to route electricity on the station.

When the power upgrades are complete, the astronauts will shift gears and remove two lifting fixtures used for ground processing of the station’s solar arrays prior to their launch. They’ll also begin preparing the Tranquility module for the installation of a commercial airlock provided by NanoRacks and scheduled to arrive on a SpaceX cargo flight later this year. The airlock will be used to deploy commercial and government-sponsored experiments into space.

These will be the 230th and 231st spacewalks in the history of space station assembly, maintenance, and upgrades. They also will be the ninth and 10th for Cassidy and Behnken, who will join former NASA astronauts Michael Lopez-Alegria and Peggy Whitson with the most spacewalks by Americans.

Cassidy arrived at the space station in April, taking command of Expedition 63. Behnken, who is serving as a flight engineer for the expedition, arrived at the station in May with fellow Commercial Crew astronaut Douglas Hurley on SpaceX’s Crew Dragon Demo-2 test flight.

For almost 20 years, humans have lived and worked continuously aboard the International Space Station, advancing scientific knowledge and demonstrating new technologies, making research breakthroughs not possible on Earth that will enable long-duration human and robotic exploration into deep space. As a global endeavor, 239 people from 19 countries have visited the unique microgravity laboratory that has hosted more than 2,800 research investigations from researchers in 108 countries and areas.