A newly-discovered comet is giving skywatchers quite the show during the month of July. Early risers may have already caught a glimpse of the comet Neowise as it streaks across the sky, but don't worry — some of the best viewing moments have yet to come.

Astronomers discovered the comet, known as Comet C2020 F3 NEOWISE, back in March. It was named for the NASA mission that spotted it, for the Near-Earth Object Wide-field Infrared Survey Explorer.

The mission was tasked with finding as many near-Earth asteroids as possible, looking for ones that could be potentially hazardous to the planet. But astronomers knew they found something unique when they spotted Neowise.

On July 3, Neowise was closer to the sun than the orbit of Mercury, coming dangerously close to breaking apart. The sun heated up much of the comet's icy makeup, erupting in a large debris trail of gas and dust.

Measuring about 3 miles across, Neowise is considered a fairly large comet — providing skywatchers with a spectacular view from Earth. It's made up of material dating back to the origin of our solar system, 4.6 billion years ago, scientists said.

The event is truly a once-in-a-lifetime experience — the comet takes about 6,800 years to complete its path around the sun, according to NASA.

"In its discovery images, Comet NEOWISE appeared as a glowing, fuzzy dot moving across the sky even when it was still pretty far away," Amy Mainzer, principal investigator at the University of Arizona, said in a news release this week. "As soon as we saw how close it would come to the Sun, we had hopes that it would put on a good show." 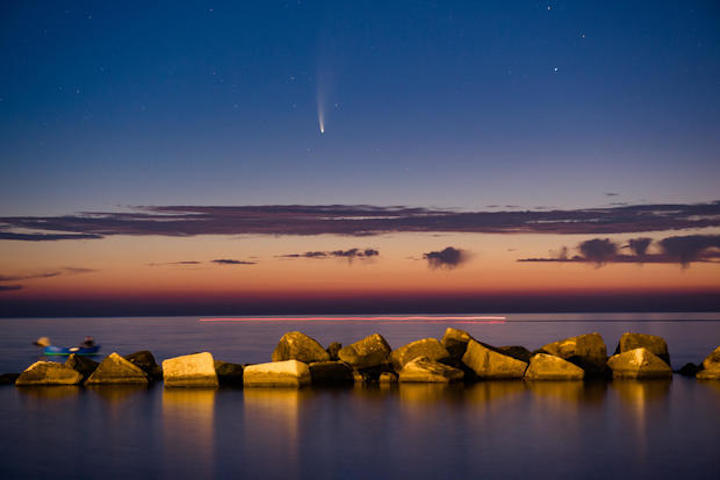 Comet Neowise shines at sunset above the Port of Molfetta in Molfetta on July 11, 2020.

How to see the comet

The comet, which has a bright opulent tail, has been putting on a stunning show in the early hours before sunrise in the Northern Hemisphere. Astrophotographers have captured breathtaking images of the comet, as have astronauts aboard the International Space Station.

But late sleepers need not worry — the comet will start appearing in the evening, just after sunset, starting Saturday. To view it, people in the Northern Hemisphere can look to the northwestern sky, just below Ursa Major, commonly known as the Big Dipper constellation.

Scientists say the comet will be visible across the Northern Hemisphere for about another month. In conditions with little light pollution, it may be visible with the naked eye, but NASA recommends using binoculars or a telescope to spot its long tail.

Newowise's closest approach to Earth comes on July 22, at a distance of about 64 million miles. NASA said it's "no Hale-Bopp," the spectacular comet of 1997, but it will be one of the brightest this century.

NASA added it will become even easier to view as July continues, for skywatchers with a clear view toward the horizon. The comet appears higher in the sky for observers farther north, while observers at lower latitudes will view it lower in the sky.

It will be about 7,000 years before the comet returns, so skywatchers shouldn't hesitate to seek out the natural fireworks display. 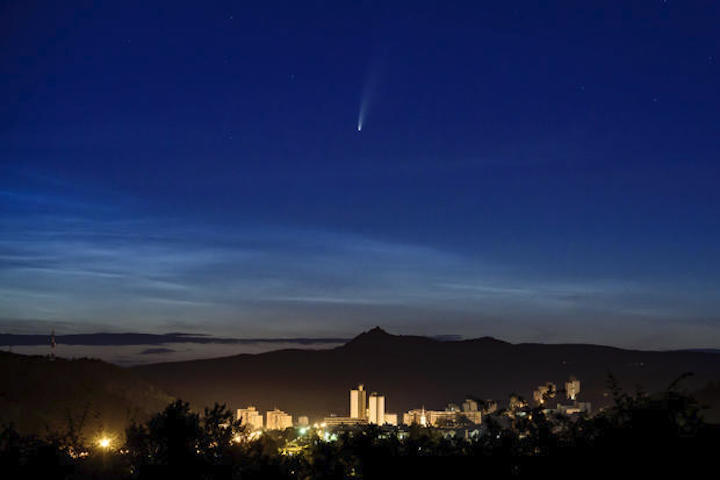 Spectacular photos capture Neowise, one of the brightest comets in decades

Neowise, one of the brightest comets in decades, has brought with it a stunning debris trail this month, delighting skywatchers around the world. Even astronauts aboard the International Space Station have captured the stunning celestial phenomenon, which promises to bring even more spectacular sightings as the month goes on.

During the month of July, the newly-discovered comet Neowise, formally named Comet C2020 F3 NEOWISE by NASA, has been visible in the early hours before sunrise. Early risers have captured already captured breathtaking images of the event.

The event is truly a once-in-a-lifetime experience — the comet takes about 6,800 years to complete its path around the sun, according to NASA. Starting this weekend, it will be visible to viewers in the Northern Hemisphere in the evening, just after sunset. 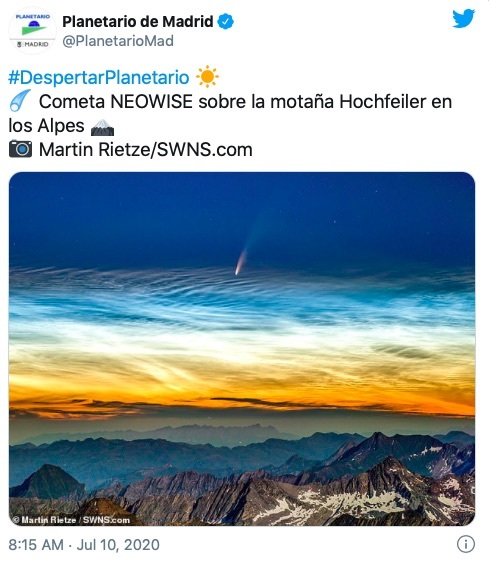