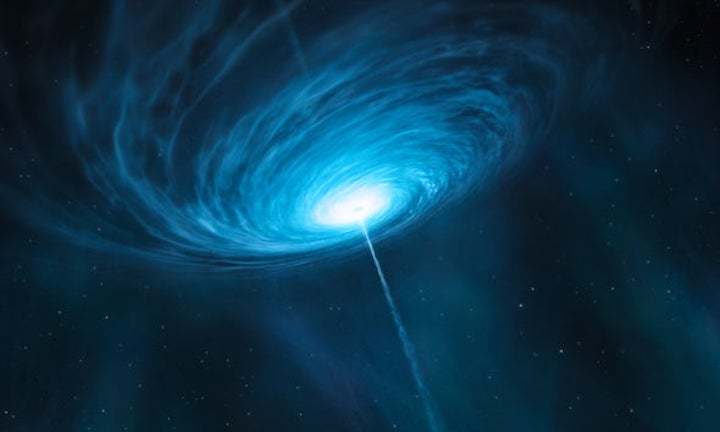 It is the greatest disappearing act in the universe. Quasars—luminous beacons powered by ravenous supermassive black holes at the cores of distant galaxies—have been caught vanishing, sometimes fading in less than a year. Afterward what seem to be standard, humdrum galaxies emerge from the diminished glare. Although astronomers have long known that any quasar will eventually become quiescent as its central black hole exhausts its feedstock of gas and dust, such objects are so immense in scale that the process should take tens of thousands of years. So how could it occur in less than a year?

Perhaps, it was suggested, dust clouds passing in front of the quasars temporarily blocked them from view. Maybe, some theorists argued, these oddballs were something else entirely: A supermassive black hole devouring a star could spark a suitably bright, brief outburst. Or a passing sun could act as a celestial magnifying glass, creating a flarelike amplification of light. But these ideas have largely been ruled out. Instead astronomers say the evidence shows the quasars themselves are changing. More precisely, some change in their accretion disk—that swirl of hot matter that encircles the feeding black hole—is the true culprit. Now a new preprint study, recently accepted for publication in the Proceedings of the National Academy of Sciences USA, adds fuel to that fire. California Institute of Technology astronomer Matthew Graham and his colleagues have nearly tripled the number of known “changing-look” quasars—all of which clearly display sweeping changes in their accretion disk. This is the largest sample of such quasars ever compiled, allowing astronomers to finally glimpse deeper details behind these mysterious changes, which, in turn, might help to better explain the mechanics of feeding black holes and the means by which galaxies such as the Milky Way evolve over cosmic time.

Since the discovery of the first known changing-look quasar in 2014, astronomers have chased down more of these oddballs—some of which appear to rapidly brighten as a galaxy suddenly flares into a luminous quasar. Here, too, the timescale had seemed impossible. So astronomers monitored these objects in every wavelength available. Recently, that approach has involved both visible and infrared light—two wavelengths that allow researchers to probe different aspects of the physical system. In a quasar, visible light mostly emanates from the accretion disk, whereas infrared light predominantly comes from a larger outlying torus—a doughnut-shaped ring of dust that envelops the accretion disk. Those dual overlapping observations revealed a notable new detail: changes in the visible light are echoed by changes in the infrared light. Because the bright accretion disk sends light toward the darker torus, where it is absorbed and reemitted at infrared wavelengths, the echo is conclusive evidence that some sort of rapid change is occurring within the accretion disk itself. “I would put a decent amount of money—maybe not my mortgage or my student loans—that raw accretion-rate changes are the favored explanation,” says says Nicholas Ross, a co-author of the new study and an astronomer at the University of Edinburgh in Scotland.

With that model in mind, Graham, Ross and their colleagues pored over data from the Catalina Sky Survey, which boasts decade-scale light curves (measures of brightness as a function of time) for roughly half a billion sources across the sky. First, the team sifted through the Catalina data for objects classified as quasars based on their spectra (the various colors of their emitted light). Second, it analyzed the visible light curves to find quasars that had dimmed over time, cross-referencing them against infrared light curves (using data from NASA’s Wide-Field Infrared Survey Explorer satellite) to see how each candidate’s dimming occurred across both types of light. Finally, the researchers looked at each object’s post-dimming spectrum again to verify that the object had morphed into a galaxy. Then they searched for galaxies that morphed into a quasar.

Overall, the team found 111 rapidly changing quasars to compliment the 60 or so already known. But more than merely adding entries to a catalogue, the new paper constitutes a robust reality check for an emerging model of the physical circumstances responsible for this enigmatic phenomenon. That achievement, argues Eric Morganson, an astronomer at the University of Illinois at Urbana-Champaign, who was not involved in the study, makes it a milestone. Every new curiosity in astronomy—even quasars themselves, which were discovered in the mid-20th century—first enters the field in a number of “gee-whiz” papers chiefly pointing out their oddity. Astronomers start with a few examples that leave them baffled. But as they systematically seek and find more, they also gain a deeper understanding, building better models of what they believe to be occurring. Eventually, the research crosses a threshold where the observations mostly just constrain existing models rather than giving rise to entirely new ones. This study marks that turning point, Morganson says.

In the new sample, every flagged quasar first displayed a change in visible light, followed by a change in infrared light. That is sufficient proof, the paper’s authors say, to conclude that the observed change is intrinsic to a quasar itself rather than being the result of some external event or force. As such, the team argues that instead of “changing-look,” these quasars would better be called “changing-state” to reflect the true nature of their origins.

Nomenclature aside, the crux of the mystery remains: How, exactly, can an entire quasar suddenly go dark? And how, exactly, can a galaxy suddenly brighten? Temperature changes in the accretion disk—induced, perhaps, by cold or hot fronts of gas, shifting magnetic fields or some combination thereof—are the researchers’ preferred explanation. Regardless of the root cause, their study also modeled what an accretion disk would have to be like for such changes to propagate through it so quickly. Specifically, the team found that a disk must be puffy and highly viscous to exhibit such speedy changes. “You can send a wave across molasses faster than you can send it across water,” says study co-author Kathleen E. Saavik Ford, an astronomer at the American Museum of Natural History (AMNH) in New York City and Borough of Manhattan Community College, City University of New York (BMCC). The same is true for a thicker, fluffier disk—something that looks more like a doughnut than a CD. “You can think of it, sort of, as a pipe,” Saavik Ford says. “You can transmit information faster through a fat pipe than you can through a skinny pipe.” So no matter what the change is, it likely requires a puffy and viscous disk.

That conclusion runs contrary to consensus scientific opinion, which has long held that such disks should be thin. But study co-author Barry McKernan, an astronomer at AMNH and BMCC, argues that the finding jibes with recent theoretical work showing that accretion disks could be quite thick.

Still, the exact mechanism at work in the case of the disappearing quasars remains unknown. John Ruan, an astronomer at McGill University, who was not involved in the study, argues that we might not need to pick just one mechanism in any case. One takeaway from all the newfound examples is their impressive diversity. Some appear to gradually change, while others flicker rapidly. “I would not be surprised at all if changing-look quasars are due to a variety of things,” he says.