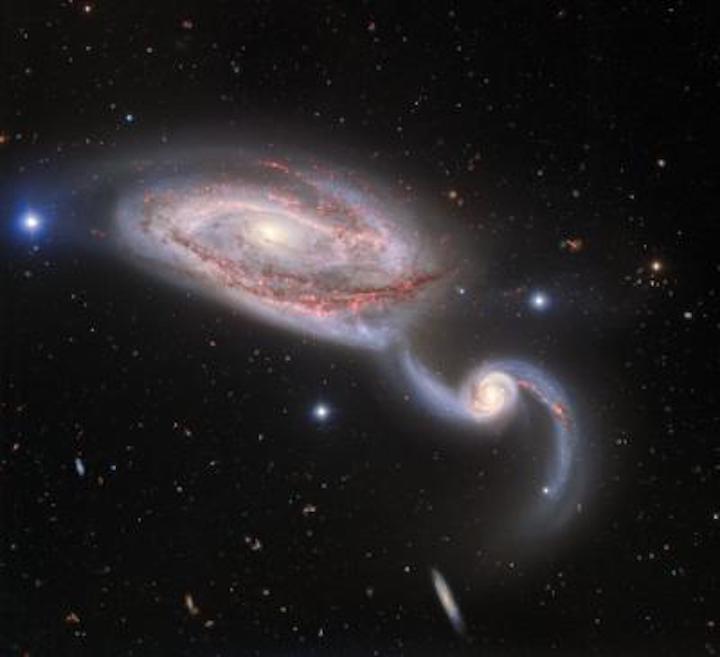 ASSOCIATION OF UNIVERSITIES FOR RESEARCH IN ASTRONOMY (AURA)

"Everything is determined by forces over which we have no control... Human beings, vegetables, or cosmic dust, we all dance to a mysterious tune, intoned in the distance by an invisible piper." -- Albert Einstein

Galaxies lead a graceful existence on cosmic timescales. Over millions of years, they can engage in elaborate dances that produce some of Nature's most exquisite and striking grand designs. Few are as captivating as the galactic duo known as NGC 5394/5, sometimes nicknamed the Heron Galaxy. This image, obtained by the Gemini Observatory of NSF's National Optical-Infrared Astronomy Research Laboratory, captures a snapshot of this compelling interacting pair.

The existence of our Universe is dependent upon interactions -- from the tiniest subatomic particles to the largest clusters of galaxies. At galactic scales, interactions can take millions of years to unfold, a process seen in this image of two galaxies released today by the Gemini Observatory. The new image captures the slow and intimate dance of a pair of galaxies some 160 million light-years distant and reveals the sparkle of subsequent star formation fueled by the pair's interactions.

The two galaxies, astronomers have concluded, have already "collided" at least once. However, galactic collisions can be a lengthy process of successive gravitational encounters, which over time can morph the galaxies into exotic, yet unrecognizable forms. These galaxies, as in all galactic collisions, are engaged in a ghostly dance as the distances between the stars in each galaxy preclude actual stellar collisions and their overall shapes are deformed only by each galaxy's gravity.

One byproduct of the turbulence caused by the interaction is the coalescence of hydrogen gas into regions of star formation. In this image, these stellar nurseries are revealed in the form of the reddish clumps scattered in a ring-like fashion in the larger galaxy (and a few in the smaller galaxy). Also visible is a dusty ring that is seen in silhouette against the backdrop of the larger galaxy. A similar ring structure is seen in this previous image from the Gemini Observatory, likely the result of another interacting galactic pair.

A well-known target for amateur astronomers, the light from NGC 5394/5 first piqued humanity's interest when it was observed by William Herschel in 1787. Herschel used his giant 20-foot-long telescope to discover the two galaxies in the same year that he discovered two moons of Uranus. Many stargazers today imagine the two galaxies as a Heron. In this interpretation, the larger galaxy is the bird's body and the smaller one is its head -- with its beak preying upon a fish-like background galaxy!