"Perseverance Valley," on the rim of Endurance Crater, includes wheel tracks from the Opportunity Mars rover's descent of the valley to investigate its origin. The rover's Pancam took component images in September and October of 2017 for this approximately true-color scene.
Credits: NASA/JPL-Caltech/Cornell Univ./Arizona State Univ. 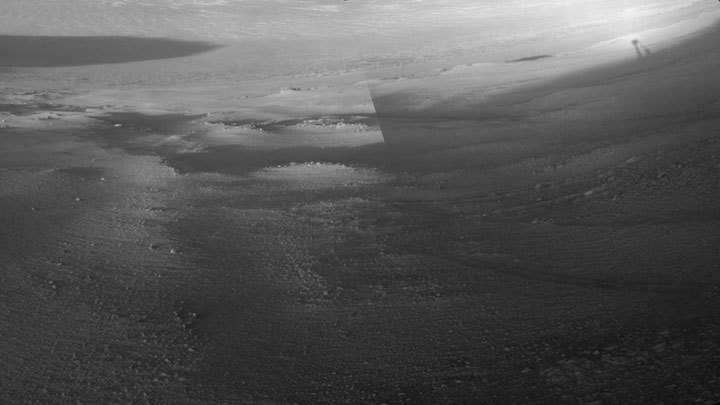 Late-afternoon shadows include one cast by the rover itself in this look toward the floor of Endeavour Crater by NASA's Mars Exploration Rover Opportunity. The rover's Navcam recorded the three component images on Nov. 11, 2017, about a week before Opportunity's eighth Martian winter solstice.
Credits: NASA/JPL-Caltech 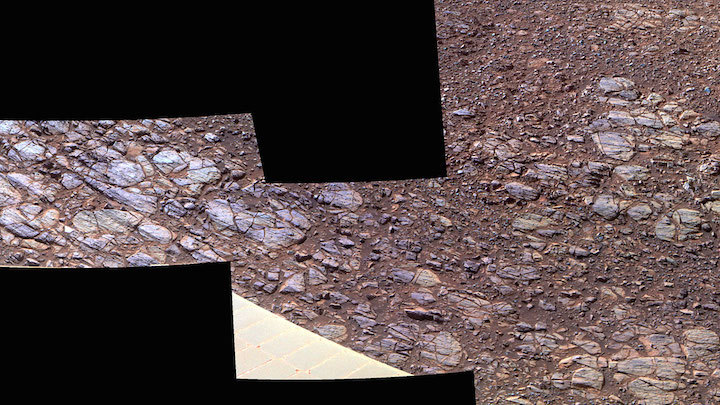 This enhanced-color view of ground sloping downward to the right in "Perseverance Valley" shows textures that may be due to abrasion by wind-driven sand. The Pancam on NASA's Mars rover Opportunity's imaged this scene in October 2017.
Credits: NASA/JPL-Caltech/Cornell Univ./Arizona State Univ.
Full image and caption

NASA's senior Mars rover, Opportunity, has just passed the shortest-daylight weeks of the long Martian year with its solar panels in encouragingly clean condition for entering a potential dust-storm season in 2018.

Before dust season will come the 14th Earth-year anniversaries of Mars landings by the twin rovers Spirit and Opportunity in January 2004. Their missions were scheduled to last 90 Martian days, or sols, equivalent to about three months.

"I didn't start working on this project until about Sol 300, and I was told not to get too settled in because Spirit and Opportunity probably wouldn't make it through that first Martian winter," recalls Jennifer Herman, power subsystem operations team lead for Opportunity at NASA's Jet Propulsion Laboratory in Pasadena, California. "Now, Opportunity has made it through the worst part of its eighth Martian winter."

The minimum-sunlight period for southern Mars this year was in October and November. Mars takes 1.88 Earth years to orbit the Sun and, like Earth, it has a tilted axis, so it gets seasons resembling Earth's but nearly twice as long.

Both Opportunity and Spirit are in Mars' southern hemisphere, where the Sun appears in the northern sky during fall and winter, so solar-array output is enhanced by tilting the rover northward. Spirit could not maintain enough energy to survive through its fourth Martian winter, in 2009, after losing use of two wheels, long past their planned lifetime. It became unable to maneuver out of a sand trap to the favorable northward tilt.

Opportunity's current exploration of fluid-carved "Perseverance Valley" positioned it well for working productively through late fall and early winter this year. The rover has used stops at energy-favorable locations to inspect local rocks, examine the valley's shape and image the surroundings from inside the valley.

The valley runs downhill eastward on the inner slope of the western rim of Endurance Crater, which is 14 miles (22 kilometers) in diameter. Since entering the top of the valley five months ago, Opportunity's stops between drives have been at north-facing sites, on the south edge of the channel. The rover team calls the sites "lily pads" and plans routes from each one safely to the next, like a frog hopping from lily pad to lily pad.

Herman's role includes advising others on the team how much energy is available each sol for activities such as science observations and driving. "Relying on solar energy for Opportunity keeps us constantly aware of the season on Mars and the terrain that the rover is on, more than for Curiosity," she said. She performs the same role for NASA's younger Mars rover, Curiosity, which gets its electrical energy from a radioisotope thermoelectric generator instead of solar panels. Wintertime conditions affect use of electrical heaters and batteries on both rovers, but influence Opportunity's activities much more than Curiosity's.

Opportunity has not always been on such suitable terrain for winter operations. In its fifth winter, in 2011-2012, it spent 19 weeks at one spotbecause no other places with favorable tilt were within acceptable driving distance. In contrast, it kept busy its first winter in the southern half of a stadium-size crater, where all of the ground faced north.

Besides tilt and daylight length, other factors in Opportunity's power status include how much dust is on the solar array and in the sky. Wind can clean some dust off the array, but can also stir up dust storms that block sunlight and then drop dust onto the rover. Southern-hemisphere autumn and winter tend to have clear skies over Opportunity, but the amount of dust on the solar array going into autumn has varied year-to-year, and this year the array was dustier than in all but one of the preceding autumns.

"We were worried that the dust accumulation this winter would be similar to some of the worst winters we've had, and that we might come out of the winter with a very dusty array, but we've had some recent dust cleaning that was nice to see," Herman said. "Now I'm more optimistic. If Opportunity's solar arrays keep getting cleaned as they have recently, she'll be in a good position to survive a major dust storm. It’s been more than 10 Earth years since the last one and we need to be vigilant."

Planet-encircling dust storms are most likely in southern spring and summer on Mars, though these storms don't happen every Martian year. The latest such storm, in 2007, sharply reduced available sunlight for Spirit and Opportunity, prompting emergency cutbacks in operations and communications to save energy. Some atmospheric scientists anticipate that Mars may get its next planet-encircling dust storm in 2018.

In coming months, scientists and engineers plan to continue using Opportunity to investigate how Perseverance Valley was cut into the crater rim. "We have not been seeing anything screamingly diagnostic, in the valley itself, about how much water was involved in the flow," said Opportunity Project Scientist Matt Golombek, of JPL. "We may get good diagnostic clues from the deposits at the bottom of the valley, but we don't want to be there yet, because that's level ground with no more lily pads."