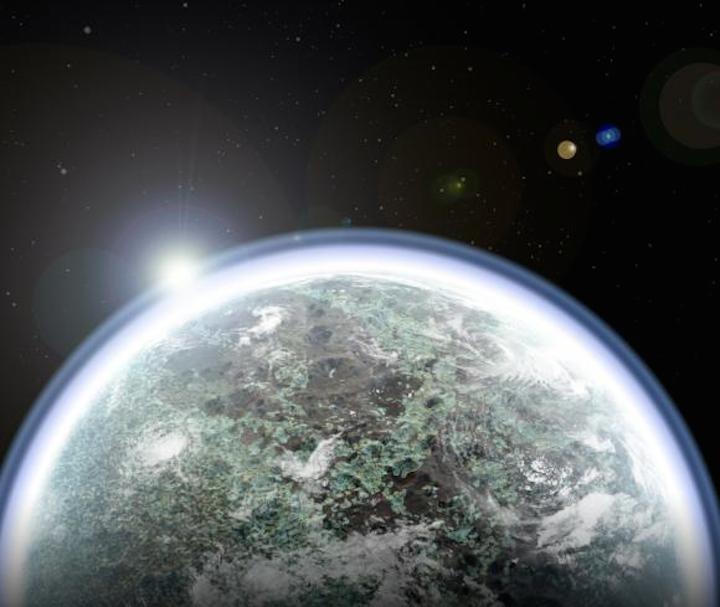 Primordial atmosphereMars may have been enveloped in a thick, steamy atmosphere as the planet's crust cooled and solidified. That steam bath could have created the clay minerals that have long been attributed to water flow on or just beneath the surface.

New research suggests that the bulk of clay minerals on Mars could have been formed as the planet’s crust cooled and solidified, not by later interactions with water on the surface as has long been assumed.

PROVIDENCE, R.I. [Brown University] — Planetary scientists from Brown University have proposed a new scenario for the formation of ancient clay minerals on Mars that, if shown to be true, could rewrite the early history of the red planet.

There are thousands of ancient phyllosilicate outcrops on the Martian surface. Phyllosilicates, or clays, are formed by the interaction of water with volcanic rock, leading many scientists to conclude that there must have been sustained surface water, groundwater or active hydrothermal systems at some point in Martian history. But the new research, published in the journal Nature, suggests that the clays may have formed during the creation of the Martian crust itself, long before any water flowed on the planet.

Backed by lab experiments and computer models, the researchers lay out how the scenario would have worked. In the very early solar system, Mars and other rocky planets are thought to have been covered by oceans of molten magma. As the Mars magma ocean began to cool and solidify, water and other dissolved volatiles would be outgassed to the surface, forming a thick, steamy atmosphere surrounding the planet. The moisture and heat from that high-pressure steam bath would have converted vast swaths of the newly solidified surface to clay. As the planet then evolved over billions of years, volcanic activity and asteroid bombardments would have covered the clays in some places and excavated them in others, leading to the widespread but patchy distribution seen on the surface today.

“The basic recipe for making clay is you take rock and you add heat and water,” said Kevin Cannon, a postdoctoral researcher at the University of Central Florida who led the research while completing his Ph.D. at Brown. “This primordial atmosphere created by a magma ocean would have been the hottest and wettest Mars ever was. It’s a situation where you could pervasively alter the crust and then just shuffle those materials around afterward.”

Cannon and his co-authors say the scenario offers a means of creating widespread clay deposits that doesn’t require a warm and wet climate or a sustained hydrothermal system on early Mars. State-of-the-art climate models suggest an early Mars where the temperature rarely crept above freezing and where water flow on the surface was sporadic and isolated.

“One of the complications that comes up in Mars evolution is that we can’t create a scenario where surface weathering had the capacity to produce the extent of mineral alteration that we see,” said Jack Mustard, a professor in Brown’s Department of Earth, Environmental and Planetary Sciences and study co-author. “We’re certainly not trying to discount other alteration mechanisms entirely. Surface weathering and other types of alteration surely occurred at different points in Martian history, but we think this is a plausible way to explain much of the widespread clay we see in the oldest Martian terrains.”

To demonstrate that the mechanism they propose is plausible, the researchers synthesized rock samples matching the composition of Martian basalt. They then used a high-pressure device to recreate temperature and pressure conditions the may have been present amid the steam atmosphere created by a magma ocean. After cooking samples for two weeks, the team checked to see if they had been altered and to what extent.

“It was really remarkable how quickly and extensively this basalt was altered,” Cannon said. “At the highest temperatures and pressures, it ate completely through the basalt particles. It’s a really intense degree of alteration.”

The steam atmosphere associated with a magma ocean could have survived for as long as 10 million years or more, Cannon and his colleagues say. That would have been long enough, they estimate, to create as much as three kilometers of clay on the primordial Martian surface.

To get an idea what the fate of that clay might be as the planet evolved, the researchers created a computer model to simulate a slab of Martian crust with a three-kilometer clay layer on top. Then they simulated the first billion years of Martian geologic history — the period when volcanic activity and asteroid bombardment were most prevalent. The model showed that the burial, excavation and scattering of clays over time created distribution of exposed deposits similar to what’s seen on Mars today.

“To put some numbers on it, clays cover about 3 percent of the oldest crust exposures on Mars,” Cannon said. “We’re finding about that same order of magnitude in these models.”

The lab experiments and simulations can’t say for certain that this scenario occurred, the researchers say, but they do suggest a strong hypothesis that could be tested during future Mars exploration.

“One of the things I like about this is that it’s truly testable,” said Steve Parman, a geology professor at Brown and co-author of the study. “With a returned sample, or maybe even with the analytical equipment on a rover, I’m optimistic that you could distinguish this primordial process from some other alteration process.”

If the process did indeed occur, it could have some interesting implications for early Martian history. In addition to providing a mechanism for clay formation even if Mars was as cold and icy as climate models suggest, the scenario suggests that vast deposits of clay were — and might still be — present beneath the surface. Those deposits could explain why the Martian crust is less dense than expected for a basaltic crust, the researchers say. The deposits would also serve as large underground storage reservoirs for water.

“There potentially would have been quite a lot of water locked up in these buried clays,” Parman said. “You could imagine that if those deposits were heated up by magmatism or some other process they would have released that water, perhaps providing a transient water supply to the surface. That could have implications for past habitability.”

Mustard, who chaired the committee that laid out the science goals for NASA’s Mars 2020 rover, hopes this new hypothesis could inform future Martian exploration.

“This would be a really interesting hypothesis to test,” he said. “Depending on where the rover ultimately lands, I think we could get the right samples to illuminate these questions.”