Jupiter's moon Europa could have subduction zones, a new study shows, which could supply chemical food for life to a subsurface ocean. 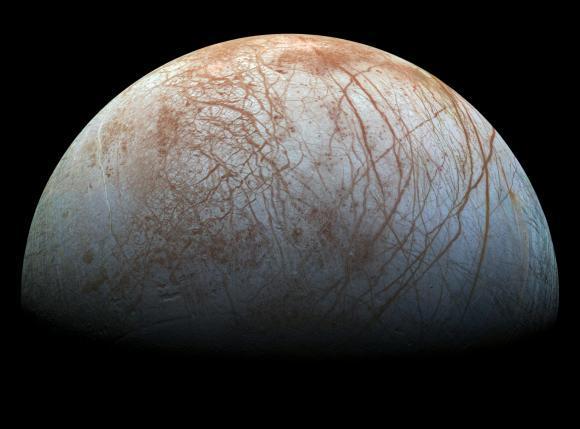 WASHINGTON D.C. -- A recent study provides new evidence that the icy shell of Jupiter's moon Europa may have plate tectonics similar to those on Earth. The presence of plate tectonic activity could have important implications for the possibility of life in the ocean thought to exist beneath the moon's surface.

The new study, published in the Journal of Geophysical Research: Planets, a journal of the American Geophysical Union, uses computer modeling to show that subduction -- when a tectonic plate slides underneath another and sinks deep into a planet's interior -- is physically possible in Europa's ice shell. The findings bolster earlier studies of Europa's surface geology that found regions where the moon's ice shell looks to be expanding in a way that's similar to the mid-ocean spreading ridges on Earth. The possibility of subduction adds another piece to the tectonic puzzle.

"We have this evidence of extension and spreading, so the question becomes where does that material go?" said Brandon Johnson, an assistant professor at Brown University's Department of Earth, Environmental and Planetary Sciences and a lead author of the study. "On Earth, the answer is subduction zones. What we show is that under reasonable assumptions for conditions on Europa, subduction could be happening there as well, which is really exciting."

Part of the excitement, Johnson says, is that surface crust is enriched with oxidants and other chemical food for life. Subduction provides a means for that food to come into contact with the subsurface ocean scientists think probably exists under Europa's ice.

"If indeed there's life in that ocean, subduction offers a way to supply the nutrients it would need," Johnson said.

On Earth, subduction is driven largely by differences in temperature between a descending slab and the surrounding mantle. Crustal material is much cooler than mantle material, and therefore denser. That increased density provides the negative buoyancy needed to sink a slab deep into the mantle.

Though previous geological studies had hinted that something like subduction could be happening on Europa, it wasn't clear exactly how that process would work on an icy world. There's evidence, Johnson says, that Europa's ice shell has two layers: a thin outer lid of very cold ice that sits atop a layer of slightly warmer, convecting ice. If a plate from the outer ice lid was pushed down into the warmer ice below, its temperature would quickly warm to that of the surrounding ice. At the point, the slab would have the same density of the surrounding ice and would therefore stop descending.

But the model developed by Johnson and his colleagues showed a way that subduction could happen on Europa, regardless of temperature differences. The model showed that if there were varying amounts of salt in the surface ice shell, it could provide the necessary density differences for a slab to subduct.

"Adding salt to an ice slab would be like adding little weights to it because salt is denser than ice," Johnson said. "So rather than temperature, we show that differences in the salt content of the ice could enable subduction to happen on Europa."

And there's good reason to suspect that variations in salt content do exist on Europa. There's geological evidence for occasional water upwelling from Europa's subsurface ocean -- a process similar to the upwelling of magma from Earth's mantle. That upwelling would leave high salt content in the crust under which it rises. There's also a possibility of cryovolcanism, where salty ocean contents actually spray out onto the surface.

In addition to bolstering the case for a habitable ocean on Europa, Johnson says, the research also suggests a new place in the solar system to study a process that's played a crucial role in the evolution of our own planet.

"It's fascinating to think that we might have plate tectonics somewhere other than Earth," he said. "Thinking from the standpoint of comparative planetology, if we can now study plate tectonics in this very different place, it might be able to help us understand how plate tectonics got started on the Earth."

Johnson's co-authors on the paper -- Rachel Sheppard, Alyssa Pascuzzo, Elizabeth Fisher and Sean Wiggins -- are all graduate students at Brown University. They took a class Johnson offered called Ocean Worlds, which focused on bodies like Europa that are thought to have oceans beneath icy shells.

"This paper emerged as a class project we did together," Johnson said, "and it's exciting that we came up with some interesting results."

The American Geophysical Union is dedicated to advancing the Earth and space sciences for the benefit of humanity through its scholarly publications, conferences, and outreach programs. AGU is a not-for-profit, professional, scientific organization representing 60,000 members in 137 countries. Join the conversation on Facebook, Twitter, YouTube, and our other social media channels.