The intensive, worldwide search for dark matter, the missing mass in the universe, has so far failed to find an abundance of dark, massive stars or scads of strange new weakly interacting particles, but a new candidate is slowly gaining followers and observational support.

Fundamental structures of a pion (left) and a proposed SIMP (strongly interacting massive particle). Pions are composed of an up quark and a down antiquark, with a gluon (g) holding them together. A SIMP would be composed of a quark and an antiquark held together by an unknown type of gluon (G).

Called SIMPs – strongly interacting massive particles – they were proposed three years ago by UC Berkeley theoretical physicist Hitoshi Murayama, a professor of physics and director of the Kavli Institute for the Physics and Mathematics of the Universe (Kavli IPMU) in Japan, and former UC Berkeley postdoc Yonit Hochberg, now at Hebrew University in Israel.

Murayama says that recent observations of a nearby galactic pile-up could be evidence for the existence of SIMPs, and he anticipates that future particle physics experiments will discover one of them.

Murayama discussed his latest theoretical ideas about SIMPs and how the colliding galaxies support the theory in an invited talk Dec. 4 at the 29th Texas Symposium on Relativistic Astrophysics in Cape Town, South Africa.

Theorists first thought that this invisible matter was just normal matter too dim to see: failed stars called brown dwarfs, burned-out stars or black holes. Yet so-called massive compact halo objects – MACHOs – eluded discovery, and earlier this year a survey of the Andromeda galaxy by the Subaru Telescope basically ruled out any significant undiscovered population of black holes. The researchers searched for black holes left over from the very early universe, so-called primordial black holes, by looking for sudden brightenings produced when they pass in front of background stars and act like a weak lens. They found exactly one – too few to contribute significantly to the mass of the galaxy. 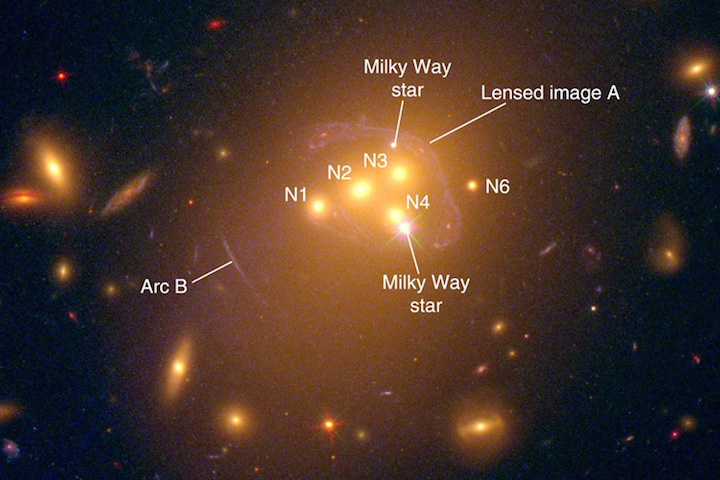 This Hubble Space Telescope image of the galaxy cluster Abell 3827 shows the ongoing collision of four bright galaxies and one faint central galaxy, as well as foreground stars in our Milky Way galaxy and galaxies behind the cluster (Arc B and Lensed image A) that are distorted because of normal and dark matter within the cluster. SIMPs could explain why the dark matter, unseen but detectable because of the lensing, lags behind the normal matter in the collision.

“That study pretty much eliminated the possibility of MACHOs; I would say it is pretty much gone,” Murayama said.

WIMPs — weakly interacting massive particles — have fared no better, despite being the focus of researchers’ attention for several decades. They should be relatively large – about 100 times heavier than the proton – and interact so rarely with one another that they are termed “weakly” interacting. They were thought to interact more frequently with normal matter through gravity, helping to attract normal matter into clumps that grow into galaxies and eventually spawn stars.

SIMPs interact with themselves, but not others

SIMPs, like WIMPs and MACHOs, theoretically would have been produced in large quantities early in the history of the universe and since have cooled to the average cosmic temperature. But unlike WIMPs, SIMPs are theorized to interact strongly with themselves via gravity but very weakly with normal matter. One possibility proposed by Murayama is that a SIMP is a new combination of quarks, which are the fundamental components of particles like the proton and neutron, called baryons. Whereas protons and neutrons are composed of three quarks, a SIMP would be more like a pion in containing only two: a quark and an antiquark. 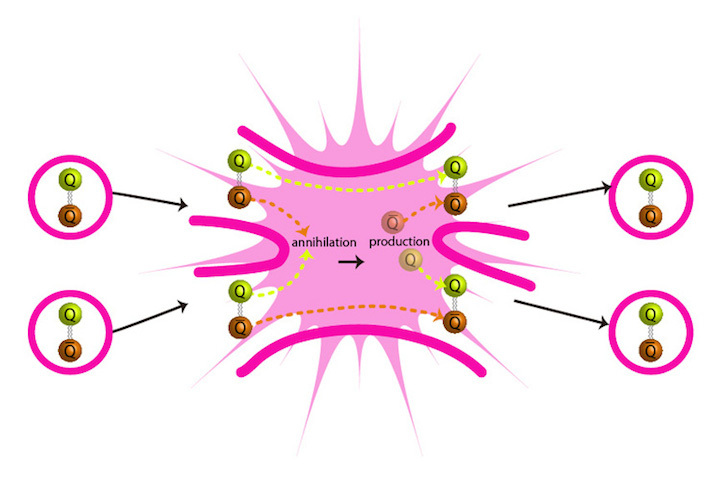 The SIMP would be smaller than a WIMP, with a size or cross section like that of an atomic nucleus, which implies there are more of them than there would be WIMPs. Larger numbers would mean that, despite their weak interaction with normal matter – primarily by scattering off of it, as opposed to merging with or decaying into normal matter – they would still leave a fingerprint on normal matter, Murayama said.

He sees such a fingerprint in four colliding galaxies within the Abell 3827 cluster, where, surprisingly, the dark matter appears to lag behind the visible matter. This could be explained, he said, by interactions between the dark matter in each galaxy that slows down the merger of dark matter but not that of normal matter, basically stars.

“One way to understand why the dark matter is lagging behind the luminous matter is that the dark matter particles actually have finite size, they scatter against each other, so when they want to move toward the rest of the system they get pushed back,” Murayama said. “This would explain the observation. That is the kind of thing predicted by my theory of dark matter being a bound state of new kind of quarks.”

SIMPs also overcome a major failing of WIMP theory: the ability to explain the distribution of dark matter in small galaxies. 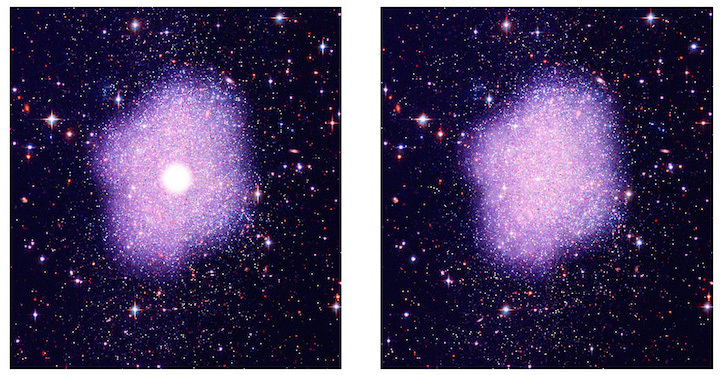 “There has been this longstanding puzzle: If you look at dwarf galaxies, which are very small with rather few stars, they are really dominated by dark matter. And if you go through numerical simulations of how dark matter clumps together, they always predict that there is a huge concentration towards the center. A cusp,” Murayama said. “But observations seem to suggest that concentration is flatter: a core instead of a cusp. The core/cusp problem has been considered one of the major issues with dark matter that doesn’t interact other than by gravity. But if dark matter has a finite size, like a SIMP, the particles can go ‘clink’ and disperse themselves, and that would actually flatten out the mass profile toward the center. That is another piece of ‘evidence’ for this kind of theoretical idea.”

Ongoing searches for WIMPs and axions

Ground-based experiments to look for SIMPs are being planned, mostly at accelerators like the Large Hadron Collider at CERN in Geneva, where physicists are always looking for unknown particles that fit new predictions. Another experiment at the planned International Linear Collider in Japan could also be used to look for SIMPs.

As Murayama and his colleagues refine the theory of SIMPs and look for ways to find them, the search for WIMPs continues. The Large Underground Xenon (LUX) dark matter experiment in an underground mine in South Dakota has set stringent limits on what a WIMP can look like, and an upgraded experiment called LZ will push those limits further. Daniel McKinsey, a UC Berkeley professor of physics, is one of the co-spokespersons for this experiment, working closely with Lawrence Berkeley National Laboratory, where Murayama is a faculty senior scientist.

Physicists are also seeking other dark matter candidates that are not WIMPs. UC Berkeley faculty are involved in two experiments looking for a hypothetical particle called an axion, which may fit the requirements for dark matter. The Cosmic Axion Spin-Precession Experiment (CASPEr), led by Dmitry Budker, a professor emeritus of physics who is now at the University of Mainz in Germany, and theoretician Surjeet Rajendran, a UC Berkeley professor of physics, is planning to look for perturbations in nuclear spin caused by an axion field. Karl van Bibber, a professor of nuclear engineering, plays a key role in the Axion Dark Matter eXperiment – High Frequency (ADMX-HF), which seeks to detect axions inside a microwave cavity within a strong magnetic field as they convert to photons.

“Of course we shouldn’t abandon looking for WIMPs,” Murayama said, “but the experimental limits are getting really, really important. Once you get to the level of measurement, where we will be in the near future, even neutrinos end up being the background to the experiment, which is unimaginable.”

Neutrinos interact so rarely with normal matter that an estimated 100 trillion fly through our bodies every second without our noticing, something that makes them extremely difficult to detect.

“The community consensus is kind of, we don’t know how far we need to go, but at least we need to get down to this level,” he added. “But because there are definitely no signs of WIMPs appearing, people are starting to think more broadly these days. Let’s stop and think about it again.”

Astronomie - MACHOs are dead. WIMPs are a no-show. Say hello to SIMPs.
1604 Views
Created with page4