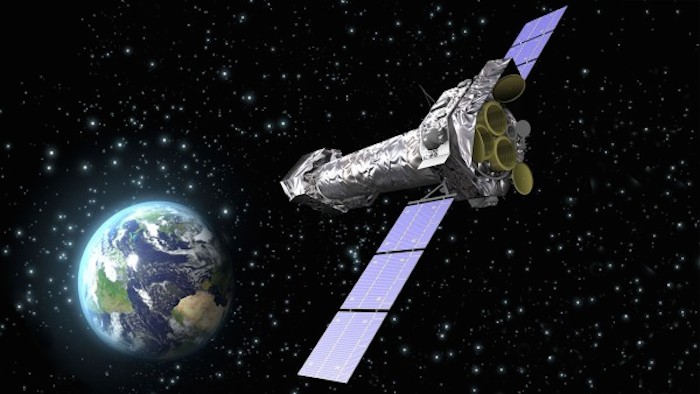 For years, high-energy radiation from space has been teasing scientists with inconclusive hints of dark matter. But a definitive answer may be at hand. A team of physicists says that certain galactic x-rays could be a sign of decaying dark matter, and that an upcoming satellite mission should prove or disprove their claim.
Dark matter makes up about 80% of matter in the universe, but no one knows exactly what it is. Most theorists suspect it consists of so-called weakly interacting massive particles (WIMPs)—undiscovered subatomic particles that give off so little light that we can’t see them, though they still interact with other matter through gravity and the weak nuclear force. But laboratory experiments haven’t spotted them, and the most likely evidence from space—gamma rays that putative WIMPs would give off while annihilating one another in the centers of galaxies—are swamped by cascades of gamma rays from other sources such as hot gas.
Particle physicist Alexey Boyarsky of Leiden University in the Netherlands and colleagues went after a different quarry. They scoured data from the European Space Agency's XMM-Newton orbiting x-ray observatory, for signs of particles weighing a few thousand electron-volts—a millionth as massive as WIMPs. In theory, particles like that—if they exist—should decay inside galactic centers and other objects in space to produce x-rays with a certain energy. The group started its search in 2005 and for years remained empty-handed. But they finally got lucky: Last year they reported finding a peak at 3.5 thousand electron-volts (keV) in the x-ray energy spectrum from both the Milky Way’s nearest neighbor, the Andromeda Galaxy, and the Perseus galaxy cluster. At the same time, another group—physicist Esra Bulbul of the Harvard-Smithsonian Center for Astrophysics in Cambridge, Massachusetts, and colleagues—reported finding an emission line at about 3.5 keV in the combined spectra from 73 galaxy clusters.
Now, in a paper accepted for publication in Physical Review Letters, Boyarsky's group reports a similar peak in x-rays from the core of the Milky Way. The intensity of the peak lies in the right range to be produced by dark matter reactions, the researchers say: higher than a lower limit inferred from the galaxy cluster data, but lower than a ceiling calculated from studies of the Milky Way's less dense outer regions. "We can't prove that dark matter is coming from the center of the Milky Way because we don't know the physics around the galactic center well enough," Boyarsky says. "But the signal passes a very nontrivial consistency check."
Other researchers, however, dispute the signal's dark matter origin. Physicists Tesla Jeltema and Stefano Profumo at the University of California, Santa Cruz, have analyzed the x-rays given off by ordinary atoms inside the Milky Way, Andromeda, and the relevant galaxy clusters. They conclude that the 3.5-keV line could easily come from hot, glowing potassium and other elements blasted into space by stars.
Meanwhile, physicist Ondrej Urban of the Kavli Institute for Particle Astrophysics and Cosmology at Stanford University in Palo Alto, California, and colleagues say data from the NASA/Japanese space agency (JAXA) Suzaku x-ray satellite show no real evidence of dark matter–like emission at 3.5 keV in the spectra of four galaxy clusters, including Perseus.
Boyarsky says more data are needed to settle the question. He and his colleagues have booked observing time on XMM-Newton to study the x-ray spectrum of a dwarf galaxy thought to harbor lots of dark matter but few chemical elements. "If we see the signal there, it would be very hard to interpret it in terms of normal astrophysics," he says. "That would constitute very solid proof of dark matter." He says he hopes to have results by early next year.
The ultimate test could also start next year, when JAXA is scheduled launch a new x-ray satellite called ASTRO-H. ASTRO-H will be able to plot the shape of the 3.5-keV peak in much more detail than current satellites can, says Jonathan Feng, a particle theorist at the University of California, Irvine. A relatively broad line, he explains, would imply that the x-rays are due to dark matter, whereas a narrower line would point to normal atoms as the source. "The 3.5-keV x-ray signal has a real chance of being definitively confirmed as dark matter in a few years, unlike other putative signals currently on the market.”
If dark matter is the cause, physicists will still need to pin down its identity. Feng says the energy and intensity of the 3.5-keV line are "just as would be expected" from sterile neutrinos: hypothetical ultraelusive cousins of ordinary neutrinos that would give off x-rays when decaying into normal neutrinos.
Cosmologist Kevork Abazajian, also at the University of California, Irvine, agrees that sterile neutrinos are the most likely candidate, in part because they arise in natural explanations for the existence of neutrino mass. But other hypothetical particles could also produce the signal, he adds. Ground-based measurements of β-decay—the same radioactive process that gave physicists their first hints that neutrinos exist—could settle whether keV-scale sterile neutrinos are also part of nature’s lineup, Abazajian suggests.
Quelle: AAAS
Astronomie
« Zum vorherigen Eintrag Zum nächsten Eintrag »
3419 Views
Created with page4