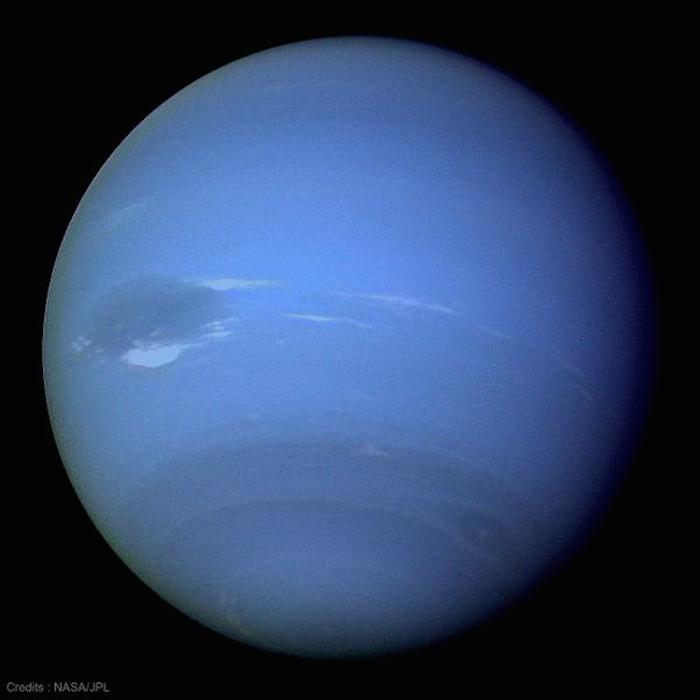 169 YEARS AGO: THE PLANET NEPTUNE
It happened one September 23. The German astronomer Johann Galle observed in the sky in 1846 the 8th planet in the solar system whose existence was revealed a few days earlier by the calculations of a French: Urbain Le Verrier.
We now know that the planet Neptune orbits the Sun at a distance of about 30 AU *, making it the eighth planet of the solar system. It makes a complete tour of the star of the day 164.79 years. It's a giant ice 17 times more massive than the Earth.
In 1846, it is the first time a star is discovered through the theory before being observed through a telescope. After 2 years of frantic calculations on the trajectory and characteristics of Uranus (the seventh planet of the solar system), the French astronomer Urbain Le Verrier mathematically predicted the existence and exact position of an eighth planet "disruptive" . These results lead the German astronomer Johann Gottfried Galle, assisted by compatriot Heinrich Louis d'Arrest, to be observed on the night of September 23 to 24, 1846 (with the Berlin Observatory) the new planet at least a degree of the theoretical position determined by Le Verrier few days earlier.
It will be called time "the outer planet Uranus" or "Le Verrier's planet" and "Neptune", name proposed by Le Verrier himself some time later in reference to the Roman god of the sea.
Uranus photographed by the American probe Voyager-2 14 August 1989. Credits: NASA / JPL.
* 1 AU (Astronomical Unit) = 149,597,871 km.
Quelle: CNES
Astronomie
« Zum vorherigen Eintrag Zum nächsten Eintrag »
2980 Views
Created with page4