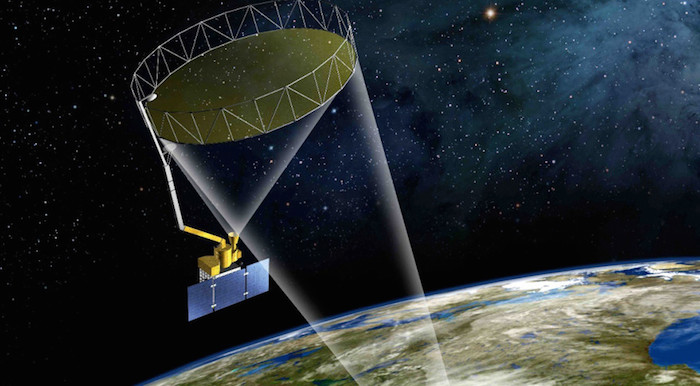 Software tweaks and aid from other satellites might help NASA's Soil Moisture Active Passive (SMAP) mission gather at least some of the data it was designed to get, despite the loss of its primary radar. Credit: NASA
WASHINGTON — Despite the July failure of the radar on NASA’s Soil Moisture Active Passive (SMAP) satellite, scientists hope to salvage the $1 billion mission by enhancing data from its other sensor and perhaps by coordinating its measurements with those taken by other spacecraft.
NASA officials acknowledged shortly after abandoning efforts to save the high-resolution radar that its loss means the mission cannot meet the scientific objectives that drove its design. But SMAP’s other sensor, a passive radiometer that measures temperatures on Earth’s surface, can do more than previously thought, and the spacecraft remains healthy, scientists say.
“It is hard to deny that the end of the radar operation is a big deal, but it is certainly not the end of the mission and it does not at all mean the loss of mission science,” Mahta Moghaddam, a professor in the Department of Electrical Engineering at the University of Southern California and a member of the SMAP science team, wrote in a Sept. 23 email.
The combined measurements of SMAP’s radar and radiometer were supposed to yield high-accuracy global maps of soil moisture levels at spatial resolutions of 9 kilometers, and soil freeze/thaw-state maps at 3-kilometer resolution. These measurements, endorsed by the National Research Council as a top NASA priority, were expected to increase scientists’ understanding of climate change processes including the carbon cycle.
SMAP’s radiometer provides more-accurate moisture measurements than the radar but its spatial resolution, at 40 kilometers, is much lower. Moreover, scientists expected to rely almost exclusively on the active, ground-penetrating radar for the freeze/thaw-state measurements.
But NASA has been working on tweaks to the algorithms — step-by-step instructions for software — that process SMAP radiometer data in hopes of replicating the freeze/thaw-state product the radar would have produced.
“The radiometer now literally can save the mission,” Steven Running, a professor at the Department of Ecosystem and Conservation Sciences at the University of Montana in Missoula, wrote in a Sept. 23 email. He nonetheless acknowledged that “some loss of accuracy” is to be expected in a radiometer-only freeze/thaw product because “the passive radiometer is receiving emissions effectively from the surface only,” whereas the radar would have made measurements a few centimeters deep into the soil.
Although software fixes provide some relief, the only sure way to replace the lost SMAP L-band radar data would be with radar data gathered by other satellites, Moghaddam said. There, options are limited.
Data from the L-band radar on the Japanese Aerospace Exploration Agency’s Daichi-2 satellite, which launched in May 2014, are a prime candidate to replace SMAP radar images, but “the data policy is restrictive; continuous and/or global data sets are not accessible to us here in the U.S.,” Moghaddam said.
The C-band radar on Europe’s Sentinel-1A, which launched in April 2014, could also fill in for SMAP’s failed radar. Sentinel-1A “has an open data policy for the most part, and save for its reduced sensitivity to soil moisture under vegetation, it may possibly be used to remedy some of the SMAP radar loss,” Moghaddam said.
While hopeful of meeting at least some of SMAP’s scientific objectives, Running said there are some investigations that simply will not be possible following the loss of the radar, which NASA has attributed to a low-voltage power supply to the sensor’s high-power amplifier.
“There were plans to explore how well the L-band radar could measure vegetation structure, such as forest density, which are now lost,” said Running, who is also chairman of the NASA Advisory Council’s Earth Science subcommittee. “Also some exploration of detecting seasonal changes in canopy water content with an active L-band retrieval was going to be new, but is now not possible.”
Meanwhile, separate investigations into the radar failure are ongoing at NASA Headquarters here, and at the Jet Propulsion Laboratory in Pasadena, California, where SMAP and its radar were designed and built.
Tina Panontin, chief engineer at NASA’s Ames Research Center in Mountain View, California, is in charge of the headquarters-led review team, which is expected to complete its work and issue a report before the end of the year, NASA spokesman Stephen Cole wrote in a Sept. 25 email.
Since announcing the radar’s failure, NASA has shed no new light on its cause other than to say the components involved were based on designs that have flown before, albeit not in the SMAP configuration.
Michael Freilich, director of NASA’s Earth Science Division, said in late July ­— after the radar stopped working but before NASA gave up on fixing it — that the agency made a conscious decision not to build redundancy into the components.
In a July 27 presentation to the NASA Advisory Council’s science committee, Freilich said JPL engineers decided against a redundant high-power amplifier because “the additional complexity of putting in switches to make it redundant would actually decrease the overall reliability of the instrument.”
Quelle: SN
Raumfahrt
« Zum vorherigen Eintrag Zum nächsten Eintrag »
2588 Views
Created with page4