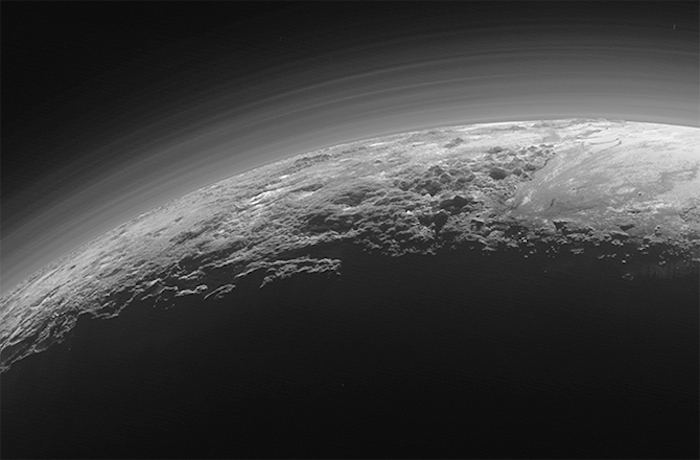 15 minutes after its closest approach to Pluto on July 14, 2015, NASA’s New Horizons spacecraft looked back toward the sun and captured this near-sunset view of the rugged, icy mountains and flat ice plains extending to Pluto’s horizon.
NASA/JHUAPL/SWRI
.
As NASA’s New Horizons mission zipped past Pluto and its system of moons on July 14, it carried out an automated, choreographed routine of rapid data gathering. Looking back at the dwarf planet, after closest approach, with dim sunlight scattering through its hazy atmosphere, the spacecraft glimpsed one of the most stunning photos in space history: Pluto blocking the sun, creating a enigmatic view of the tiny world’s atmospheric halo.
Today, in new images released by the New Horizons team, perhaps an even more captivating scene has been realized. While looking back, shortly after flyby from a distance of 11,000 miles (18,000 kilometers), the New Horizons Ralph/Multispectral Visual Imaging Camera (MVIC) zoomed into a crescent Pluto, through its atmospheric haze, revealing a very “arctic”-looking mountainous landscape.
“This image really makes you feel you are there, at Pluto, surveying the landscape for yourself,” said Alan Stern, New Horizons Principal Investigator, of the Southwest Research Institute, Boulder, Colo. “But this image is also a scientific bonanza, revealing new details about Pluto’s atmosphere, mountains, glaciers and plains.”
The haze speaks not of a frozen, static environment — there’s some incredibly dynamic processes going on that we have only just started to fathom.
“In addition to being visually stunning, these low-lying hazes hint at the weather changing from day to day on Pluto, just like it does here on Earth,” said Will Grundy, lead of the New Horizons Composition team from Lowell Observatory, Flagstaff, Ariz.
Weather? Yes, weather.
. 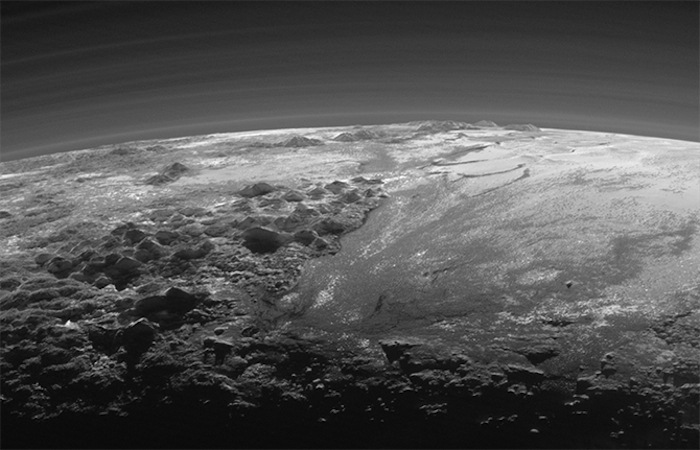 A closer view of the smooth expanse of the informally named Sputnik Planum (right) is flanked to the west (left) by rugged mountains up to 11,000 feet (3,500 meters) high, including the informally named Norgay Montes in the foreground and Hillary Montes on the skyline. The backlighting highlights more than a dozen layers of haze in Pluto’s tenuous but distended atmosphere.
. 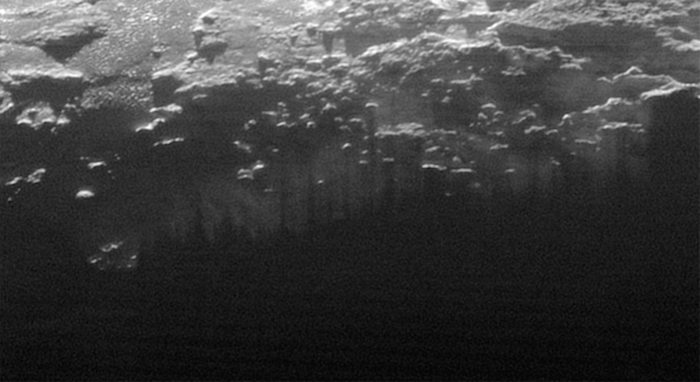 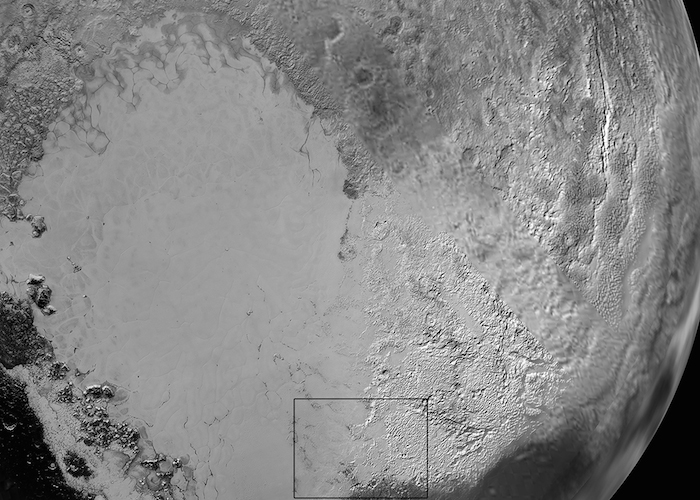 Close-up view of Sputnik Planum, also known as Pluto’s “heart.” The smooth plains in this region are thought to be composed of nitrogen ice. Image Credit: NASA/JHUAPL/SwRI
. 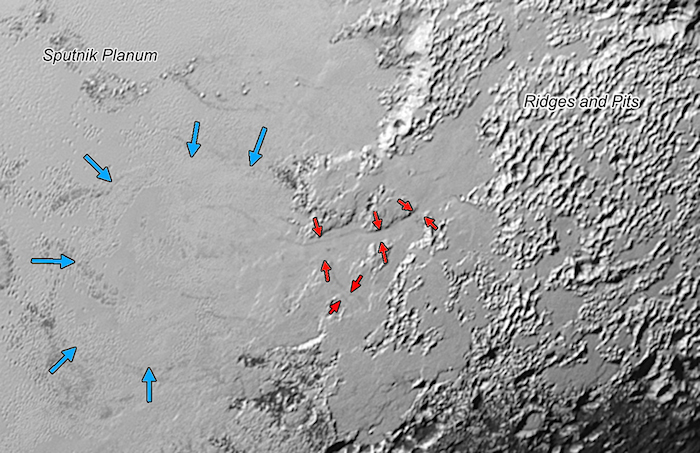 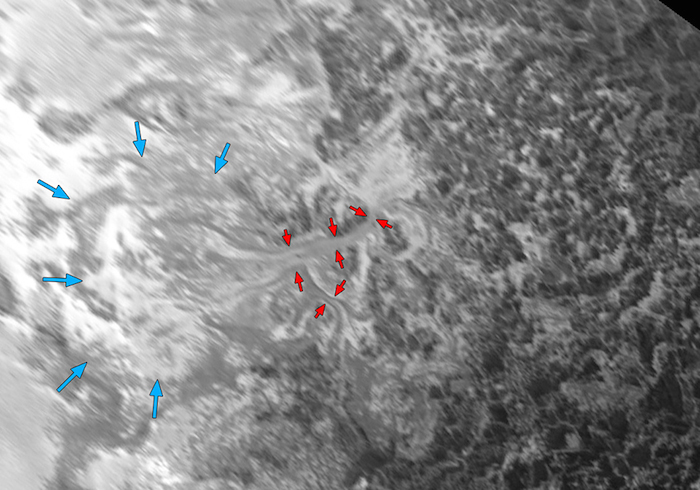 Even closer view of the nitrogen ice glaciers on Pluto. The flow front of the ice moving into Sputnik Planum is outlined by the blue arrows. Image Credit: NASA/JHUAPL/SwRI
.

Two previous images showing Pluto backlit by the Sun, with haze layers visible in the thin atmosphere. The newest images show many more haze layers in Pluto’s atmosphere. Image Credit: NASA/JHUAPL/SwRI
.
As we dive into the vast array of observations gradually being streamed back from New Horizons after its close encounter, we’re seeing a complex Pluto that is way more dynamic than we ever dreamed. Before the New Horizons encounter, astronomers knew the dwarf planet possessed some kind of atmosphere, but after seeing Pluto’s surface, evidence is building around this hazy atmosphere cycling exotic ices from the surface and into the atmosphere — akin to Earth’s hydrological cycle.
Pluto’s relatively “new” surface, featuring what appears to be active ice flows like glaciers, suggest the ices are being replenished by deposition from the atmsophere, a finding that no one would have betted on before July 14.
“We did not expect to find hints of a nitrogen-based glacial cycle on Pluto operating in the frigid conditions of the outer solar system,” said Alan Howard, of the mission’s Geology, Geophysics and Imaging team from the University of Virginia, Charlottesville. “Driven by dim sunlight, this would be directly comparable to the hydrological cycle that feeds ice caps on Earth, where water is evaporated from the oceans, falls as snow, and returns to the seas through glacial flow.”
“Pluto is surprisingly Earth-like in this regard,” added Stern, “and no one predicted it.”
For more information about how these stunning views were accomplished, see the New Horizons mission pages.
Quelle: D-News
--
Update: 24.09.2015
.
NASA’s New Horizons Probe
Glimpses Pluto’s Icy Heart
-
NASA’s New Horizons spacecraft is sending back images of Pluto taken during its flyby on July 14. The images reveal a varied surface with frozen plains and ice mountains. The piano-size spacecraft traveled nine years and three billion miles to study the dwarf planet and its five moons.

SPUTNIK PLANUM A high-resolution, enhanced color image of the the edge of Sputnik Planum, the icy plain that forms the left lobe of Pluto’s heart shape.
. 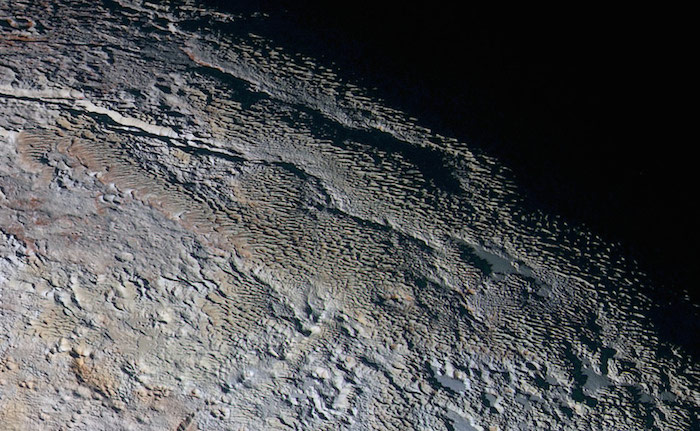 RIPPLED HILLS An enhanced color image of a “snakeskin” texture on part of Pluto’s surface.
. 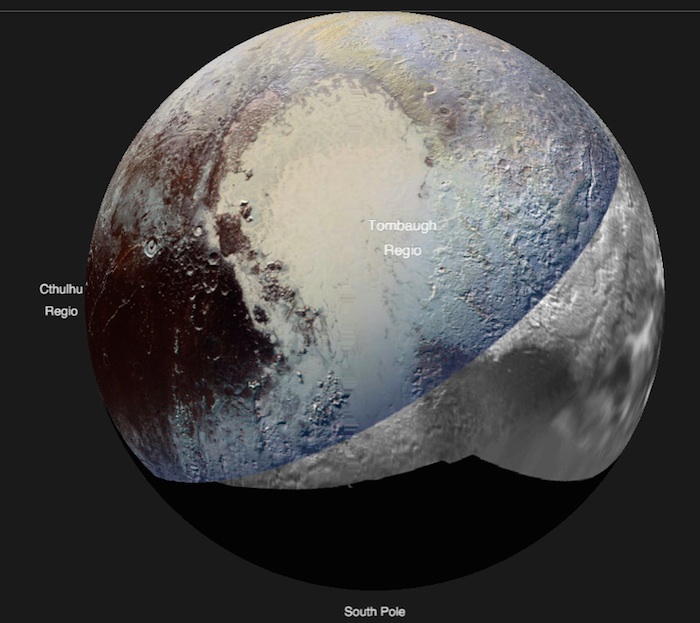 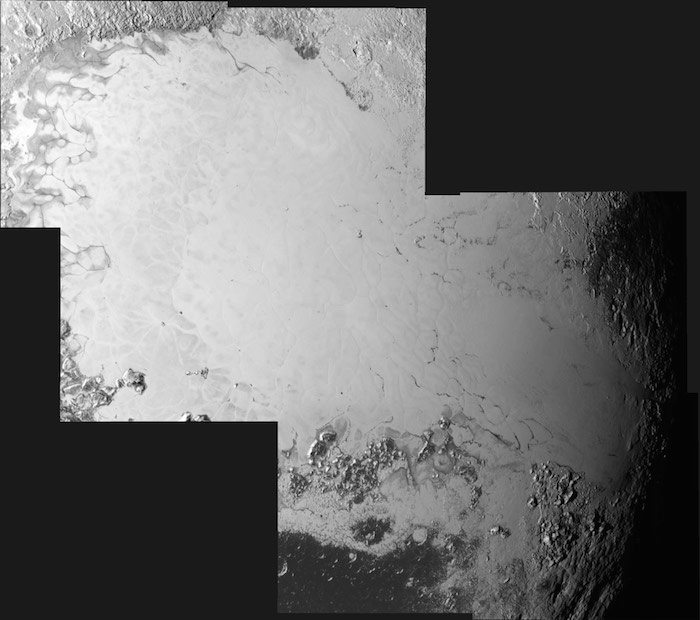 MOSAIC Seven images were combined to make this mosaic of the left lobe of Tombaugh Regio, the flat and icy heart shape on Pluto.
. 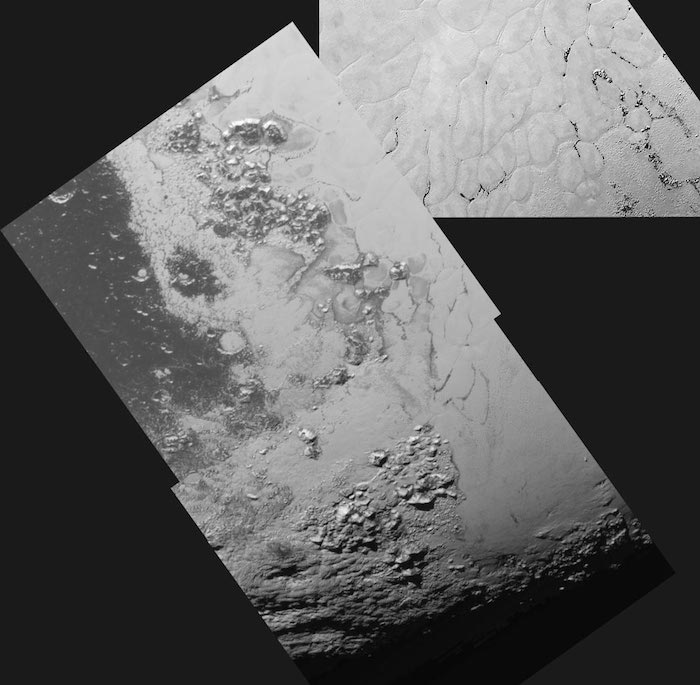 THE WESTERN EDGE OF PLUTO’S HEART New images released on Tuesday expand the visible area between Sputnik Planum, an icy plain crisscrossed with shallow troughs, and the mountain range called Norgay Montes. Many craters are visible in the dark area that forms the left edge of Pluto’s heart shape.
. 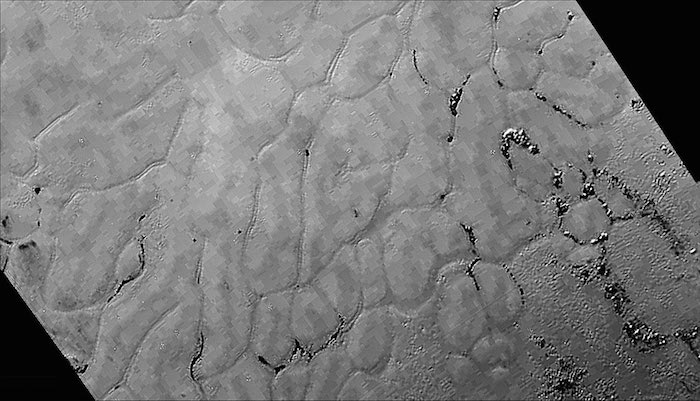 THE FROZEN PLAINS OF PLUTO A detailed image of a broad craterless plain called Sputnik Planum hints at the wide variety of surface features on Pluto. The shallow troughs crisscrossing the surface might be signs of convection, caused by heat within the planet, or might be cracks caused by surface contraction. The image was taken on July 14 from a distance of 48,000 miles. Sputnik Planum is part of the bright heart shape on Pluto known as Tombaugh Regio.
Quelle: The New York Times
-
Update: 25.09.2015
.
In stunning clarity the images reveal more fascinating details of Pluto’s surface feature informally known as Sputnik Planum including dunes, pits, a glacial ice lake and ice mountains.
. 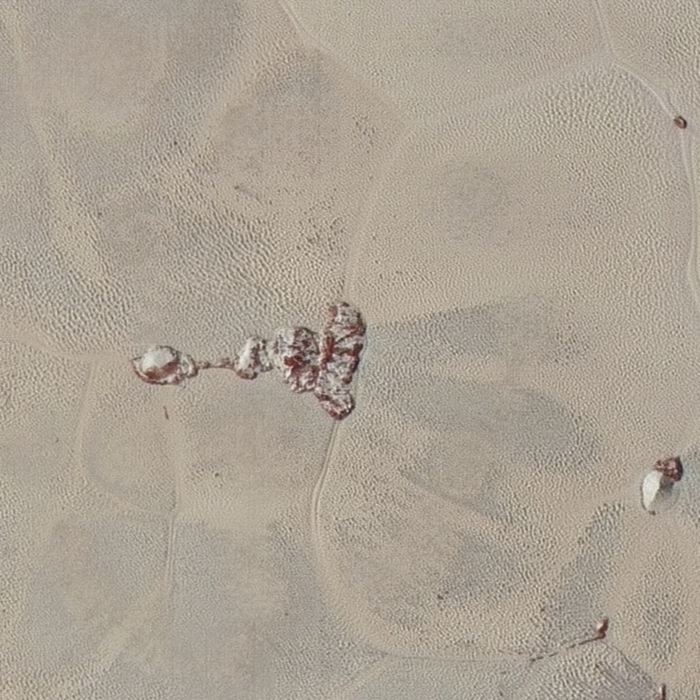 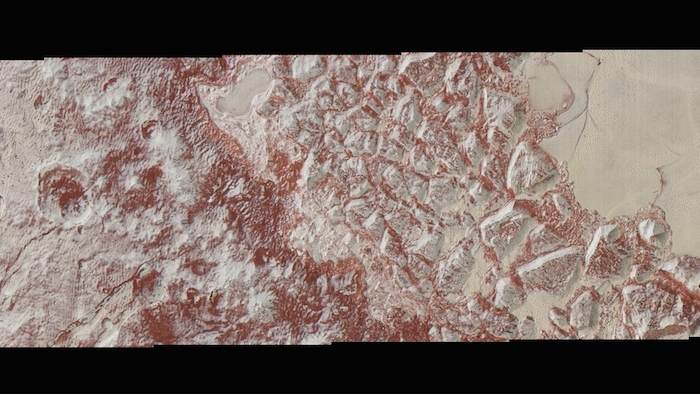 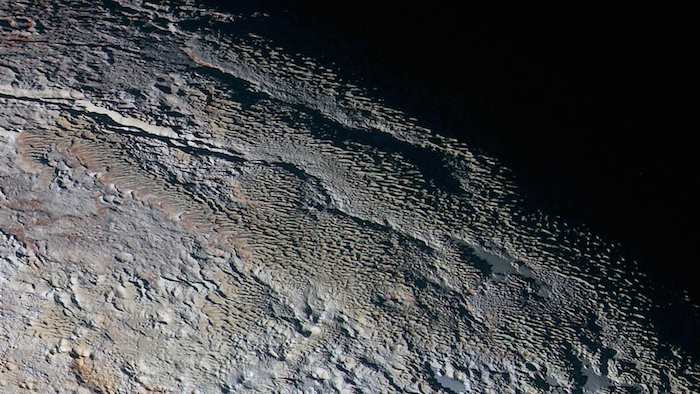 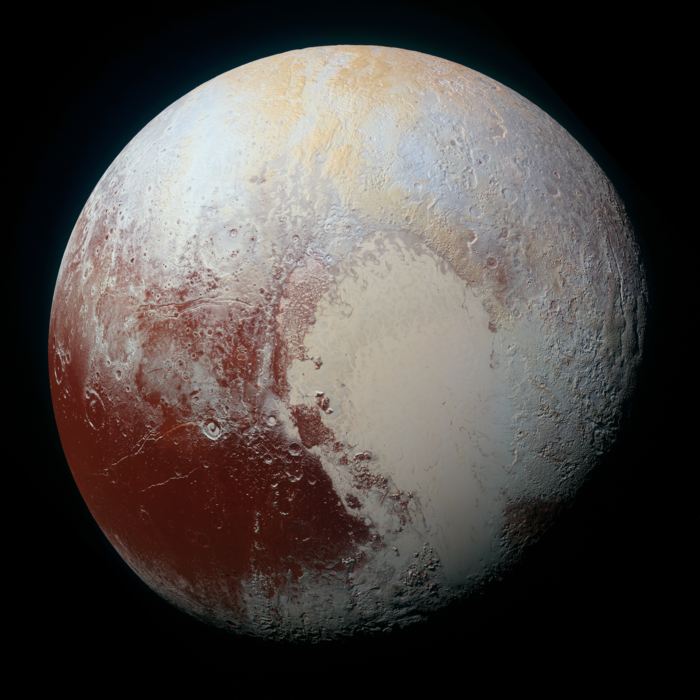 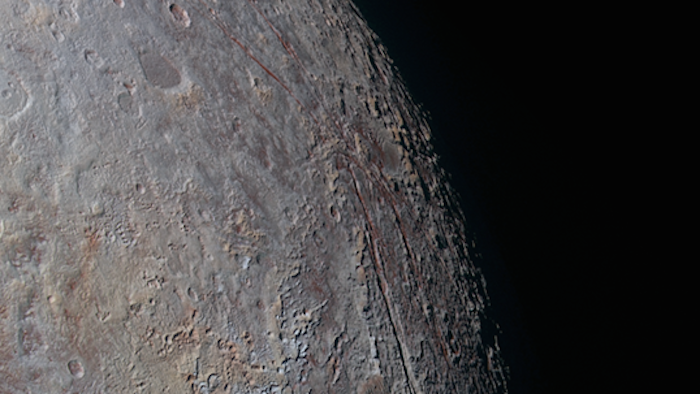 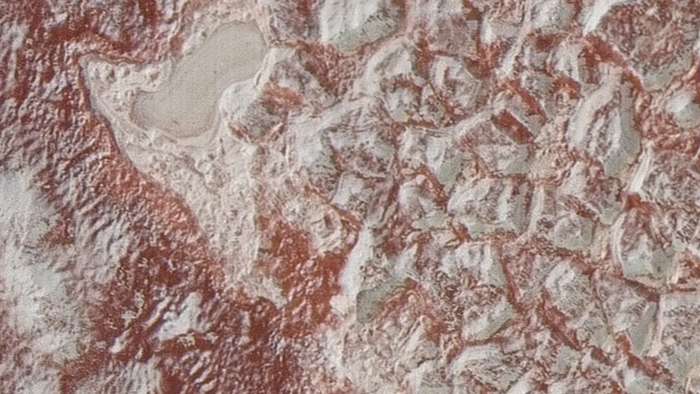 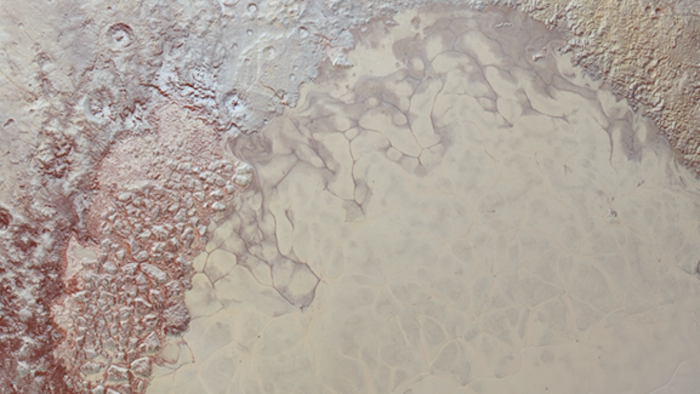 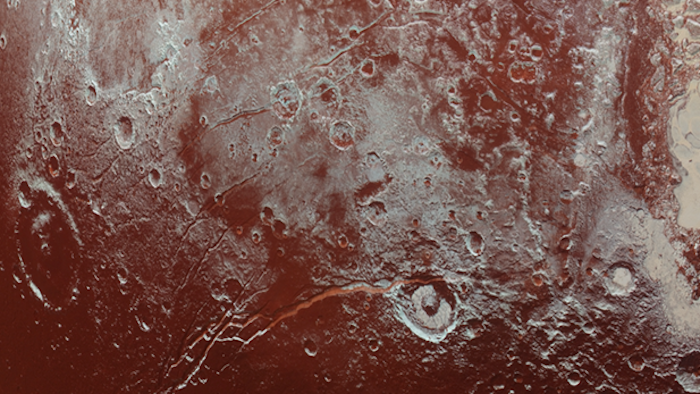 Quelle: Orlando Sentinel
---
Perplexing Pluto: New ‘Snakeskin’ Image and More from New Horizons
The newest high-resolution images of Pluto from NASA’s New Horizons are both dazzling and mystifying, revealing a multitude of previously unseen topographic and compositional details. The image below -- showing an area near the line that separates day from night -- captures a vast rippling landscape of strange, aligned linear ridges that has astonished New Horizons team members.
“It’s a unique and perplexing landscape stretching over hundreds of miles,” said William McKinnon, New Horizons Geology, Geophysics and Imaging (GGI) team deputy lead from Washington University in St. Louis. “It looks more like tree bark or dragon scales than geology. This’ll really take time to figure out; maybe it’s some combination of internal tectonic forces and ice sublimation driven by Pluto’s faint sunlight.”
The “snakeskin” image of Pluto’s surface is just one tantalizing piece of data New Horizons sent back in recent days. The spacecraft also captured the highest-resolution color view yet of Pluto, as well as detailed spectral maps and other high-resolution images.
The new “extended color” view of Pluto – taken by New Horizons’ wide-angle Ralph/Multispectral Visual Imaging Camera (MVIC) on July 14 and downlinked to Earth on Sept. 19 – shows the extraordinarily rich color palette of Pluto.
“We used MVIC’s infrared channel to extend our spectral view of Pluto,” said John Spencer, a GGI deputy lead from Southwest Research Institute (SwRI) in Boulder, Colorado. “Pluto’s surface colors were enhanced in this view to reveal subtle details in a rainbow of pale blues, yellows, oranges, and deep reds. Many landforms have their own distinct colors, telling a wonderfully complex geological and climatological story that we have only just begun to decode.”
. 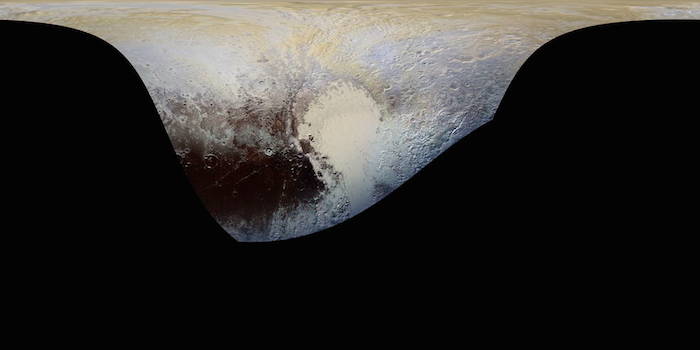 This cylindrical projection map of Pluto, in enhanced, extended color, is the most detailed color map of Pluto ever made. It uses recently returned color imagery from the New Horizons Ralph camera, which is draped onto a base map of images from the NASA’s spacecraft’s Long Range Reconnaissance Imager (LORRI). The map can be zoomed in to reveal exquisite detail with high scientific value. Color variations have been enhanced to bring out subtle differences. Colors used in this map are the blue, red, and near-infrared filter channels of the Ralph instrument.
Credits: NASA/JHUAPL/SWRI
-
Additionally, a high-resolution swath across Pluto taken by New Horizons’ narrow-angle Long Range Reconnaissance Imager (LORRI) on July 14, and downlinked on Sept. 20, homes in on details of Pluto’s geology. These images -- the highest-resolution yet available of Pluto -- reveal features that resemble dunes, the older shoreline of a shrinking glacial ice lake, and fractured, angular water ice mountains with sheer cliffs. Color details have been added using MVIC’s global map shown above.
Beyond the new images, new compositional information comes from a just-obtained map of methane ice across part of Pluto's surface that reveals striking contrasts: Sputnik Planum has abundant methane, while the region informally named Cthulhu Regio shows none, aside from a few isolated ridges and crater rims. Mountains along the west flank of Sputnik lack methane as well.
The distribution of methane across the surface is anything but simple, with higher concentrations on bright plains and crater rims, but usually none in the centers of craters or darker regions.  Outside of Sputnik Planum, methane ice appears to favor brighter areas, but scientists aren’t sure if that’s because methane is more likely to condense there or that its condensation brightens those regions.
“It's like the classic chicken-or-egg problem,” said Will Grundy, New Horizons surface composition team lead from Lowell Observatory in Flagstaff, Arizona. “We’re unsure why this is so, but the cool thing is that New Horizons has the ability to make exquisite compositional maps across the surface of Pluto, and that’ll be crucial to resolving how enigmatic Pluto works.”
“With these just-downlinked images and maps, we’ve turned a new page in the study of Pluto beginning to reveal the planet at high resolution in both color and composition,” added New Horizons Principal Investigator Alan Stern, of SwRI. “I wish Pluto’s discoverer Clyde Tombaugh had lived to see this day.”
. 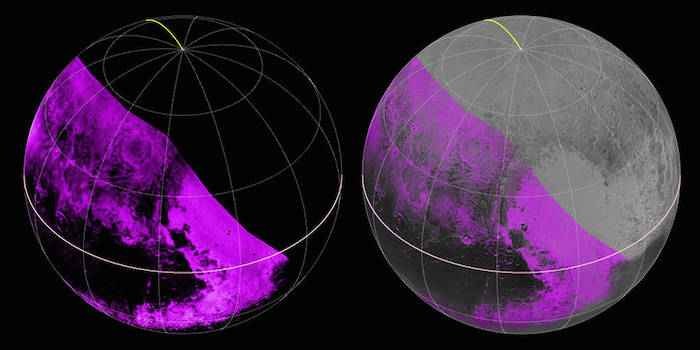 The Ralph/LEISA infrared spectrometer on NASA’s New Horizons spacecraft mapped compositions across Pluto’s surface as it flew by on July 14. On the left, a map of methane ice abundance shows striking regional differences, with stronger methane absorption indicated by the brighter purple colors here, and lower abundances shown in black. Data have only been received so far for the left half of Pluto’s disk. At right, the methane map is merged with higher-resolution images from the spacecraft’s Long Range Reconnaissance Imager (LORRI).
Quelle: NASA
Raumfahrt
« Zum vorherigen Eintrag Zum nächsten Eintrag »
2801 Views
Created with page4