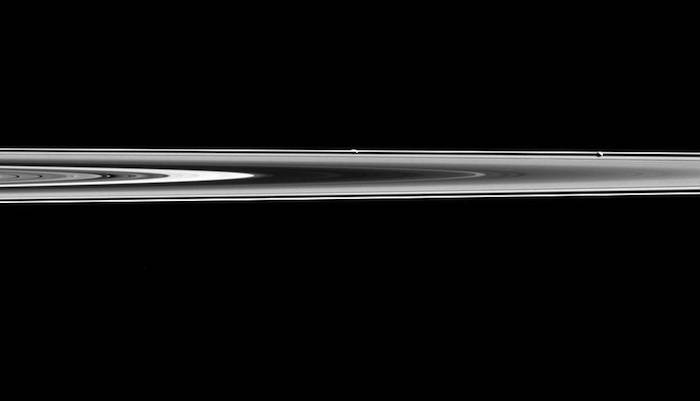 Prometheus and Pandora are almost hidden in Saturn's rings in this image.
Prometheus (53 miles or 86 kilometers across) and Pandora (50 miles or 81 kilometers across) orbit along side Saturn's narrow F ring, which is shaped, in part, by their gravitational influences help to shape that ring. Their proximity to the rings also means that they often lie on the same line of sight as the rings, sometimes making them difficult to spot.
In this image, Prometheus is the left most moon in the ring plane, roughly in the center of the image. Pandora is towards the right.
This view looks toward the unilluminated side of the rings from about 0.3 degrees below the ring plane. The image was taken in visible light with the Cassini spacecraft narrow-angle camera on May 6, 2015.
The view was obtained at a distance of approximately 994,000 miles (1.6 million kilometers) from Prometheus and at a Sun-Prometheus-spacecraft, or phase, angle of 106 degrees. Image scale is 6 miles (10 kilometers) per pixel.
The Cassini mission is a cooperative project of NASA, ESA (the European Space Agency) and the Italian Space Agency. The Jet Propulsion Laboratory, a division of the California Institute of Technology in Pasadena, manages the mission for NASA's Science Mission Directorate, Washington. The Cassini orbiter and its two onboard cameras were designed, developed and assembled at JPL. The imaging operations center is based at the Space Science Institute in Boulder, Colorado.
.