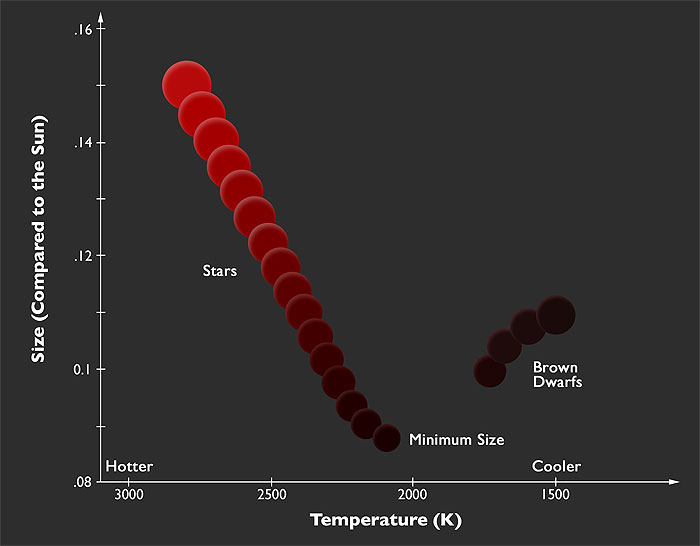 The relation between size and temperature at the point where stars end and brown dwarfs begin (based on a figure from the publication) Image credit: P. Marenfeld & NOAO/AURA/NSF.

Stars come in a tremendous size range, from many tens of times bigger than the Sun to a tiny fraction of its size. But the answer to just how small an astronomical body can be, and still be a star, has never been known. What is known is that objects below this limit are unable to ignite and sustain hydrogen fusion in their cores: these objects are referred to as brown dwarfs.
In research accepted for publication in the Astronomical Journal, the RECONS (Research Consortium On Nearby Stars) group from Georgia State University has found clear observational evidence for the theoretically predicted break between very low mass stars and brown dwarfs. The data came from the SOAR (SOuthern Astrophysical Research) 4.1-m telescope and the SMARTS (Small and Moderate Aperture Research Telescope System) 0.9-m telescope at the Cerro Tololo Inter-American Observatory (CTIO) in Chile.
For most of their lives, stars obey a relationship referred to as the main sequence, a relation between luminosity and temperature – which is also a relationship between luminosity and radius. Stars behave like balloons in the sense that adding material to the star causes its radius to increase: in a star the material is the element hydrogen, rather than air which is added to a balloon. Brown dwarfs, on the other hand, are described by different physical laws (referred to as electron degeneracy pressure) than stars and have the opposite behavior. The inner layers of a brown dwarf work much like a spring mattress: adding additional weight on them causes them to shrink. Therefore brown dwarfs actually decrease in size with increasing mass.
As Dr. Sergio Dieterich, the lead author, explained, “In order to distinguish stars from brown dwarfs we measured the light from each object thought to lie close to the stellar/brown dwarf boundary. We also carefully measured the distances to each object. We could then calculate their temperatures and radii using basic physical laws, and found the location of the smallest objects we observed (see the attached illustration, based on a figure in the publication). We see that radius decreases with decreasing temperature, as expected for stars, until we reach a temperature of about 2100K. There we see a gap with no objects, and then the radius starts to increase with decreasing temperature, as we expect for brown dwarfs. “
Dr. Todd Henry, another author, said: “We can now point to a temperature (2100K), radius (8.7% that of our Sun), and luminosity (1/8000 of the Sun) and say ‘the main sequence ends there’ and we can identify a particular star (with the designation 2MASS J0513-1403) as a representative of the smallest stars.”
Aside from answering a fundamental question in stellar astrophysics about the cool end of the main sequence, the discovery has significant implications in the search for life in the universe. Because brown dwarfs cool on a time scale of only millions of years, planets around brown dwarfs are poor candidates for habitability, whereas very low mass stars provide constant warmth and a low ultraviolet radiation environment for billions of years. Knowing the temperature where the stars end and the brown dwarfs begin should help astronomers decide which objects are candidates for hosting habitable planets.
Also, because brown dwarfs cool forever, they eventually become a type of macroscopic dark matter, so it is important to know how much dark matter is trapped in the form of extremely old and cold brown dwarfs.
The research highlights the capabilities of the National Optical Astronomy Observatory system in a single project. The SOAR observations provided the missing link to a wealth of data that had previously been obtained using telescopes under the auspices of NOAO. As Dieterich explains: “We used the SOAR 4.1-m telescope to measure the visible light of faint stars and brown dwarfs, and the CTIO 0.9-m telescope to obtain precise measurements of their distances. We then combined these measurements with infrared data taken at the CTIO 1.3-m telescope and the WISE space telescope. Three out of four of these telescopes are public telescopes located at CTIO, and the fourth explores wavelengths that are only accessible from space.”
CTIO is a division of the National Optical Astronomy Observatory, which is operated by the Association of Universities for Research in Astronomy Inc. (AURA) under a cooperative agreement with the National Science Foundation.
Quelle: NOAO
« Zum vorherigen Eintrag Zum nächsten Eintrag »
3697 Views
Created with page4