Though unseen by the naked eye, the aurora-like scenes streaking across the Milky Way were captured by photographers 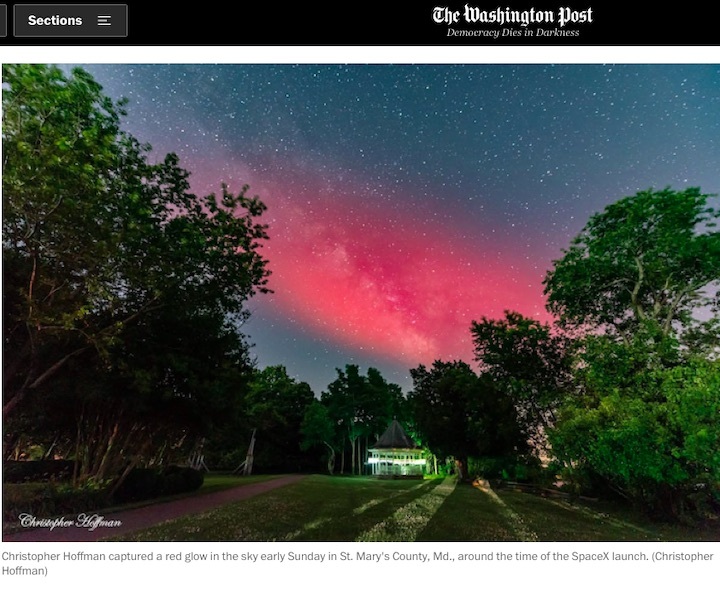 The Milky Way was cast in an eerie shade of red early Sunday,bewildering sky-watching photographers across the Mid-Atlantic.

Only a lucky few captured the spectacle on camera, and it wasn’t visible to the naked eye. Long-exposure photographs revealed the scarlet streak, which lasted for only minutes around 12:30 a.m. Sunday.

Many think the red glow was tied to the launch of SpaceX’s Falcon 9, which occurred about the same time. The glow was photographed in Maryland, Virginia, North Carolina, Tennessee and Ohio.

“At first I thought maybe a thin cloud but not the case,” Christopher Hoffman, who photographed the scene in St. Mary’s County, Md., said in an email. “After research I came across a article that said spaceX launch Falcon 9 was launched at 12:27 a.m.”

David Johnston, who photographed the scene from the Dolly Sods Wilderness in eastern West Virginia, posted a detailed analysis in the Dolly Sods Facebook group that also linked the glow to the SpaceX rocket.

“I was shooting the Milky Way behind some silhouetted rocks when suddenly one of my images had this prominent red blob right in front of the core, that had not been there in the previous image 3 minutes before,” Johnston wrote in his Facebook post. “I was really annoyed because it ruined my picture, but I figured it would go away.”

Instead, Johnston said, it grew and extended to cover a large part of the southeastern sky. “I had no idea what this was and it was kind of freaking me out,” he wrote. He later concluded that the glow was linked to the SpaceX rocket, because of the launch timing.

About the same time that Johnston and Hoffman photographed the glow, David Cortner of Rutherford College, N.C., captured what he described as “rocket-powered aurora,” according to SpaceWeather.com.

He said the red blob was related to the engine burn of the Falcon 9′s second stage, which typically starts about three minutes after liftoff and lasts about six minutes. The second-stage burning usually occurs from 68 to 310 miles high, where positive oxygen ions are present in the atmosphere. These oxygen ions can combine with other ambient molecules and form molecular O2+, N2+, and NO+ ions, which react with electrons and produce a red glow. During rocket engine burns, the exhaust gases form the molecular ions at rates 100 to 1,000 times as fast as normal reactions — producing a more pronounced red glow.

“These days cameras became very sensitive and can capture things that before were possible only with scientific instruments,” Martinis, a professor at Boston University, said in an email. Because of diffusion, he said, the blob can expand to more than 60 degrees of the sky, as seen in the photos from Sunday.

Red glows have been observed with past rocket launches, including that of a Titan rocket in 2005. In general, such disturbances in the ionosphere do not harm humans, but they can affect GPS signals and disrupt aircraft navigation. Typically, however, these events and effects can be predicted, as launch dates, times and trajectories are known ahead of time.

Some, however, think SpaceX may not be the source. Tamitha Skov, a space weather expert, believes it was probably an actual aurora borealis.

“It is highly likely this is what we often call ‘sub-visual’ aurora,” she wrote in an email. “During this time we were at active conditions (Kp 4) due to some fast solar wind hitting Earth. Considering this is Maryland, which is at mid-latitudes, it doesn’t surprise me that this was captured on camera, but not visible to the naked eye.”

She continued, “A student of mine saw the SpaceX rocket launch at a similar time and even in the camera, the scattered light from the rocket exhaust remained a localized white plume [see tweet below], so I really do not think the above phenomenon is a result of the SpaceX launch, but simply another dazzling reminder of how far south aurora really does occur, if we are willing to do what it takes to look for it!”

SpaceWeather.com, however, wrote that it was unlikely there was enough geomagnetic activity from the sun for auroras.