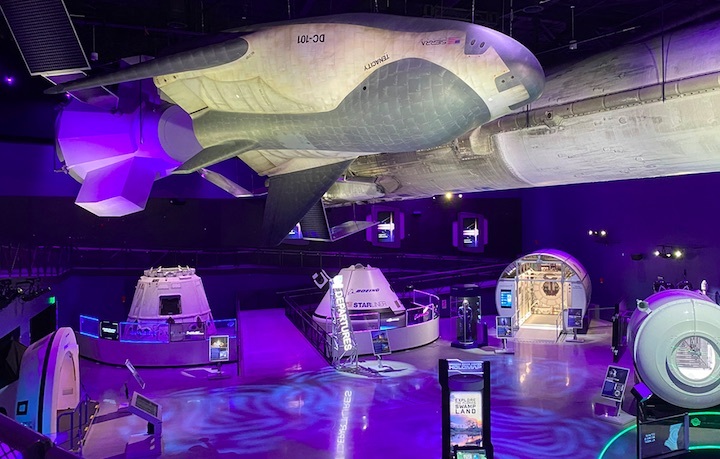 If NASA's Kennedy Space Center Visitor Complex serves as a theme park for the space set, then its newest attraction is the agency's own take on "Tomorrowland."

"Gateway: The Deep Space Launch Complex," opening on June 15, invites the public to not just step, but fly into the future of space travel. Unlike the fantasy-based experiences found elsewhere in Florida though, Gateway grounds itself in the real activities of the United States' 21st century multi-user spaceport.

"The Gateway is the 'new and next' for NASA and the space industry," Therrin Protze, chief operating officer for the Kennedy Space Center Visitor Complex, said in an interview with collectSPACE. "We really focused on what's going on now and what's going on for the future with many of the space partners."

"But then as you journey up [into the building], you go into the other piece of the attraction, which is 'Spaceport KSC,' which is what we think a spaceport will look like in the future," said Protze.

Part museum and part 4D experience, the 50,000-square-foot (4,600-square-meter) multi-level Gateway emerges from the far end of the visitor complex's iconic Rocket Garden, juxtaposing the vehicles of the past with those of the near future. More than just a static display though, each of the artifacts in Gateway engages guests through interactives.

"It is very much focused on the educational aspect of what is next for NASA and the space industry through these interactions," Protze said.

Upon entering Gateway, visitor center guests become "space travelers" and are immediately surrounded by authentic flight-flown hardware and full-scale models, which are placed around the floor and suspended from above to allow for 360-degree viewing. Some of the spacecraft are transplants from the center's previous "NASA Now" gallery, such as the Orion Exploration Flight Test-1 (EFT-1) capsule that flew in 2014, but many are new.

Overhead hangs a full-scale model of Sierra Space's Dream Chaser space plane, which is set to make its first trip to the space station in 2023, and spanning the length of the hall is one of the SpaceX Falcon Heavy side boosters that helped put CEO Elon Musk's Tesla Roadster in orbit in 2018.

As a showcase of the now and near future, the gallery is designed to advance as new developments are made in spaceflight.

"We made it so it can evolve," said Protze. "As new things come available and we continue to work with the space partners, we can change those exhibits."

Proceeding to the second floor, guests can interact with a floor-to-ceiling digital wall to learn about 40 different satellites and space probes. Here they can also visit the HoloTube to manipulate holographic imagery, video and animation about the next-generation James Webb Space Telescope.

All of this leads to "Spaceport KSC," where the attraction earns its name. Visitors are transported to an airport of the future, with all of the atmospheric chatter and out-the-window views of active launches and landings one would associate with a busy terminal. Four gates offer boarding for four destinations: Cosmic Wonders, Daring Explorers, Red Planet and Uncharted Worlds.

Each "spaceplane" sits 22 people and each trip is about four and a half minutes long, regardless if you are traveling to Mars, to an exoplanet or even further out, to the vistas revealed by the Hubble Space Telescope. Each journey is different, even down to how you return to Earth.

"Two of the spaceplanes land horizontally on a runway and two land vertically," said Protze. "There are going to be multiple space carriers in the future and they all have different ideas of how they want to launch and land."

In addition to the exhibits and experiences, Gateway also includes a new restaurant. The Space Bowl Bistro offers acai and choose-your-protein bowls with choices ranging from quinoa, rice, greens and noodle bases to proteins, including barbecue short rib, marinated ahi tuna and jackfruit.