The eruptions may have produced several transient atmospheres 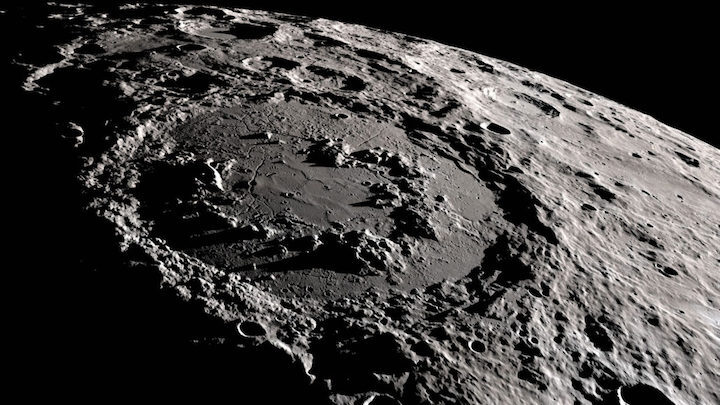 Four billion years ago, lava spilled onto the moon’s crust, etching the man in the moon we see today. But the volcanoes may have also left a much colder legacy: ice.

Two billion years of volcanic eruptions on the moon may have led to the creation of many short-lived atmospheres, which contained water vapor, a new study suggests. That vapor could have been transported through the atmosphere before settling as ice at the poles, researchers report in the May Planetary Science Journal.

Since the existence of lunar ice was confirmed in 2009, scientists have debated the possible origins of water on the moon, which include asteroids, comets or electrically charged atoms carried by the solar wind (SN: 11/13/09). Or, possibly, the water originated on the moon itself, as vapor belched by the rash of volcanic eruptions from 4 billion to 2 billion years ago.

“It’s a really interesting question how those volatiles [such as water] got there,” says Andrew Wilcoski, a planetary scientist at the University of Colorado Boulder. “We still don’t really have a good handle on how much are there and where exactly they are.”

Wilcoski and his colleagues decided to start by tackling volcanism’s viability as a lunar ice source. During the heyday of lunar volcanism, eruptions happened about once every 22,000 years. Assuming that H2O constituted about a third of volcano-spit gasses — based on samples of ancient lunar magma — the researchers calculate that the eruptions released upward of 20 quadrillion kilograms of water vapor in total, or the volume of approximately 25 Lake Superiors.

Some of this vapor would have been lost to space, as sunlight broke down water molecules or the solar wind blew the molecules off the moon. But at the frigid poles, some could have stuck to the surface as ice.

For that to happen, though, the rate at which the water vapor condensed into ice would have needed to surpass the rate at which the vapor escaped the moon. The team used a computer simulation to calculate and compare these rates. The simulation accounted for factors such as surface temperature, gas pressure and the loss of some vapor to mere frost.

About 40 percent of the total erupted water vapor could have accumulated as ice, with most of that ice at the poles, the team found. Over billions of years, some of that ice would have converted back to vapor and escaped to space. The team’s simulation predicts the amount and distribution of ice that remains. And it’s no small amount: Deposits could reach hundreds of meters at their thickest point, with the south pole being about twice as icy as the north pole.

The results align with a long-standing assumption that ice dominates at the poles because it gets stuck in cold traps that are so cold that ice will stay frozen for billions of years.

These results from a computer simulation depict the potential present-day distribution and thickness of ice at the lunar poles following volcanic eruptions 4 billion to 2 billion years ago. The south pole (left) retains more ice because it has more cold traps than the north pole (right). The dotted lines depict longitude and latitude.

“There are some places at the lunar poles that are as cold as Pluto,” says planetary scientist Margaret Landis of the University of Colorado Boulder.

Volcanically sourced water vapor traveling to the poles, though, probably depends on the presence of an atmosphere, say Landis, Wilcoski and their colleague Paul Hayne, also a planetary scientist at the University of Colorado Boulder. An atmospheric transit system would have allowed water molecules to travel around the moon while also making it more difficult for them to flee into space. Each eruption triggered a new atmosphere, the new calculations indicate, which then lingered for about 2,500 years before disappearing until the next eruption some 20,000 years later.

This part of the story is most captivating to Parvathy Prem, a planetary scientist at Johns Hopkins Applied Physics Laboratory in Laurel, Md., who wasn’t involved in the research. “It’s a really interesting act of imagination.… How do you create atmospheres from scratch? And why do they sometimes go away?” she says. “The polar ices are one way to find out.”

If lunar ice was belched out of volcanoes as water vapor, the ice may retain a memory of that long-ago time. Sulfur in the polar ice, for example, would indicate that it came from a volcano as opposed to, say, an asteroid. Future moon missions plan to drill for ice cores that could confirm the ice’s origin.

Looking for sulfur will be important when thinking about lunar resources. These water reserves could someday be harvested by astronauts for water or rocket fuel, the researchers say. But if all the lunar water is contaminated with sulfur, Landis says, “that’s a pretty critical thing to know if you plan on bringing a straw with you to the moon.”       Quelle: ScienceNews