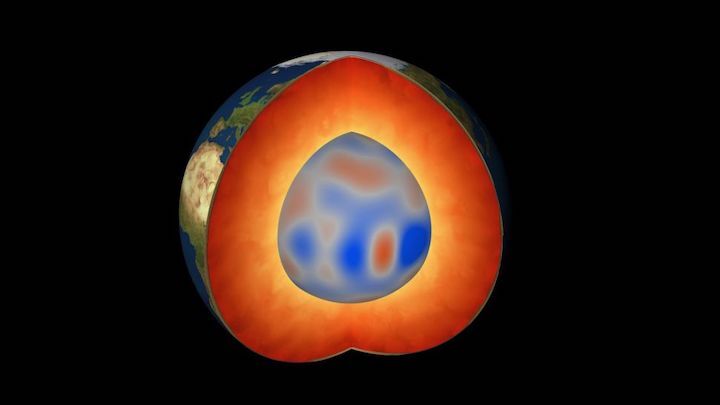 A new type of magnetic-field wave propagating around Earth's core, discovered thanks to satellite measurements, could explain some odd behaviors of the planet's magnetic field. (Image credit: ESA)

A new type of slowly traveling magnetic wave discovered inside Earth may shed light on some unexplained fluctuations in the planet's magnetic field.

Earth's magnetic field, generated by its core of molten metals, protects the planet from harmful cosmic radiation. Despite decades of research, scientists still don't fully understand the field's behavior. Over the past 20 years, they have seen strange fluctuations in satellite measurements of the field's strength, which they couldn't explain.

Now, a new study, based on data from the European Space Agency's (ESA) Swarm mission, has revealed a previously unknown type of magnetic wave that might be behind the odd behavior. The wave propagates more than 1,860 miles (3,000 kilometers) below Earth's surface, where the planet's core meets its mantle. It travels westward at 930 miles (1,500 km) per year, which means it circumnavigates the globe every seven years.

"Geophysicists have long theorized over the existence of such waves, but they were thought to take place over much longer time scales than our research has shown," Nicolas Gillet, a geophysicist at the University of Grenoble Alpes in France and the lead author of the new paper, said in an ESA statement(opens in new tab). "Measurements of the magnetic field from instruments based on the surface of Earth suggested that there was some kind of wave action, but we needed the global coverage offered by measurements from space to reveal what is actually going on."

The researchers combined data from the three satellites of the Swarm constellation with measurements from the now retired German satellite CHAMP and the Danish Ørsted. When the team ran the measured oscillations through a computer model simulating Earth's geodynamo, the process of the magnetic field's generation through the motions of the planet's molten core, they found that such slow-traveling waves could be the cause of the fluctuations.

The researchers added that the waves align in a column along Earth's axis and cause the most significant magnetic-field changes around the planet's equator.

So far, researchers don't know what kinds of processes in Earth's core trigger the waves.

"Our research suggests that other such waves are likely to exist, probably with longer periods — but their discovery relies on more research," Gillet said.

In addition, "This current research is certainly going to improve the scientific model of the magnetic field within Earth's outer core," said Ilias Daras, ESA's Swarm mission scientist. "It may also give us new insight into the electrical conductivity of the lowermost part of the mantle and also of Earth's thermal history."