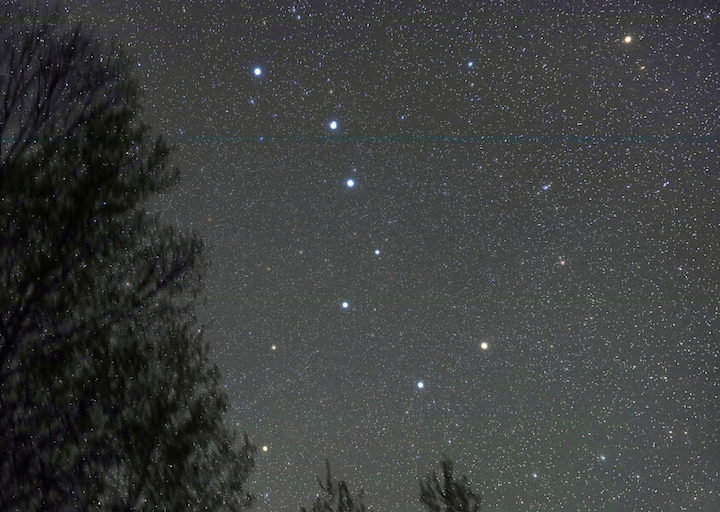 To the uninitiated, the stars comprising Orion's Belt or the Southern Cross form such tight and distinctive patterns it's tempting to think they're physically related. Nothing could be further from the truth. Despite appearances, the stars in these groups and many others lie at different distances and only appear linked because we view them along similar lines of sight. Epsilon (ε) Cygni, the star marking the eastern end of crossbeam in the Northern Cross asterism, is a good example. Located 73 light-years from Earth, it's almost 36 times closer than Deneb, also known as Alpha (α) Cygni, at the head of the cross.

The Big Dipper — the brightest and most recognizable portion of Ursa Major — is an exception. If we remove Alkaid at the handle-end and Dubhe from the Bowl, the remaining five stars all lie at approximately the same distance — between 80 and 83 light-years. In 1869, British astronomer Richard Proctor discovered that they shared the same proper motion, moving in tandem to the southeast at the rate of one full Moon diameter every 16,000 years. The stars' shared distance and motion implied that they were once bound more tightly but have since dispersed into a loose confederation we know today as the Ursa Major Moving Cluster (also referred to as the Ursa Major Moving Group), or Collinder 285.

Alkaid, located 104 light-years away, and Dubhe, at 123 light-years, are not only considerably farther away than the others but moving decidedly in opposite directions. Busted!

To see the Dipper best, lie on your back and look straight up. In late May, it stands almost directly overhead at nightfall. If you mentally block out Dubhe and Alkaid you're looking at the core of a weakly bound star cluster that includes an additional seven stars, three of which are visible with the naked eye and the others in 50-mm binoculars or a small telescope. With an overall magnitude of +0.4, Collinder 285 is one of the brightest stellar moving group in the sky and also the closest.

An additional 18 outliers share the cluster's motion for a total of 31 stars that have received a definitive "Yes" on the membership list compiled by Clemson University astronomer Jeremy King in his Ursa Major Moving Group survey published in 2003 in the Astronomical Journal. They include notable bright stars Alpha (α) Corona Borealis (a.k.a. Alphecca), Beta (β) Serpentis, and Zeta (ζ) Triangulum Australis. There are an additional 28 likely members (marked as "Yes?" with a question mark) for a total of 59. Despite its scantiness the Group extends from deep in the Southern Hemisphere almost to the North Celestial Pole.

Born inside a dense cloud of gas and dust roughly 500 ± 100 million years ago, the future Ursa Major Group formed a compact open cluster in Cambrian skies, a time when life rapidly diversified in the world's oceans and the first plants set root on land. A 2014 spectroscopic surveyshowed that many of the stars display a similar chemical composition — further evidence of a shared origin.

Open star clusters have lifetimes measured in the hundreds of millions of years before gravitational tides from passing molecular clouds of gas and dust pry them apart. In our era, we're witnessing the Group's transition from a self-contained cluster to a future of anonymity as field stars.

A typical open cluster's core might measure 3 to 4 light-years across; the Ursa Major Moving Cluster currently spans 30 light-years long by 18 light-years wide. And the whole works is flying through space together at 14 km/s (31,300 mph) towards a common point in the direction of the constellation Sagittarius. In about a million years, it will pass about 51 light-years from the solar system.

Like schools of fish across the world's oceans, stellar streams are on the move throughout the galaxy. Ursa Major's cohorts include the AB Doradus Moving Group, located about 65 light-years away in Dorado with around 37 members, as well as the Beta (β) Pictoris Moving Group (28 stars 115 light-years away in Pictor). Stars in each pack share a common motion, age, and distance and remain in touch despite the best the galaxy has thrown at them.     Quelle: Sky&Telescope