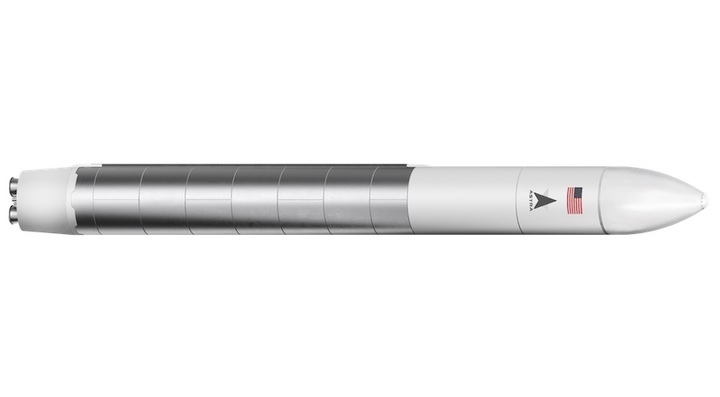 An illustration of Astra’s Rocket 4.0, which will be able to place up to 300 kilograms into low Earth orbit. Credit: Astra

WASHINGTON — Astra disclosed details about its new launch vehicle that will be capable of carrying heavier payloads and flying more frequently.

At its “Spacetech Day” event at its Alameda, California, headquarters May 12, company executives offered some details about what it calls Launch System 2.0, a system that includes a new rocket called Rocket 4.0.

The vehicle will be able to place up to 300 kilograms into low Earth orbit and 200 kilograms into sun-synchronous orbit at a “base price” of $3.95 million. By contrast, Astra’s current Rocket 3.3 vehicle can accommodate a small fraction of that payload, having to date launched only a few cubesats at a time.

Chris Kemp, Astra’s chief executive, said at the event that the company estimated that the average mass of satellites expected to launch over the next 10 years is 180 kilograms. “Our objective is to address the majority of the market for megaconstellation customers,” he said.

Astra didn’t disclose technical details about the engines other than they use a turbopump, rather than battery-powered pumps as on Delphin, and run on liquid oxygen and kerosene. The company did show videos of an undated qualification acceptance test firing of the engine.

The company didn’t respond to a question about whether the engine was developed internally or uses technology from another company, after a report last year that Astra planned to license Firefly Aerospace’s Reaver engine, which is similar in performance to the engine described in the presentation.

The overall launch system is still designed to be easily transportable. “It will still be, critically, a mobile launch system. The rocket will still be transportable in shipping containers,” Kemp said. “It really differentiates us from the large rockets when you can pack the entire thing up, put it on a plane, a truck, a train, a container ship, move it anywhere around the world discreetly.”

The new launch system will also require fewer people in mission control. Kemp said the company has already reduced the staff required from 21 to 8, but would reduce it further with the new vehicle. “In this new model, the idea is a pilot and a co-pilot,” he said. “If hundreds of passengers can get on a jet and fly across the ocean with a pilot and a co-pilot, why can’t a couple of people fly a rocket?”

Astra did not disclose the cost of developing Launch System 2.0 in the presentation or a detailed schedule, but one slide stated a test launch of Rocket 4.0 was planned for the fourth quarter of this year.

While Astra is scaling up its launch system, it is not planning to incorporate reusability, unlike Rocket Lab, which tested a midair recovery of its Electron booster during a May 2 launch.

“We get a lot of questions about reusability,” said Adam London, Astra’s chief technology officer. While reusing rockets is “incredibly cool,” he argued the economics did not make sense for Astra.

“Reusing rockets is hard,” he said, with both capital costs that need to be amortized as well as costs of refurbishing the vehicle between flights. “Our modeling and our analysis suggests that payoff is somewhere in the range of 20 and 50 reuses.”