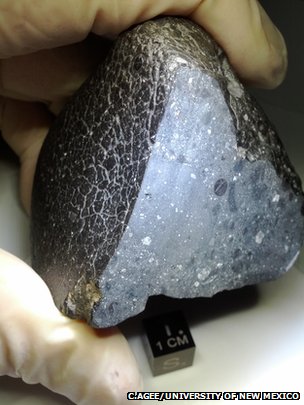 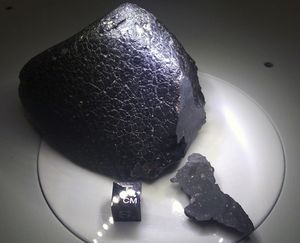 A dark lump of rock found in the Moroccan desert in 2011 is a new type of Martian meteorite, say scientists.

Weighing 320g, the stone has been given the formal name Northwest Africa (NWA) 7034 - but is nicknamed "Black Beauty".

Its texture and chemistry set it apart from all previous objects picked up off the surface of Earth but known to originate on the Red Planet.

The researchers' analysis, reported in Science magazine, shows the meteorite to be just over two billion years old.

The study was led by Carl Agee from the University of New Mexico, US.

"It has some resemblance to the other Martian meteorites but it's also distinctly different in other respects," he told BBC News, "both in the way it just looks in hand sample, but also in its elemental composition."

There are just over 100 Martian meteorites currently in collections worldwide. They were all blasted off the Red Planet by some asteroid or cometary impact, and then spent millions of years travelling through space before falling to Earth.

Their discovery was mostly chance (few were seen in the act of falling) but their dark forms mean they will have caught the eye of meteorite hunters who scour desert sands and polar ice fields for rare rocks that can trade for tens of thousands of dollars.

Virtually all the Martian meteorites can be put in one of three classifications referred to as Shergotty, Nakhla, and Chassigny after key specimens. Scientists will often refer to these rocks simply as the SNC meteorites.

Prof Agee and colleagues argue that NWA 7034 now be put in its own class.

This rock is a basaltic breccia in character. It is made of a jumble of fragments that have been cemented back together in the high temperatures of a volcanic eruption. There are many examples of Moon meteorites that look this way, but no SNC ones.

Geochemically, NWA 7034 is dominated by alkali elements such as potassium and sodium. This is precisely what the robot rovers studying basalts down on the ground on Mars also see. This is not a trait seen in the SNC meteorites, interestingly.

Prof Agee's team also see much more water in the new meteorite - about 6,000 parts per million. That is about 10 times more water bound into the rock than is the case in the most water-rich SNC specimens.

This says something about the environment in which the rock formed, indicating there was a much greater abundance of water to interact with the basalt.

"And of course those most recent times on Mars have witnessed a cold, dry planet with a thin atmosphere. A lot of people believe that early Mars, on the other hand, was a lot warmer and a lot wetter, and maybe even a harbour for life.

"So, what happened in between? When did this transformation to drier conditions occur? Well, NWA 7034, because of its greater age, may be able to address those questions." 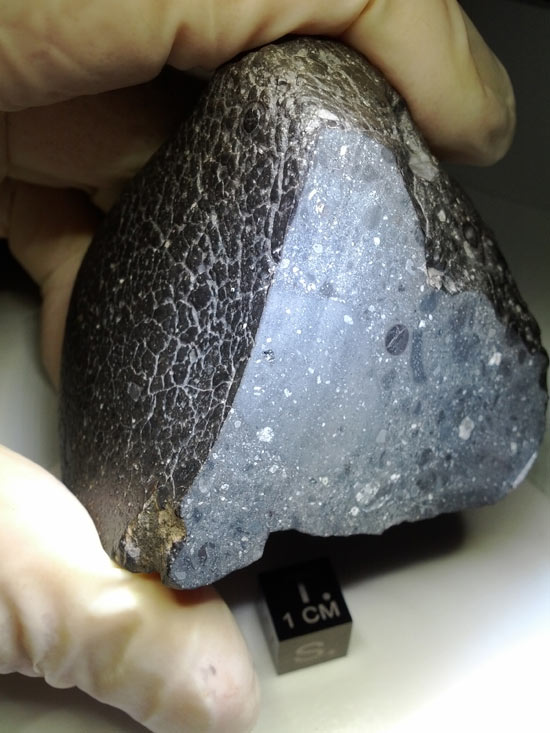 WASHINGTON -- NASA-funded researchers analyzing a small meteorite that may be the first discovered from the Martian surface or crust have found it contains 10 times more water than other Martian meteorites from unknown origins.

This new class of meteorite was found in 2011 in the Sahara Desert. Designated Northwest Africa (NWA) 7034, and nicknamed "Black Beauty," it weighs approximately 11 ounces (320 grams). After more than a year of intensive study, a team of U.S. scientists determined the meteorite formed 2.1 billion years ago during the beginning of the most recent geologic period on Mars, known as the Amazonian.

"The age of NWA 7034 is important because it is significantly older than most other Martian meteorites," said Mitch Schulte, program scientist for the Mars Exploration Program at NASA Headquarters in Washington. "We now have insight into a piece of Mars' history at a critical time in its evolution."

The meteorite is an excellent match for surface rocks and outcrops NASA has studied remotely via Mars rovers and Mars-orbiting satellites. NWA 7034's composition is different from any previously studied Martian meteorite. The research is published in Thursday's edition of Science Express.

"The contents of this meteorite may challenge many long held notions about Martian geology," said John Grunsfeld, associate administrator for NASA's Science Mission Directorate in Washington. "These findings also present an important reference frame for the Curiosity rover as it searches for reduced organics in the minerals exposed in the bedrock of Gale Crater."

NWA 7034 is made of cemented fragments of basalt, rock that forms from rapidly cooled lava. The fragments are primarily feldspar and pyroxene, most likely from volcanic activity. This unusual meteorite's chemistry matches that of the Martian crust as measured by NASA's Mars Exploration Rovers and Mars Odyssey Orbiter.

"This Martian meteorite has everything in its composition that you'd want in order to further our understanding of the Red Planet," said Carl Agee, leader of the analysis team and director and curator at the University of New Mexico's Institute of Meteoritics in Albuquerque. "This unique meteorite tells us what volcanism was like on Mars 2 billion years ago. It also gives us a glimpse of ancient surface and environmental conditions on Mars that no other meteorite has ever offered."

The research team included groups at the University of California at San Diego and the Carnegie Institution in Washington. Experiments were conducted to analyze mineral and chemical composition, age, and water content.

Researchers theorize the large amount of water contained in NWA 7034 may have originated from interaction of the rocks with water present in Mars' crust. The meteorite also has a different mixture of oxygen isotopes than has been found in other Martian meteorites, which could have resulted from interaction with the Martian atmosphere.

Most Martian meteorites are divided into three rock types, named after three meteorites; Shergotty, Nakhla, and Chassigny. These "SNC" meteorites currently number about 110. Their point of origin on Mars is not known and recent data from lander and orbiter missions suggest they are a mismatch for the Martian crust. Although NWA 7034 has similarities to the SNC meteorites, including the presence of macromolecular organic carbon, this new meteorite has many unique characteristics.

"The texture of the NWA meteorite is not like any of the SNC meteorites," said co-author Andrew Steele, who led the carbon analysis at the Carnegie Institution's Geophysical Laboratory. "This is an exciting measurement in Mars and planetary science. We now have more context than ever before to understanding where they may come from."

The research was funded by NASA's Cosmochemistry Program and Astrobiology Institute, part of the Planetary Science Division in the Science Mission Directorate at NASA Headquarters. The research also was supported by the New Mexico Space Grant Consortium in Las Cruces, and the National Science Foundation in Arlington, Va.