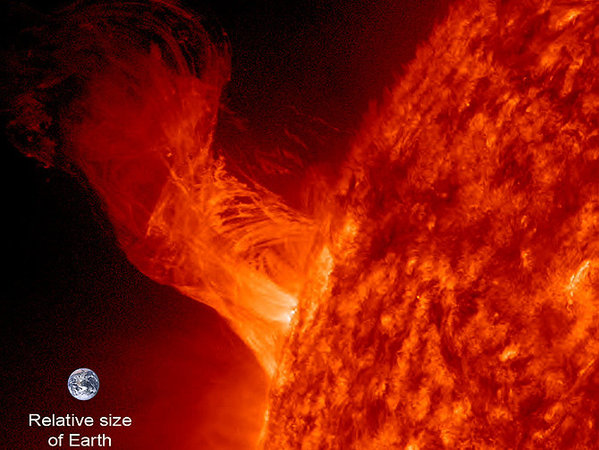 The sun celebrated New Year's Eve with an elegant solar eruption that, thanks to NASA, served to remind us just how puny we Earthlings are.

The space agency published a photo Friday morning comparing the size of Earth with this "relatively minor" eruption. The eruption (see video below), which occurred on Monday over the course of about four hours, extended about 160,000 miles out from the sun.

Our planet is about 7,900 miles in diameter, which means, the space agency said, the eruption was about 20 times the diameter of Earth.

"Magnetic forces drove the flow of plasma," NASA said, "but without sufficient force to overcome the sun’s gravity much of the plasma fell back into the sun."

This comparatively small eruption has nothing on some of the activity that has occurred on the sun as it heads toward the peak of an 11-year cycle.

Alex Young, associate director for science for the heliophysics division at Goddard Space Flight Center in Greenbelt, Md., previously spoke to the Los Angeles Times about the phenomenon.

"Solar activity has a cycle, minimum to maximum to minimum, and it's getting close to the peak of solar maximum," Young said.

The peak will occur sometime this year or in 2014, he said.

The size of a solar flare, Young noted, is a reasonable indicator of the strength and speed of a coronal mass ejection --  a violently released bubble of gas and magnetic fields. Among the categories of flares are C, M and X -- which, in general, translate to common, moderate and extreme.

An ejection, traveling at speeds of 1 million to 5 million miles per hour, takes about one to three days to reach Earth, he said.  Large, serious solar eruptions pose a danger to Earth's technology, as well as any spacecraft and astronauts that lie in their way. The blast of electromagnetic radiation can cause radio blackouts and, in more extreme cases, disrupt power.