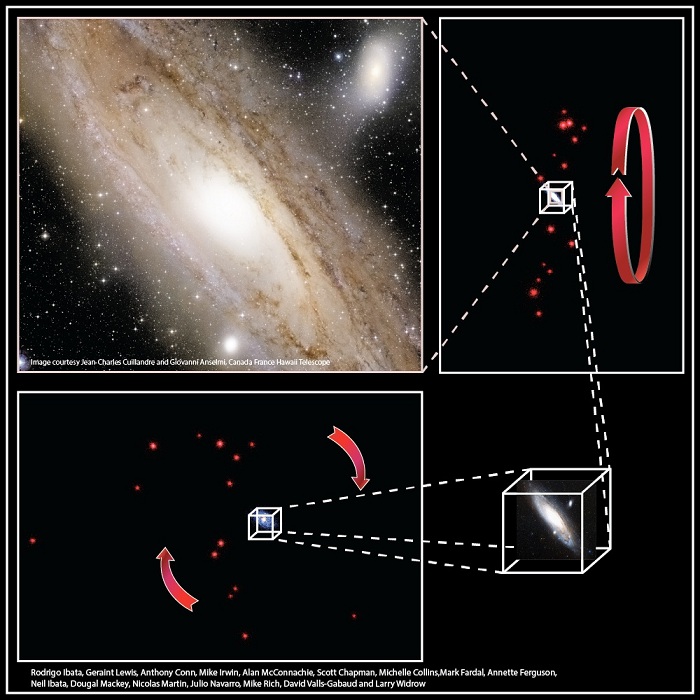 This composite shows the alignment of the satellite galaxies of Andromeda, in relation to the view that we see from Earth (the top left panel shows a true-color image of the center of the Andromeda galaxy taken with the Canada France Hawaii Telescope). New distance measurements allow us to ascertain the three-dimensional positions of the satellite galaxies, which together with new velocity measurements, reveal their true nature as part of a gigantic rotating structure (side view: bottom left panel; front view: top right panel).-

Kamuela, Hawaii – Astronomers using the Canada-France-Hawaii and W. M. Keck Observatory telescopes on the summit of Mauna Kea, Hawaii have been amazed to find a group of dwarf galaxies moving in unison in the vicinity of the Andromeda Galaxy. The structure of these small galaxies lies in a plane, analogous to the planets of the Solar System. Unexpectedly, they orbit the much larger Andromeda galaxy en masse, presenting a serious challenge to our ideas for the formation and evolution of all galaxies.

The findings are being reported on the cover the upcoming issue of the journal, Nature.

While Persian astronomers were the first to catalogue the Andromeda galaxy, only in the last five years that we have studied in exquisite detail the most distant suburbs of the Andromeda galaxy via the Pan-Andromeda Archaeological Survey (PAndAS), undertaken with the Canada-France-Hawaii Telescope and measured with the Keck Observatory, providing our first panoramic view of our closest large companion in the cosmos.

The study culminates many years of effort by an international team of scientists who have discovered a large number of the satellite galaxies, developed new techniques to measure their distances, and have used the Keck Observatory with colleagues to measure their radial velocities, or Doppler shifts (the speed of the galaxy relative to the Sun). While earlier work had hinted at the existence of this structure, the new study has demonstrated its existence to a high level of statistical confidence (99.998%).

The study reveals almost 30 dwarf galaxies orbiting the larger Andromeda galaxy in this regular, solar system-like plane. The astronomers’ expectations were that these smaller galaxies should be buzzing around randomly, like bees around a hive.

“This was completely unexpected,” said Geraint Lewis, one of the lead authors on the Nature publication. “The chance of this happening randomly is next to nothing.” The fact that astronomers now see that a majority of these little systems in fact contrive to map out an immensely large – approximately one million light years across – but extremely flattened structure, implies that this understanding is grossly incorrect. Either something about how these galaxies formed, or subsequently evolved, must have led them to trace out this peculiar, coherent, structure.

“We know of a number of galaxies that have experienced a collision, causing some of their stars to be expelled great distances, in sheets and tails.  However, it’s unlikely that kind of event explains what we are observing,” said R. Michael Rich, who led the Keck spectroscopy team.

While dwarf galaxies are not massive, they are the most numerous galaxy type in the universe: understanding this assemblage will undoubtedly shed new insight into the formation of galaxies at all masses.

For several decades, astronomers have used computer models to predict how dwarf galaxies should orbit large galaxies, and every time they found that dwarfs should be scattered randomly over the sky. Powered by supercomputers, these efforts have resulted in simulations of ever increasing fidelity. None of these computer-created universes have ever generated dwarfs arranged in a revolving plane like that observed in Andromeda.

“It is very exciting for my work to reveal such a strange structure,” said PhD student, Anthony Conn, whose research proved key to this study. “It has left us scratching our heads as to what it means.”

There have been similar claims for an extensive plane of dwarf galaxies about our own Milky Way Galaxy, with some claiming that the existence of such strange structures points to a failing in our understanding of the fundamental nature of the Universe.

“We don’t yet know where this is pointing us” said Rodrigo Ibata, lead author on the report. “It flies in the face of our ideas about galaxy formation, but it surely is very exciting.”

The W. M. Keck Observatory operates the two largest and most scientifically productive telescopes on Earth. The10-meter optical/infrared telescopes on the summit of Mauna Kea on the Island of Hawaii feature a suite of advanced instruments including imagers, multi-object spectrographs, high-resolution spectrographs, integral-field spectroscopy and a world-leading laser guide star adaptive optics system.  The Keck DEIMOS spectrograph used in the discovery was built by the University of California Observatories at UC Santa Cruz, and the Principal Investigator, Professor Sandra M. Faber, was recently honored with the National Medal of Science.  Keck Observatory is a private 501(c) 3 non-profit organization and a scientific partnership of the California Institute of Technology, the University of California and NASA.