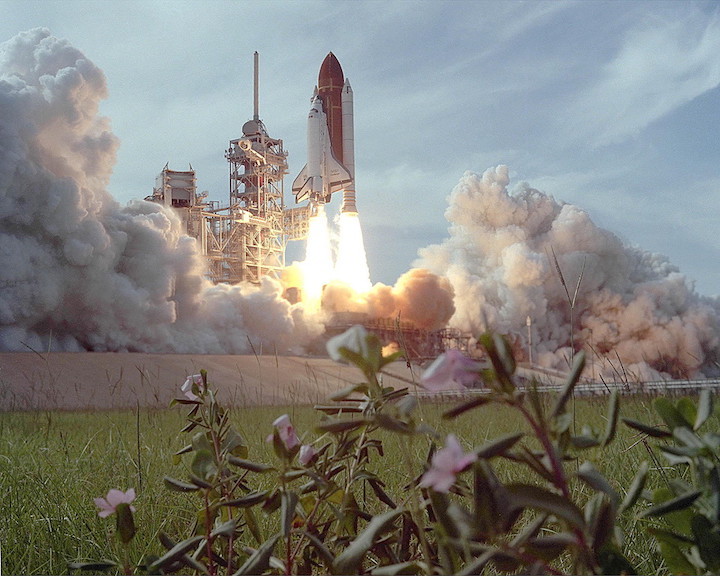 After one false start, Challenger roars into orbit on 29 July 1985, to begin the Spacelab-2 science mission. It would be one of the most dramatic near-misses in the 30-year shuttle program. Photo Credit: NASA, via Joachim Becker/SpaceFacts.de

More than three decades ago, one of the most complex Space Shuttle science missions ever undertaken hung—for the merest of seconds—on the knife’s edge between success and failure, some 67 miles (108 km) above Earth. Heading into orbit at more than 9,300 mph (15,000 km/h) on the afternoon of 29 July 1985, Challenger was in the process of launching seven astronauts and the Spacelab-2 payload of telescopes and astronomical instruments for seven days of round-the-clock science. Three weeks earlier, on 12 July, the Mission 51F crew of Commander Gordon Fullerton, Pilot Roy Bridges, Mission Specialists Karl Henize, Story Musgrave and Tony England and Payload Specialists Loren Acton and John-David Bartoe had endured a hairy on-the-pad engine shutdown, seconds before liftoff. Their second attempt to reach space would prove successful, but today stands as one of the most significant near-misses in the shuttle’s program’s 30-year lifetime. 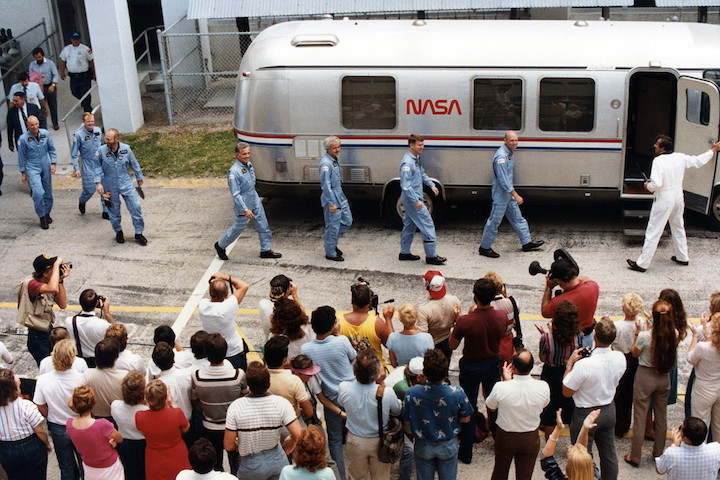 Commander Gordon Fullerton leads his crew out of the Operations & Checkout (O&C) Building on 29 July 1985, bound for Pad 39A and Challenger. Photo Credit: NASA, via Joachim Becker/SpaceFacts.de

With Fullerton, Bridges, Henize and Musgrave up on Challenger’s multi-windowed flight deck, and England, Acton and Bartoe downstairs on the darkened middeck, the 51F astronauts were tasked with testing the first Instrument Pointing System (IPS), a device which was slated to fly its first operational science mission with ASTRO-1 in March 1986. Whilst Fullerton and Bridges rode in the front seats, it was the task of Musgrave—as 51F’s flight engineer—to assist them with monitoring Challenger’s systems during ascent and read back procedures to the pilots in the event of an off-nominal situation.

And 29 July 1985 certainly proved to be one such situation.

Sixty-seven miles (108 km) above Earth, and almost six minutes after leaving Pad 39A at the Kennedy Space Center (KSC) in Florida, Challenger had long since shed her twin Solid Rocket Boosters (SRBs) and was racing towards low-Earth orbit under the impulse of her three Space Shuttle Main Engines (SSMEs). All at once, temperature readings for the No. 1 engine’s high-pressure turbopump indicated “above” the maximum redline, prompting the on-board General Purpose Computers (GPCs) to command a shutdown. From Mission Control in Houston, Texas, Capcom Dick Richards made the call “Limits to Inhibit”, advising Fullerton and Bridges that they were seeing a potentially show-stopping malfunction and the imminent necessity of an abort. By now, Challenger was too high and traveling too fast for the Return to Launch Site (RTLS) option. Two more options remained open: either a Transoceanic Abort Landing (TAL) in Europe or a tricky maneuver, known as an Abort to Orbit (ATO), whereby the shuttle would pulse her twin Orbital Maneuvering System (OMS) engines to augment the two still-burning SSMEs and limp into a low, stable orbit. 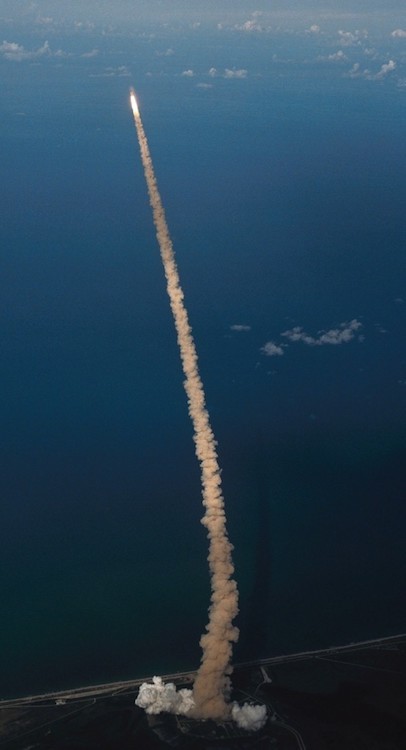 Challenger roars, with seeming perfection, toward orbit on 29 July 1985. Six minutes into the ascent, her crew would brush disaster by a mere whisker. Photo Credit: NASA, via Joachim Becker/SpaceFacts.de

Sitting behind and between Fullerton and Bridges, Musgrave’s instinct was to flick to the page on his knee-mounted checklist which dealt with a TAL abort to a place called Zaragoza Air Base, a joint-use military and civilian installation with a NATO-equipped bombing range, in the autonomous region of Aragon in north-eastern Spain. This particular site had been assigned to 51F for a TAL scenario because the mission’s orbital inclination of 49.5 degrees placed it close to the nominal ascent ground track and enabled the most efficient use of available main engine reserves and cross-range capability.

Next to Musgrave was “rookie” astronaut Henize, who looked on with a measure of nervousness. He was aware that TAL encompassed the six-minute period following the closure of the RTLS “window”, through SRB separation and Main Engine Cutoff (MECO), and he knew that it would only be selected in the event of a major malfunction, such as a serious cabin pressure leak or cooling system failure. Had Mission Control issued the instruction to “Abort TAL” that day, Fullerton would have rotated the abort switch on his instrument panel to the TAL/AOA position and depressed the abort push button next to the selector switch. Challenger’s computers would then have automatically steered the orbiter towards the plane of the European landing site.

“Where we going, Story?” 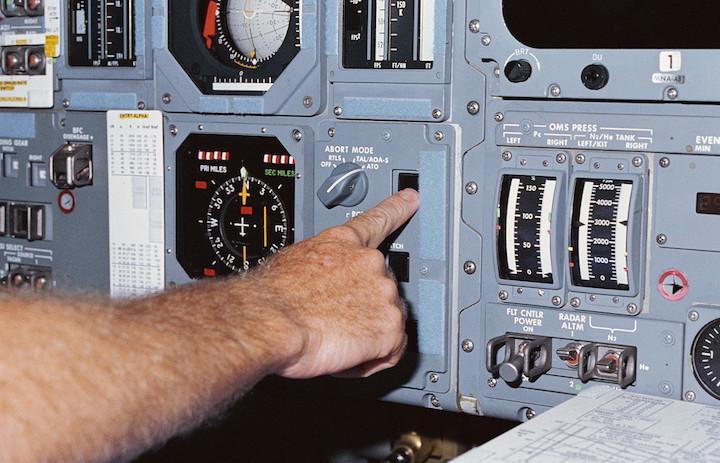 Gordon Fullerton’s finger on the switch commanding the Abort to Orbit (ATO). The rotary switch, set to the ATO abort profile, is at center. Photo Credit: NASA, via Joachim Becker/SpaceFacts.de

Eventually, the call came from Mission Control: “Abort ATO; Abort ATO.” Challenger had achieved sufficient velocity and altitude to undertake the next available option: the Abort to Orbit. In fact, she had missed the closure of the TAL “window” by just 33 seconds! At 4:06:06 p.m. EDT, some six minutes and six seconds into the ascent and hurtling towards space, Fullerton fired the OMS engines for 106 seconds, consuming a large quantity of much-needed propellant, but permitting the shuttle to continue into a lower-than-planned orbit. Two minutes later, at 4:08:13 p.m., the No. 3 main engine data indicated excessively high temperatures. If the “Limits to Inhibit” had not already been applied, the computer would have it shut down. The “inhibit” command effectively instructed the computers to ignore the over-temperature signals and prevented them from shutting down the No. 3 engine. The two remaining engines fired for an additional 49 seconds, shutting down nine minutes and 20 seconds after launch. “We never did get the call for the transoceanic emergency landing,” said Musgrave, “and we ended up making it to orbit and finishing the mission.”

The hair-raising incident on 29 July 1985 represented the only in-flight SSME shutdown ever experienced by the shuttle, and it came as a surprise because all engine parameters had been normal during the countdown, ignition sequence and the first few minutes of the flight. At approximately two minutes into Challenger’s ascent, at about the same time as the SRBs were jettisoned, data from Channel A—one of two measurements of the No. 1 engine’s high pressure fuel turbopump discharge temperature—displayed characteristics indicative of the beginning of failure. Its measurement began to drift and, at three minutes and 41 seconds after launch, the Channel B sensor failed. However, its sibling continued to drift, approaching and then exceeding its own redline limit some five minutes and 43 seconds into the flight, which triggered the shutdown.

The high pressure fuel turbopump discharge temperature data from Channel B of the No. 3 engine, meanwhile, began to climb and passed its own redline just over eight minutes after liftoff. Measurements from its Channel A remained within prescribed limits and, according to NASA’s post-mission report, all other operating parameters relating to the No. 2 and 3 engines were deemed normal. Post-mission analysis suggested that the problem was not with the No. 1 engine itself, but faulty sensors that incorrectly indicated an overheating situation. According to Bill Taylor, then-head of the main engine project at the Marshall Space Flight Center (MSFC) in Huntsville, Ala., these sensors were extremely thin wires, whose electrical resistance changed as they heated up. Otherwise, the performance of the SRBs in propelling Challenger into orbit was described as “nominal”. And despite the challenges faced during that second—and ultimately successful—launch attempt, Mission 51F would recover from near-disaster to stage one of the most successful shuttle science flights in history.