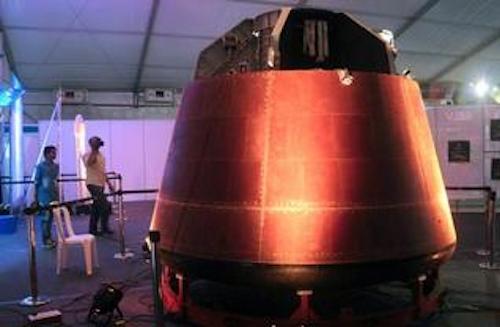 The Crew Module Atmospheric Re-entry Experiment which was test-flown by the ISRO two years ago.— Photo: Thulasi Kakkat

The Indian Space Research Organisation (ISRO) is gearing up to conduct a critical ‘crew bailout test’ to see how fast and effectively the crew module of an intended space mission could punch out from the spacecraft in the event of an emergency.

The test, known as Pad Abort, will be held at the launch pad of SHAR in a month or two, Vikram Sarabhai Space Centre (VSSC) Director K. Sivan told The Hindu in an interaction on the sidelines of the ongoing expo in connection with the World Space Week celebrations at Ernakulathappan ground here.

The test of the technology to eject the crew module to safety forms part of a gamut of critical technologies being developed by the space agency as it awaits the nod from the government for the ambitious ‘human in space’ programme. “While the overall aim is to master the technology that aims at rescuing the crew if a launch is aborted at any stage, the present test will try out the scenario of aborting a launch at the pad itself,” he said.