Another strange light has been seen hanging over Earth from orbit... but it's not your run-of-the-mill UFO. 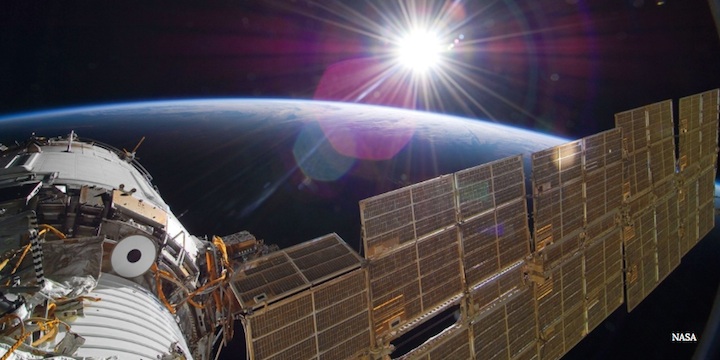 On the internet, UFO sightings are a dime a dozen

Shaky hand-held videos of "lights in the sky", armchair conspiracy theorists seeing odd shapes in archived Apollo photos, horribly pixelated Youtube videos edited from zoomed in portions of otherYoutube videos... all are fair game. But with much sadness, the vast majority can be quickly explained away with an ounce of rational thought. But the news cycle must go on and the tabloid press has a knack for seizing on the occasional blurry and badly edited video with eerie music and reporting it not only as news, but as "proof" that we're not alone in the universe.

Currently making the rounds on the conspiracy-fueled web is yet another Youtube video posted by Streetcap1, a pretty well-known ufologist who studies space videos and photos to find strange artifacts that may not be easily explained. In this recent UFO outing, the posted video depicts edited footage from the live International Space Station HD Earth Viewing Experiment.

Using high-definition cameras on the space station, we can log into the site whenever we like to get live videos 250 miles above Earth. It's beautiful and I strongly recommend you taking some time to check it out. But, sometimes, eagle-eyed viewers have spotted strange goings on in the footage from low-Earth orbit.

In a recent DNews article, I analyzed another video uploaded by the same user that apparently contained evidence of a UFO that seemed to fall toward the limb of the Earth before pausing its descent when NASA "cut the feed." After analyzing archival footage from the ISS HD Earth Viewing Experiment, it quickly became clear what the bright object was. Every 90 minutes at dusk, the space station camera would see the same bright dot drop to the horizon. That dot was Venus.

But why did NASA cut the feed? I hear you cry. Well, NASA didn't cut the feed. The International Space Station passed out of range of the Tracking and Data Relay Satellites (TDRS) that are used to relay the HD video to Earth. The live feed drops signal all the time throughout its orbit, but the fact that the feed just happened to drop as the UFO (Venus) made its descent was enough for some to think "conspiracy!"

In this recent video, posted on Sept. 30, there's yet another bright dot at the limb of the sun, so it appeared Venus was up to its old tricks and pretending to be a UFO. But this time, it wasn't Venus. The explanation was even more mundane.

Once again, after poring over archival footage on the ISS HD Earth Viewing Experiment website for Sept. 30, there would be regular day-night cycles every 90 minutes (the length of one "day" on the orbiting outpost) and frequent "loss of signal" notifications.

At sunrise, the "UFO" reveals itself as a piece of fluff on the camera's housing. NASA (annotation by Ian O'Neill)

Although I can't find the precise moment* that Streetcap1 saw in the live feed, the lower part of this errant piece of fluff (possibly a strand of fiber) appears to be in approximately the same location. Before the rising sun could illuminate the whole of the hair, revealing its true fluffy nature, the feed cut out and allowed the viewer to make up his or her own mind as to what it actually was. In the case of the tabloid press, this obviously meant "conspiracy" and "aliens." In reality, it meant the camera needed a dust-off.

If the feed didn't cut out, this is what the big reveal would have looked something like:

During sunrise, the fluff becomes more illuminated as time goes on. Time progresses from left to right.NASA

So the moral of the story is: Just because there seems to be a weird light in the sky, it's not necessarily a UFO, sometimes it's a very identifiable piece of fluff.

*This may not be the precise moment depicted in the original Youtube video, but it is the only "object" I came across in the footage of the ISS HD Earth Viewing Experiment archives when the forward facing camera was looking toward the Earth's limb at sunrise. So, sure, the original footage could well be a bona fide UFO, but it's way more likely that it's fluff inside the camera's housing. A little skeptical thought goes a long way...