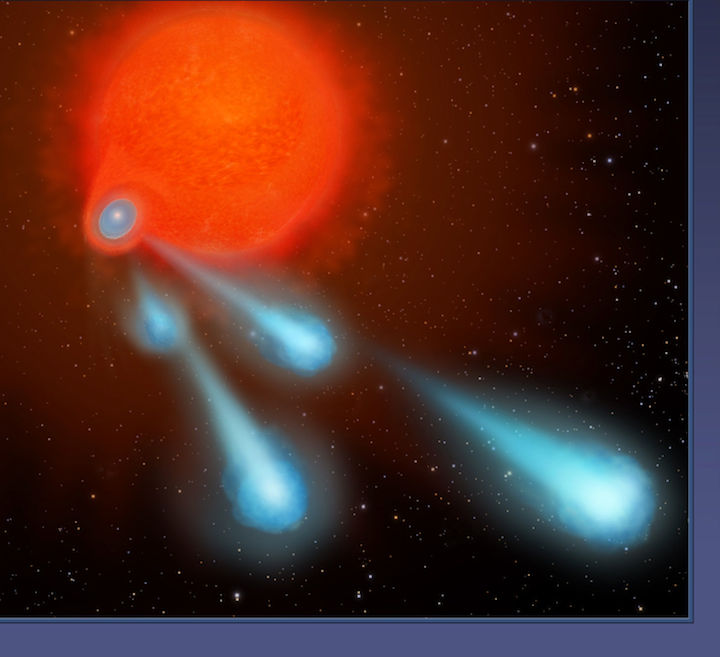 NASA's Hubble Space Telescope has seen planet-size cannonballs of hot gas whipping through the space near a dying star, but the origin of these plasma balls remains a mystery.

The high-speed blobs, each double the mass of Mars and twice as hot as the surface of the sun, are moving so fast in space that they would take only half an hour to go between the Earth and the moon (238,900 miles, or 384,472 kilometers), according to a statement from NASA's Jet Propulsion Laboratory. The observations suggest that these balls of fire have been appearing every 8.5 years for at least the last four centuries, the statement said.

The gas balls were observed near a red giant called V Hydrae that is about 1,200 light-years away from Earth. Red giants are stars that are nearing the end of their fuel supplies and have begun to puff up and expand. While the fireballs could not have been ejected by the star, it could be that an unseen companion star is responsible for the chaos, according to a new study of this cosmic firing squad.

"According to this [new] theory, the companion would have to be in an elliptical orbit that carries [the companion] close to the red giant's puffed-up atmosphere every 8.5 years," according to the statement. "As the companion enters the bloated star's outer atmosphere, it gobbles up material. This material then settles into a disk around the companion, and serves as the launching pad for blobs of plasma."

If scientists can discover where these balls come from, it could also explain other weird shapes seen in the cloud of gas around dying stars, some of which have been difficult for scientists to explain, the statement said.

"We knew [V Hydrae] had a high-speed outflow, from previous data, but this is the first time we are seeing this process in action," said lead author on the new work Raghvendra Sahai, a research scientist at NASA's Jet Propulsion Laboratory in California, in the statement. "We suggest that these gaseous blobs produced during this late phase of a star's life help make the structures seen in planetary nebulae."

The new study used Hubble's observations of V Hydrae that took place between 2002 and 2004, and 2011 and 2013. Supplemental observations were performed by the Submillimeter Array in Hawaii, which looked at the star in submillimeter wavelengths and found knotty structures that may have been produced by blobs sent out 400 years ago, the statement said.

Astronomers had previously speculated that the knotty structures were actually jets of material that emerge from structures called accretion disks, or disks of material that is accelerating around a star. While red giants do not have accretion disks, their companion stars might. Sahai said that the model proposed in the new paper "provides the most plausible explanation" for what the team observed.

The observations showed another surprise: These clumps aren't fired in the same direction every 8.5 years, possibly because of wobbles in the companion's accretion disk, the statement said. V Hydrae is obscured every 17 years, which could happen when one of the blobs passes in front of the star from Earth's perspective.

"This discovery was quite surprising, but it is very pleasing as well because it helped explain some other mysterious things that had been observed about this star by others," Sahai said.

The results were recently published in The Astrophysical Journal.